Selected works by Dominic From Luton 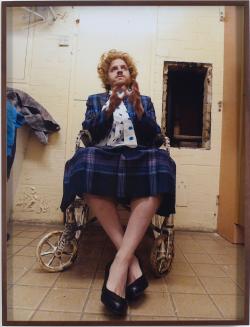 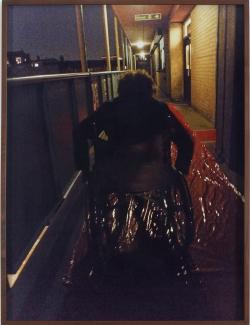 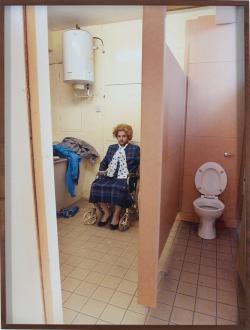 104.5 x 79 x 4.5 cm
In 2004, Luton was voted ‚ÄòBritain‚Äôs Crappiest Town‚Äô, which has made it, for the artist known as Dominic from Luton, ‚Äúa glorious window of opportunity, because no one likes it.‚Äù Escaping from the shackles of dreary suburbia is a well-worn trope of popular culture ‚Äì everyone needs something to kick against ‚Äì but for Dominic, the town itself is the muse, not the spur to head for the bright lights. Take Shoes Off If You Love Luton!, a photo of a man‚Äôs arm, tattooed with a 99 Flake ice cream, holding aloft a single Reebok Classic trainer against a British summer sky. 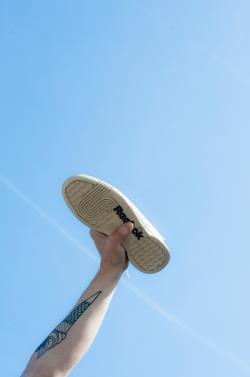 Dominic From Luton
Shoes Off If You Love Luton !

237.8 X 168 cm
The visual language (that of 1980s leisure and childhood summers) announces Dominic‚Äôs particular interests: the iconography of small town Britain. Dominic‚Äôs work draws on decades-old imagery to suggest a country stuck in a cultural rut. In the self-explanatory Dominic from Luton as Margaret Thatcher, the artist is photographed in bad drag, gesticulating as though mid-speech, in a crumbling toilet, or wheeling a wheelchair furiously along the balcony of a council block: political history replayed as panto. 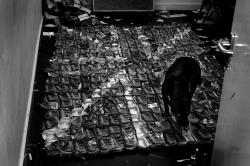 84.1 x 118.9 cm
There‚Äôs a historical stasis in Dominic‚Äôs work reflected in his use of the photograph as an agent of stillness. My Dad‚Äôs Pants, a sad line-up of baggy y-fronts on a radiator, is a photograph that parades its lack of visual interest as a kind of taunt. Dare you not to bother looking, it seems to say. Ignore it. 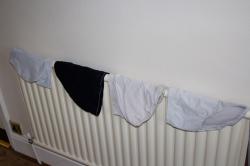 Dominic From Luton
My Dad's Pants

Shoes Off If You Love Luton! wasn‚Äôt chosen as the cover image of the Saatchi Gallery‚Äòs upcoming show for nothing. Whether dressing up as Margaret Thatcher (his ‚Äúmagnum opus‚Äù), his dog Dolly, or a Burberry-clad chav, Dominic from Luton provides undeniable Brit impact.

Most people think Luton is shit, but I‚Äôve always loved the idea of the underdog. Luton‚Äôs got a rough deal over the years, and deserves better than that.

You‚Äôre often in drag. Do you think that helps or hinders viewers to take your art seriously?

Humour‚Äôs not a bad way to engage people, to make them react, though the works themselves are quite serious.

Do you consider yourself a performance artist as well a photographer?

Definitely. I was recently asked to give an artist‚Äôs talk at a working men‚Äôs club. But I was more interested in it being experiential, a shared moment, through a three-minute pop hit in the guise of singer Paul Young.

Is your work distinctly British?

A lot of what I do is autobiographical, and has to do with Thatcherism, which my family bought into. Their current state is a consequence of their trying ‚Äúto better themselves‚Äù.

What if the viewer doesn‚Äôt pick up on all the multiple Brit cultural references?

They don‚Äôt have to have a sense of contemporary British cultural issues. I‚Äôm more interested in people actually liking my work at face value.

Are your performances re-enactments, like Jeremy Deller‚Äôs Battle of Orgreave?

It‚Äôs a rebirth. I‚Äôve thought about recreating when Millwall came to Luton for an epic football cup title in 1985 and basically rampaged through the town. It was also racially motivated. They attacked the referee, tore up the seats, and it was one of the most violent incidents in English football history.

‚ÄúI want my work to communicate more subtly, it doesn‚Äôt have to scream at you.‚Äù ‚Äì Dominic Allan

Dominic Allan is in the most genuine of senses an extraordinary artist. Not just because he has secured for himself a substantial reputation as an innovative artist whose practice takes unexpected twists and turns, but also because he locates an intriguing, fascinating relationship with his home town of Luton at the core of his practice. In September 2004, the town had the perhaps unenviable distinction of coming in at number 1 in a nationwide poll of the crappiest towns in Britain. The Daily Telegraph opined that Luton was a town ‚Äúwhose dreary architecture and lack of leisure and entertainment facilities were derided by those who took part in the survey. One participant described the town as "the brick and iron temple to global pollution". Fulsome and equally uncharitable comments were forthcoming from other quarters, and included, ‚ÄúWhen people ask me where I am from I tend to say Bedfordshire as I don't want to own up to coming from Luton." Dominic Allan‚Äôs work exists not so much to challenge these sentiments, and the insecurities and metropolitan biases they speak to, but more to explore, though his art practice, those things that make him inextricably bound to his home town ‚Äì for better or for worse.

Even before we consider his singular practice, we must acknowledge the alter ego, the moniker, of ‚ÄòDominic From Luton‚Äô that he has adopted for himself. The Bedfordshire town may be the home of the boater hat, Vauxhall cars and the phrase "mad as a hatter", but Dominic Allan is here to let us know that he has an almost bewildering number of ways in which he can and will animate and indeed advance our engagement with Luton, whether we know it or not, whether we have been there or not. But Dominic Allan‚Äôs work is something other than simply autobiographical. Nor is it mere eccentricity. On the contrary, in obliging us to consider Luton and aspects of its multiple identities, the artist is creating for us no end of access points through which we can consider all manner of contemporary conditions such as history, identity, geography, space, place, sport, culture, and so on, particularly the ways in which such things impact on our own lives. Paradoxically, by taking as the starting point for his multimedia practice a provincial town (so apparently insecure about its identity and location that its airport has to be called London Luton), Dominic Allan is in effect able to create for us a window onto and into the wider world. All roads might not lead to Luton, but the artist is here to let us know that through his astonishing and noteworthy practice, Luton leads to all manner of roads.

Dominic Allan is keen to utilise no end of artistic strategies and devices to execute his ideas. Some years ago, he painted the words, ‚ÄòDominic From Luton‚Äô on a bank of horizontal wooden beach dividers, aged and worn by the sea. Over a period of time, the seawater, creating an intriguing spectacle for artist and audience alike, broke down the words, written in water-based paint. Dominic Allan has allowed, or enabled, his creativity to develop in a range of astonishingly original ways that border, to their credit, on the surreal. Consider for example, the intriguing photograph, Shoes Off If You Love Luton! which shows the artist‚Äôs cropped outstretched arm, pointing heavenwards, gripping a Reebok sports shoe, set against a dramatic blue sky. Indicative of Dominic Allan‚Äôs ongoing interest in the imagery and symbolism of the seaside as part of our cultural memory, his outstretched arm bears the precise and bold tattoo of that enduring symbol of a perfect seaside break, the ice cream cone ‚Äì this one complete with obligatory 99 flake.

More recent work by Dominic Allan has seen him presenting himself, in portraits, in the guise of Margaret Thatcher. The decrepit wheelchair on which s/he sits a perfect metaphor for the arguably derelict and dilapidated policies that became known as Thatcherism, that its detractors would argue wreaked so much havoc on towns such as Luton.

This website offers an insight into the breadth and depth of the extraordinary work produced by a fascinating artist.

Seen the price of a barrel of oil lately? Christ! We might have to do like Fatty Gingo and go on holiday in Britain! Imagine that! The Irresistible Lure of Fatty Gingo (aka Dominic Allan) is a welcome riposte to the (g)local hyperbole being pedalled down the road. Abandon the levity of the Altermodern and 'plonk - residencies' in Macedonia. Fatty Gingo, you children of Albion, wants you for a sunbeam.

There's no doubt that Allan's work is redolent of the ethical and pragmatic Orwell of My Country Left or Right or The Lion and The Unicorn ; a world of rotten teeth, bubble and squeak, and uncommon sense. Sort of Brownish. But hey, in Allan's hands this is infused with the sparkle of a candyfloss rush together with a valedictory reflection upon the hangover that is Britain's seaside culture. This is a culture that has always been driven by some substance or other. Sugar; alcohol; smack. How (g)local is that.