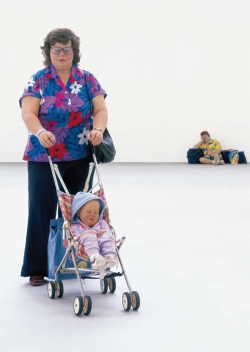 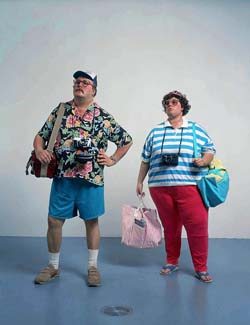 fibreglass and mixed media, with accessories

polyester and fibreglass, polychromed in oil, with accessories

life size
Duane Hanson concentrated on the naked fact of the subject, an astonishingly persuasive counterfeit of another human being as a fully realised physical presence. When describing this sculpture Duane Hanson said: â€˜I like the physical burdens this woman carries. She is weighted down by all of her shopping bags and purchases, and she has become almost a bag herself. She carries physical burdens â€“ the burdens of life, of everyday living. But initially, itâ€™s quite a funny sculptureâ€™. 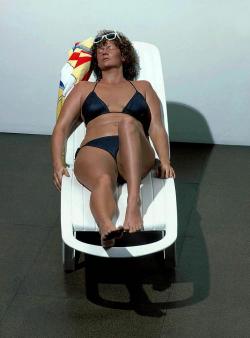 Life size
Duane Hansonâ€™s sculptures are like minutes from a slice of life, frozen for pause and contemplation. And unlike looking at real people you get the chance for an up-close, unblinking gawp. 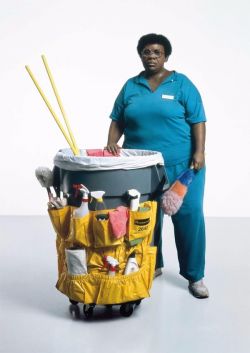 life size
Queenie can be understood on one level as the personification of all those resigned-looking women who drag their bodies around in pursuit of the mess created by the rest of us. But we are made to confront the fact that such women, who are usually invisible and ignored, are not just faceless domestics. 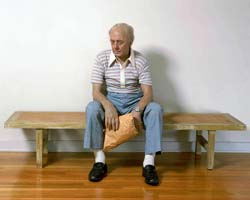 Duane Hanson
Man on a Bench

vinyl, polychromed in oil, with accessories

life size
Duane Hansonâ€™s hyper-real Old Man on a Bench is in a peculiarly modern predicament of drifting or simply existing, merely marking time on his way from birth to death. 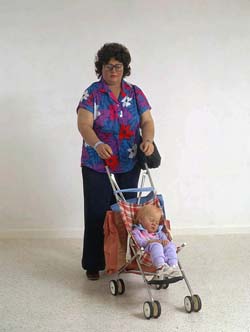 Duane Hanson
Woman with Child in a Stroller

life size
The insistence on the irreplaceability of each person, and on the dignity to be accorded to those who are usually overlooked or spurned as ordinary are central to Duane Hansonâ€™s art and humanitarian vision. 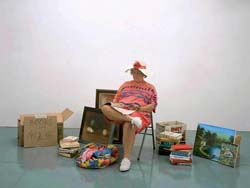 life size
Duane Hansonâ€™s sculptures of people are just too believable. Creating vignettes of real American life, he doesnâ€™t forget a single detail. Casting his figures from live models in his studio, Duane Hanson then adorned them with every attribute of life-likeness from tiny body hairs, varicose viens, bruises, and hangnails. He hand picked their clothes from second hand shops, and accessorised them accordingly. 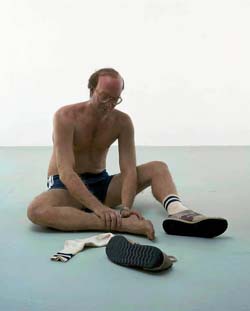 media,
The truly radical nature of Duane Hansonâ€™s procedures â€“ by which casts were made directly from the body and head of a particular but anonymous person with exception of Jogger a doctor friend of Duane Hanson who volunteered for the mold-making sessions, and whose body type fit perfectly with his idea. Reassembled into a complete figure, ilusionistically painted for the most convincing skin-tones and finally dressed in actual clothes. Duane Hanson judged the success of his work insofar as it obscured all traces of his subtle interventions so the figure appeared to be nothing more than a three dimensional replica of an actual person. 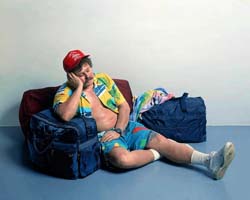 life size
The Traveller snoozes sunburned and hung over in a pile of cheap luggage waiting exhaustedly for a connecting flight home. 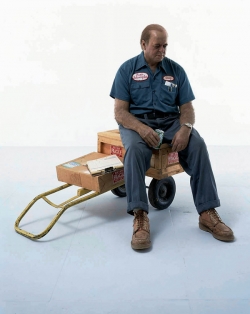 Polyvinyl poly-chromed in oil, with accessories 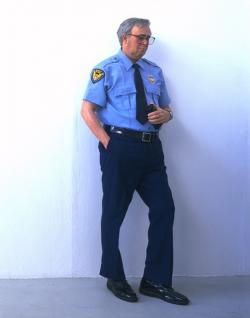 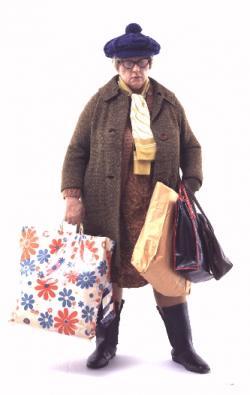 polyester resin and fibreglass, polychromed in oil, with accessories 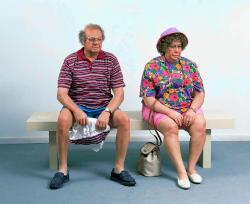 Duane Hanson's archetypes of humanity by James A. Findlay

Apparently from the start, Duane Hanson's primary interest was in recreating the human form. His first extant sculpture is a three-dimensional wood rendering of the figure in Thomas Gainsborough's famous portrait The Blue Boy (c. 1770). Remarkably, Hanson created his version of Blue Boy in 1938 when he was thirteen, while living with his family in Parkers Prairie, Minnesota, an isolated town of 700 inhabitants. According to the artist, there was only one small library in town, which had only one art history book, in which he discovered Gainsborough's portrait of a dashing young man wearing blue satin breeches. Hanson carved Blue Boy out of soft wood, possibly a log, using whatever implements were available, including his mother's butcher knife.
Hanson's early sculptural efforts also included carving his mother's old broomsticks into miniature representations of the human form (or portions thereof), both nude and clothed. Like Blue Boy, these miniatures are naturalistically rendered. Striking a variety of poses, they suggest that Hanson was exploring the different postures that the human body can assume.
In 1941, on a trip to Minneapolis, Hanson visited an art museum for the first time, where he joyfully discovered that actual works of art were on display.

Duane Hanson portraits from the Heartland by Mark M. Johnson

Upon encountering one of these extraordinarily realistic sculptures, the typical reaction of a museum visitor unfamiliar with Duane Hanson's work can be among the most interesting and amusing events one might witness in a museum or gallery.
Hanson's sculptures, especially those that are appropriate in a gallery setting such as Seated Artist, Museum Guard, Janitor or Old Couple on a Bench, are often dismissed as people at rest--sitting or standing like any other visitor. Many visitors may never know that those people they passed were actually artworks. On other occasions a visitor might try to engage the sculptures in conversation. Of course, after a few moments they discover that these are not real people after all!

Duane Hanson was an extraordinary craftsman and an observer of life. In creating an artwork, he first determined the proper pose for the sculpture. Working with a model, the artist took photos until he was satisfied with the figure's position. Then the artist formed rubber and plaster molds of each part of the subject's body--arms, legs, torso and head molds were each created separately. When the molds dried, they were cut off the model and filled with flesh-colored polyester resin reinforced with fiberglass.