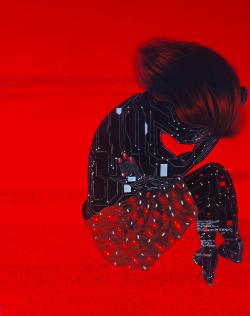 Born in Africa’s third largest urban area, Eddy Ilunga Kamuanga draws influence from the cultural hybridity and structural complexity of Kinshasa. In spite of the limiting conditions imposed by the Democratic Republic of Congo’s volatile conditions, the artist’s paintings emerge out of a materially rich visual world of patterns and textures. Having recently set up an artist collective, Kamuanga’s persevering vision is characteristic of the vibrant intellectual community that continues to flourish in Central Africa. Often as bystanders to the political and social turmoil to which they are subjected, in a place where lives are too often derailed by urban delinquency and crime, Kinois artists are increasingly compelled to produce art that gives voice to their inner desires and hopes for the future. 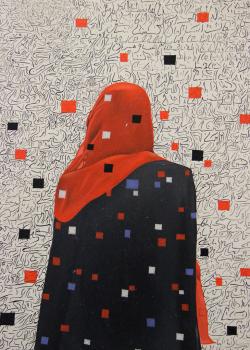 Out of the lingering effects of a brutal colonial regime, followed by a painful struggle for independence and decades of violence and political mismanagement, has emerged a meaningful creative expression. The character of which is as encumbered by the past as it is encouraged by the future. Kamuanga divides his practice between different kinds of commercial and creative work, drawing on forms of advertising and photography as well as traditional aesthetics. His paintings are an amalgam of complementary pop cultural forms, including music, fashion and dance. While influences and histories can be difficult to discern, Kamuanga’s paintings most certainly evade any structural narrative of postcolonial experience. Population sweeping wars, and even the atrocities of the present day, are a world away from Kamuanga’s brightly hued images of a utopian society. They speak of a young culture enraptured by commercialism, grappling with the new joys and anxieties born of African urbanism. 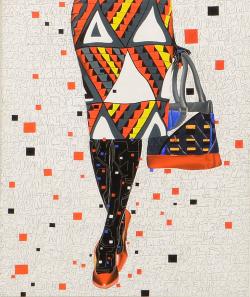 Through Kamuanga’s painting we are introduced to the cultural diversity of contemporary Kinshasa, transformed through an imaginary space of visual symbols and mysterious forms. In one image a woman is dressed in religious attire (Voile, 2014), while another portrays a woman with an elaborate West African hairstyle (Mangbetu, 2014). Kamuanga’s paintings mediate the mass-influence of globalisation on African identity, emphasising the continent’s intrinsic plurality and hybridised cosmopolitanism. A mixture of ancient and modern writings form backdrops for his subjects, which are a kind of visual Esperanto inspired by the communicative strategies of modern advertising. Other references are more personal, such as the woman donning sandals (Elongated Head, 2014), a dedication to the women working tirelessly to secure the welfare of their children in the African metropolis. 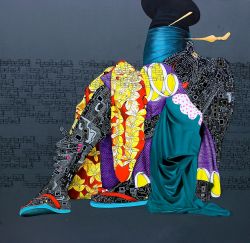 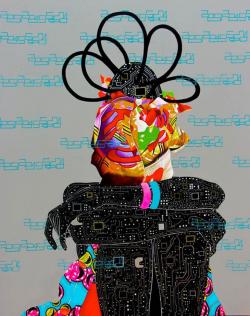 
I was born in Kinshasa in 1991, in the Limelete suburb. I felt my first artistic emotions towards a sculptor's work in my neighbourhood in 1997. After primary school, I was dreaming of becoming a painter. After two years at a classical high school, I went to the Fine Art Institute, in Kinshasa. During this period of time, I was mainly doing watercolours on paper (postcards).
In 2009, I graduated from the Institute of Fine Art and I founded the artistic studio "M'pongo".
In 2010, I then succeeded in entering the Academy of Fine Arts in Kinshasa but left it after three years of my own free will. During this period of time, I started to collaborate with company to finance the studio M'pongo.
In 2011, I designed for the company "I BURST AFRICA" their publicity for their "Giga night's" product.
In 2012, I produced a series of paintings for the "RAW BANK" company in Kinshasa. I was invited as well by the Congolese artist Bill Kouelany at the "Atelier Sahm" in Brazzaville (D.R.C.) and integrated "Kin ArtStudio" (KAS Project) of the Congolese artist Vitshois Mwilambwe Bondo. Recently, i had the opportunity to be exhibited in the Biennale OFF in Dakar (Senegal).