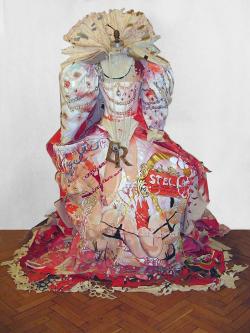 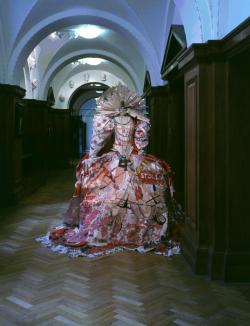 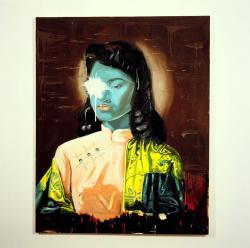 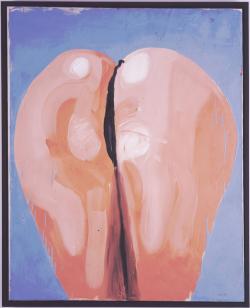 153 x 120 cm
Liz Neal is a young artist living and working in London. Her rude and crude paintings and installations have an earthy nobility; painterly rhapsodies with a coarse grittiness.

240 x 120 cm
Nealâ€™s Paul is the boy toy du jour; shown together with Chandelier, heâ€™s the ultimate sex club icon. Modelled like a 19th c. parlour painting (think Maja by Goya), Paul is a bit of sleaze for the most decadent connoisseur. Richly painted in Rococo tones, Neal replicates a true sense of Versaille-ish folly; the ornate bordello-style lamp sculpture dripping with all too-real looking â€˜pearls of loveâ€™. Luxurious and filthy to the core, Neal dreams up a Regency House Party of her own â€“ one far more intriguing than Channel 4â€™s â€“ but definitely too naughty to be aired! 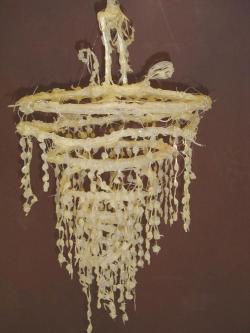 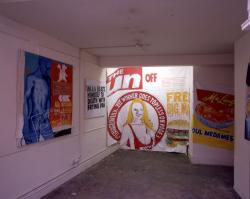 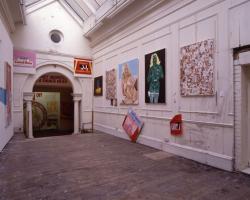 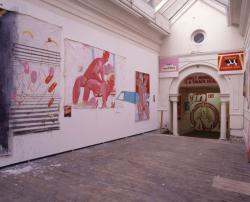 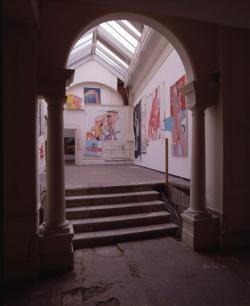 Liz Neal
Wild About Nothing 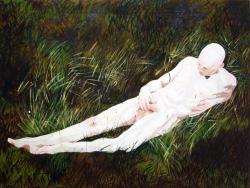 In Book IX of Homerâ€™s The Odyssey, Odysseus recounts how his ships are buffeted by winds for nine days en route from Troy to Greece. They finally come to rest in a land populated by Lotophagi, men who eat lotus plants. The lotus eaters are benign but their food is not, sending Odysseusâ€™s men into a trance-like state in which they lose all desire to return to Greece. Instead, oblivious to Odysseusâ€™s orders, they wish only to remain in a lotus-induced state of dreamy forgetfulness.

Indolent decadence permeates Liz Nealâ€™s new works. An exquisitely painted Native American couple are locked in an embrace against a deep blue background. Their total immersion in each other belies the inevitable doom awaiting their way of life. Nearby a butch young man poses, flexing his muscles. Text is scrawled over his taut body, â€˜Fuck me in the morning when I can feel it.â€™ Sexual and sensual arousal are only momentarily possible in those brief hours of consciousness after waking, before the day grows older and the very capacity to feel is replaced by half-conscious lethargy.

Nealâ€™s manipulation of paint expresses the physicality of flesh and continues a long tradition that starts with Titian. The freedom of her brushstrokes emphasises the transitory nature of what is caught on canvas - youth inevitably fades and pleasure is followed by comedown.

Liz Neal at the Transition gallery

Liz Nealâ€™s Lair of the Lotus Eater is a vision of wild sexual abandonment. Images of women swirl naked on the ceiling, butt-cheeks spread, looking down on the viewer with intent. Legs, thighs, breasts and faces overlap, merging into a riot of flesh. Scenes of Bambi and Thumper frolicking emerge from a hallucinatory tableau of multiple blow-jobs. The room is a homage to experimentation, fantasy and debauchery.

Whilst living in North London between 2001 and 2003, Liz Neal used the front room of her flat as her studio â€“ and quite literally, painted herself in. Every inch of wall space, including the ceiling was covered with unstretched painted canvas, stitched together and then stapled to the walls. Material draped onto the floor, paintings leant against walls, and sculptures were worked upon in remaining spaces. Walking into her flat was like entering an Aladdinâ€™s cave of porn magazines, fake jewellery, emptied tubes of oil paint, and spectacular visual decadence. Yet this was an Aladdinâ€™s cave with a particularly English domestic feel â€“ an opening in the installation through patio windows provided a view onto a quiet 70s residential estate in Highgate.