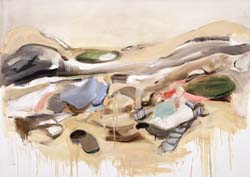 The earliest of the five works, Melting Out is a typical example of Neel’s working process. Based on her own observations from the natural world and on subjects from the historical record - in this case news photographs of Ötzi, a 5,000 year-old mummy from the mountainous Austria-Italy border area - it marries abstraction with representation by way of a diverse range of painterly techniques.

The paint itself seems to thaw, melting away to reveal bits of rubbish and human possessions such as a tie, shoe, belt and sock in a nondescript landscape of an ambiguous historical or geographical setting. The cycle, one feels, seems set to continue, as the objects themselves decay back into abstraction. 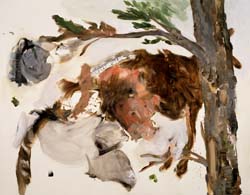 ‘Popped Off is inspired by the dark moral content of a well-known short story by Shirley Jackson, “The Lottery”, in which the inhabitants of a New England town engage in a deadly annual rite of scapegoating: the selection of a sacrificial victim by means of a public sweepstake. Neel combined her interest in this American parable with her own experiences growing up in Vermont to explore the human tendency toward ritual violence in the context of nature.

Cornered, a wild animal has run up a tree only to be fired upon by its human trackers. Its bloody, mangled carcass is caught in the moment of destruction, a casualty of a deep-seated rural tradition.’ Jasper Sharp 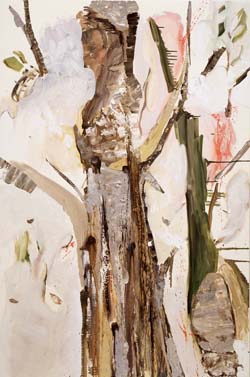 Taking its cue from another well-known literary reference - Washington Irving’s 1819 classic, "Rip Van Winkle", the eponymous protagonist of which falls asleep under a shady tree and wakes, after a short dream, to find that twenty ears have passed - Rip’s Tree Stripped investigates the violent passage of time by re-imagining the landscape from the from the tale. Light, spring colours behind the tree’s torn and twisted bark convey an image of change as a force both creative and destructive, simultaneously ensuring the continuous birth of new entities while hastening the decline of others. As in all of Neel’s works, her title in this case suggests a literal content or action while simultaneously referring to a more elusive set of cultural associations. This linguistic strategy complements her manipulation of visual cognition within her paintings. 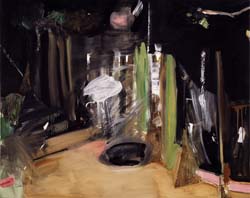 Sucked Up employs a wide range of painterly techniques to create a field of suction, a swirling vortex into which everything on the work’s surface is dragged. Neel consciously engages with the history of painting, working with a palette knife, brush and oil paint to flick, drip and smear alternate areas of thick impasto and relative opacity. Still images from video games, plucked from the internet and sieved by the artist’s imagination, are at the work’s origin. "I paint from a landfill scattered and layered with fragments of our culture," Neels states. 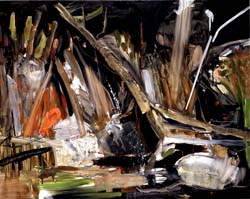 Swamp Dump depicts the fallout of a gruesome contemporary parable: the 1996 crash of a low-budget American passenger aircraft in the Florida Everglades, a national park thick with sawgrass and populated by crocodiles and snakes. Wreckage, much of it human, was strewn over a huge area, complicating the task of rescuers who were unable to find any trace of victims’ remains for several days. With bold brushstrokes and a predominantly murky palette, Neel portrays the nightime scene of a natural habitat contaminated by man’s macabre intrusion. 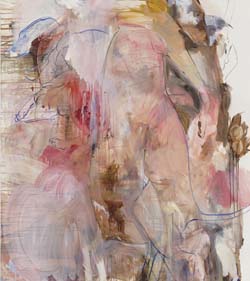 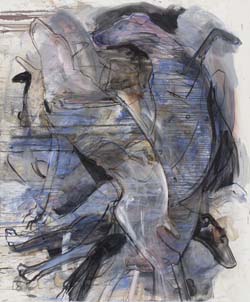 Reminiscent of Duchamp’s Nude Descending A Staircase, where movement was represented using visual devices more associated with film than painting, Neel’s Good vs. Evil captures all the violence and frenzy of a dog fight in a way that consciously challenges two dimensional form. Rendered as stylised line drawings, Neel’s dogs overlap with cartoon simplicity, their stiffness comically diagrammatic, drafting out the idea of a battle rather than a scene. Instead the action takes place through the feverish gestures of the painted ground where sweaty and bruised black and blues perform turbulent rituals of aggression, trauma and glory. 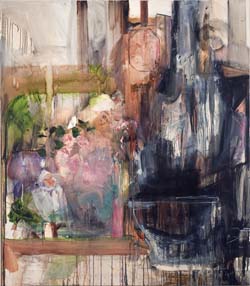 GALLERYâ€“GOING
A Branch of a Truly American Tradition David Cohen

Elizabeth Neelâ€™s must-see debut solo at Gasser and Grunert offers a radically contrastive response to landscape to that of Mr. Berlind and his tradition: There is nothing in her temperament to suggest puritan empiricism. She paints what seem at first to be neo-romantic jungles and forests â€” dense, wild, pulsating with life and danger. An accompanying text by John Reed informs us that the artist culls all her images at random from the Internet. Maybe the World Wide Web, in its chaos and unlimitedness, is a kind of contemporary wilderness: The locus of the sublime. Nature or â€™net, however, Ms. Neel is herself a force of nature, painting with a majestic, violent bravura that recalls de Kooning and Francis Bacon.

Her work also bears a striking similarity to certain British painters from the 1980s that Iâ€™d be very surprised if she is aware of â€” Maurice Cockrill, Ken Kiff â€” as well as the Australian landscape painter Sidney Nolan. Perhaps there is a kind of eternal recurrence among modern romantic painters of exuberance when they are drawn to nature and its archetypes.

The wonder of her images is that with all the splash, splutter, scumble, pouncing, and dabbing going on there is amazing chromatic clarity.Many of her effects make you aware of the surface, yet she builds dense intimations of deep space. This comes about through an extraordinary balance of big, restless shapes and gestures, on the one hand, and tight, finessed detail on the other, with the washed out and the painterly fearlessly juxtaposed. It is very rare to encounter such a combination of energy and assurance in a young painter: Ms. Neel looks, literally, like an old master.


A vital fusion of abstraction and representation is shrewdly inter-weft in the paintings of Elizabeth Neel. At Gasser and Grunert, her first New York solo exhibition, is a series of oil on canvas, aggressively gushing from the walls, with titles like Strung Up, Popped Off, Sucked Up and Flushed Out.

On the canvases at once, lush strokes of vivid colour pulled with others, and yet a sudden indication of imagery, equally lush, pushed and pulled, in and out of depth -- fractured trees, a mangled carcass, an abandoned beach bed. But these are not mere nature scenes and still-lifes; Neel unearths disparate visual material from the Internet, where she recovers cultural splinters as diverse as news feeds and discarded clothing. The artist plays with our cognitive recognition to the extent that there is little contrast between the often ambiguous fragmented forms and the juicy vital colours that melt into each other as easily as they shoot out--a kind of deconstructed and then reconstructed nature, where there is an emotional currency of colour, clusters and fields.