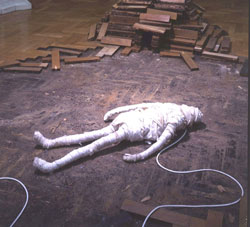 Francis Upritchard’s Save Yourself plays on all the worst b-movie gags – unearthed beneath the gallery is an ‘ancient’ tomb devised by a Pharaoh with a very Ed Wood sense of humour. Her mummy-on-the-cheap (a mass of rags, with a knowing glass eye), unearthed with all his burial treasures – a bar of gold (pack of fags), and earthly treasures (kitschy teapots), comes replete with his own curse: vibrating spasmodically, he might actually be frightening if his electric cord wasn’t in plain view. 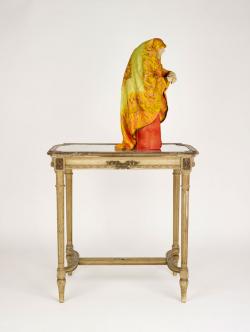 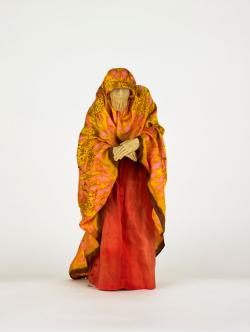 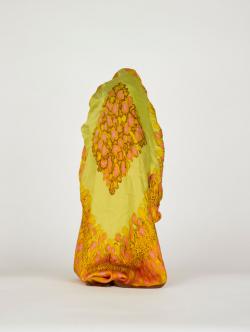 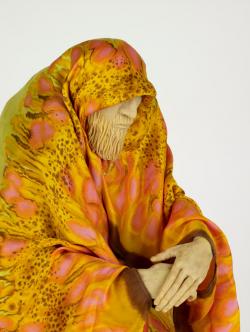 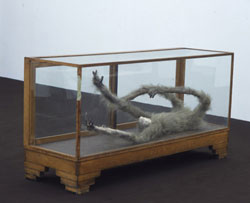 Francis Upritchard’s Sloth looks like something gathering dust in the dark and creepy archives of the Natural History Museum. On closer inspection, it perhaps might have been hidden away for very good reason. Bejewelled, with all-too human hands, this seemingly long-dead relic is unlike anything in the known animal kingdom. Upritchard’s tampering with history again: she’s made a plausible missing link, a falsified curios, playing on horror-movie expectations of a collective consciousness. 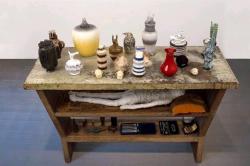 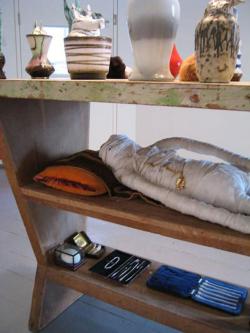 Francis Upritchard is a doctor of contemporary voodoo. Borrowing her aesthetic from the kinds of weird and wonderful mementos treasured in archives like the Pitt River Museum and the Wellcome Collection, Upritchard forges a dark and twisted history of her own. Haunting and perverse, The Travellers Collection is a curio cabinet: it’s shelves house the untold magic of grotesque clay pots, ’shrunken’ animal heads (snarling real teeth!), bizarre instruments which seem to be carved (from possibly human!) bones.

A make-shift funerary chamber for her little mummy (with an all-seeing real glass eye), containing all the treasures he will need to accompany him to the afterlife. Upritchard’s is an art of falsifying information. Appropriating readymade artefacts, hexing the viewer’s imagination to wilfully reinterpret: a car boot sale cookie jar as a mysterious ancient urn, tacky tourist shop paraphernalia as prize trophies from a long lost empire. Upritchard’s a magpie Indiana Jones: inventing creepies and curses from stuff that probably exists in your attic.

katemacgarry.com - Francis Upritchardâ€™s Travellerâ€™s Collection
These are the fragments Francis Upritchard has shored against her ruins. Thrift store pots have been remade as canopic urns, ancient Egyptian repositories for the organs of the dead. A gift from a relative, an unwanted wedding present or a memory of a day out, even the tackiest ornament once played a small symbolic function in someone's life.

physicsroom.org
New Zealand-born artist Francis Upritchard in conversation with curator, Harry Pye, May 2001)
Harry Pye: Being an artist in East London is considered to be very trendy these days, do you enjoy telling people youâ€™re an artist?
Francis Upritchard: "No and if someone tells me that theyâ€™re an artist I immediately presume they make really shit art. (Laughs). Telling people that I am an artist doesnâ€™t really explain anything about what I do with myself.

harikunzru.com - Useful Magic: Francis Upritchardin the Attic
The attic occupies a special place in the western cultural imagination. It is a site invariably linked with history and the unconscious, a clutter of half-forgotten objects behind a locked door whose meanings often slide into the register of gothic horror.

guardian.co.uk
Save Yourself by Francis Upritchard - Becks Futures 2003: shortlist

telegraph.co.uk - A matter of life and death
As the Beck's Futures 2003 exhibition opens, nominee Francis Upritchard talks to Polly Corrigan about taxidermy, colonialism and how to blow 20 grand

artspace.org - Doomed, Doomed, All Doomed: Francis Upritchard
Francis UpritchardÂąs first major solo exhibition in New Zealand.
Comets in the heavens. Apparitions and convulsions. Faced with a sense of Impending catastrophe what are we to do? The prophets squat in the dust of the marketplace, pointing to weird omens in the sky.