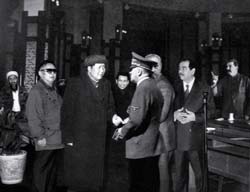 (Published in the catalogue of Gao Brothers' exhibition New York, 2006)

Gao Zhen and Gao Qiang have been on the artistic scene of contemporary art in China for the past twenty years, and together they have created a body of work under the name of the Gao brothers which can unequivocably be seen as an allegory of human emotion.

The two brothers are originally from Jinan in the northeast of China where they patiently went about creating installations and videos, doing performances and photography, often off the beaten track. They were also interested in setting down their ideas and published various essays on society and contemporary art. In addition, they became known as independent curators, promoting the work of young artists and film makers. However, in the past ten years or so, they have resolutely turned towards photography: photography with a conventional camera and then with a digital camera, which they were one of the first to use in China. A visitor to their studio-gallery in Dashanzi in Beijing, where they have been for the past two years, cannot fail to see them, always together, sitting in front of their computer, working with evident pleasure and amusement on their latest works.

The work of the Gao brothers has slowly evolved and in this exhibition in Paris, we can see the different phases and concerns, which nonetheless form a coherent work. In the large size photographs, simply and directly photographed and meticulously re-worked on the computer, we are first struck by their perception of the world governed by the imaginary, but filled with men and women who visibly belong to our ordinary world, accessible to everybody; by a constant concern for what is human or rather human emotions; and finally, by their use of theatrical staging close to mystical or religious paintings.

This view of photography in the service of the imaginary can readily be seen as a part of the history of photography in China. In the early beginnings of contemporary art in China at the end of the 70's, a whole generation of artists declared their artistic independence by distancing themselves from a documentary and sentimentally realistic view of photography in conformity with the dictates of Communist propaganda.
The Gao brothers as well as Wang Qingsong, Liu Wei, Rongrong, Miao Xiaochun or Yan Fudong, to name just a few photographers taken at random who work in different styles - professional photographers or artists turned photographers - share a certain belief that photography allows them to over-develop their imagination, to enrich their imagination nearly to excess, to play in an exaggerated way on the confusion inherent to photography: the tangible gap between reality and imagination which exists only in photo or video.

(Published in the catalogue of Gao Brothers' exhibition in Moscow, 2006)

Gao Zhen and Gao Qiang have been working together for more than 20 years under the artistic pseudonym the Gao Brothers. Their work has marked the beginning of the new wave in the Chinese art,the wave that has started before the beginning of economical and political reform and opposed the style of official propaganda.The brothers have espressed themselves in traditional forms of Fine Art, in literature, curator's projects However; presently their main specialization is photography and video.

The story of Gao Brothers has started in their native Shandong province in the North-East of China. In the latest years they live and work i Beijing.Since the beginning of their career the Gao Brothers have used art-photography as special kind of opposition to the official reportage.Today the complex compositions of Gao Brothers make the new social situation in Chinese society a subject for an analysis.And this new situation is a moment of breaking and transition,when the economical boom and political changes bring about the loss of habitual psychological and cultural coordinates.

In this context the issue of identity became unbelievingly relevant. The collective 'us' being replaced by the personal 'me' is a more severe problem than the economical gap.Gao Brothers have expressed the identity problem in their famous "Embraces" series of 2000 where a lot of strangers experience the feeling of embarrassment, the impossibility of integration, connected with the a-priori artificial situation of a collective performance. One of the main means,used by the Gao Brothers -- the body language.With its help they express complex emotional and intellectual reactions of their characters. This is where the artistic exposure comes from -- the technique, often used by the Gao Brothers in their sets. For many generations the Chinese civilization has tabooed the exposure of naked body and the eccentric gesture of the artists, masterly using the embarase and at the same time the naturalness of the moment, when the covers are put down ,creates a striking metaphor of the traditionally closed culture that suddenly opened up under the influence of the Western world.