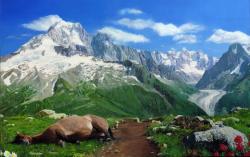 23 x 37 cm
Gareth Cadwalladerâ€™s Dead Horse captures a vast Alpine mountain range in mesmerizing detail. The picturesque beauty of the scene is, however, disturbed by the striking presence of a dead horse in the foreground, which suggests the calm aftermath of some unseen struggle. Cadwallader made this painting in response to specific personal experiences, but its themes of conflict and resolution may also be understood as a metaphor for the creative process of painting itself. 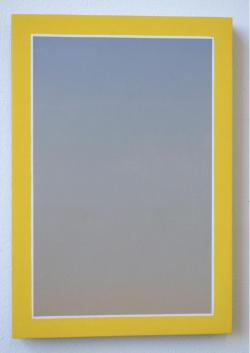 apollo-magazine.com
Striking work came from mono-chrome, photo-realist, pencil draughtsman Adam Bainbridge, who broaches the surreal and suburban within his subject matter (see above), and painter Gareth Cadwallader, who successfully revises old masters with the same jaw-dropping meticulous attention to detail but with a contemporary edge and amusement.a

bbc.co.uk
Alongside ex-Camberwell student Matthew, Slade graduate Gareth Cadwallader has developed his own style of Abstract work strongly influenced by the early work of Philip Guston. He has already sold to photographer Mario Testino, amongst others and is working on his first solo show towards the end of 2006.