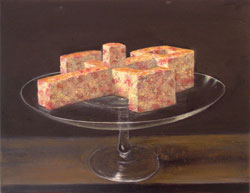 Ged Quinn
Cake In The Wilderness

36 x 46 cm
A cherry cake, beautifully painted in the demure style of a 17th-century Dutch still life, sits atop a glass dish. The shape into which it has been cut, a sort of mock-medieval cross, is that of Spandau prison, the infamous Berlin detention centre and symbol of uneasy Cold War accord to which a handful of high-ranking Nazi officers were banished following their conviction at the Nuremberg Trials. Demolished in 1987 following the death of its last inmate Rudolf Hess, its physical remains were ground to powder and dispersed into the North Sea. At a stroke, Quinn transforms this complex and uniquely sinister structure into a mass-produced teatime treat, impermanent and consumable. 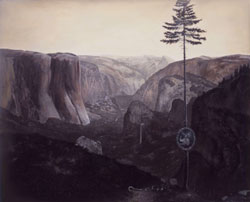 Ged Quinn
God Knows Where This Is

183 x 225 cm
Based on a image by pioneering 19th century landscape photographer Carleton Watkins, God Knows Where This Is lays bare the contradictions inherent in America’s idealist appropriation of sacred Native American hunting grounds to create its iconic national parks. Quinn employs the original photographâ€™s tonal qualities of light and dark to reproduce a vast canyon of ’wilderness’ stretching further than the eye can see. The harmony is shattered by an incongruous framed portrait, hanging from a single, lonesome pine; ’wearing’ the antlers of St. Hubert, the American poet and libertine Walt Whitman is portrayed in the moment of his fictional suicide, blowing his mind out with another symbol of American freedom, the Colt 45 handgun. This land of freedom and innocence, Quinn implies with no little vehement, is no more than a constructed illusion of false escape. 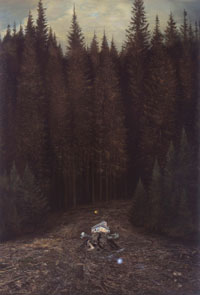 Ged Quinn
The Ghost Of A Mountain

267 x 183 cm
Dwarfed by a bank of towering trees, in a scene reminiscent of the Northern European Romantic tradition, a tiny building stands in a wooded clearing. It is the Berghof, Hitler’s mountain retreat, transplanted from Berchtesgaden to Mount Purgatory, which rises up from the forest floor. The house has been daubed with graffiti, ’tagged’ with the words Urizon, Los, Luvah and Urthona, the four Zoas from William Blake’s unfinished 1797 poem of the same name. Quinn’s choice of this oblique reference to the ambiguous association of myth and Christianity, and the otherworldly, fairy-tale setting he has fashioned for a sickening reminder of an all-too-real real person, is intended to ask the question: what happens when myth replaces history? 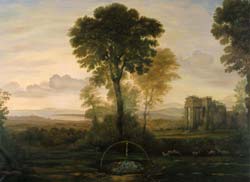 Ged Quinn
True Peace Will Prevail Under The Rule

183 x 250
True Peace Will Prevail under the Rule is a contemporary reworking of Claude Lorrain’s 1666 Old Testament depiction of Jacob, Rachel and Leah at the Well. In the well, bathed in heavenly morning sun, Quinn has placed a serene image of Mount Carmel, home to a dissident religious community assaulted and eventually destroyed by the FBI in the Texan town of Waco in 1993. He plays with the idea of adopted identity, replacing Jacob, renamed Israel by God in The Book of Genesis, with David Koresh, the community’s leader formerly known as Vernon Howells, who took his constructed identity from the names of a Persian king and the Lamb of God. Suspended above the town hangs the image of a pre- Copernican universe, thought to have been centred around the earth, a motionless centre of concentric rotating spheres. 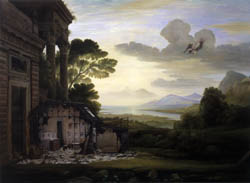 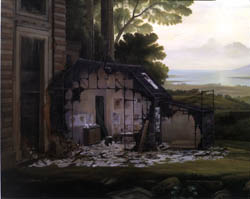 183 x 250 cm
With its skewed timeline and patchwork Arcadian setting, The Fall sees Quinn continue his rummage through history, myth and popular culture. Trailing smoke and swathed in combat-plane camouflage, the downed body of poet and dramatist Antonin Arnaud hurtles from the sky in a reprise of the proud angel Lucifer’s fall from grace in Milton’s Paradise Lost. He tumbles in a scene borrowed from Claude Lorrain’s Landscape with Abraham Expelling Hagar of 1668, and towards the burnt-out shell of a ramshackle building. It is Thomas Edison’s Black Maria, the world’s first purpose-built movie production studio, littered with the drawings and spells created by Arnaud in the last, anguished years of his life. Any true sense of time or place is discarded as one iconic image crashes into another to leave a chaos of chronology and open-ended associations. 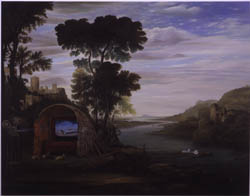 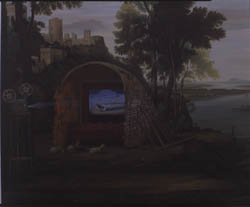 183 x 235 cm
Again based on a work by Claude, this time Landscape with the Arrival of Aeneas at Pallanteum from Anglesey Abbey, Quinn’s constructed composition questions the role of art as a vehicle for social improvement. Part of Aeneas’ ship has been recycled into a miniature cinema, complete with beaming projector, rows of red velvet seats and a scene from Tex Avery’s MGM classic Little Tinker. Bound into a raft and drifting listlessly in the nearby river, another part of the vessel that carried the Trojan hero on his journey through the Underworld bears a similarly precious cargo â€“ the Discovery, that pioneering craft from Stanley Kubrick’s 1968 cult science fiction movie 2001: A Space Odyssey. Quinn leaves us contemplating another maze of complex references, some recognizable and some more obscure, which challenge conventional systems of pictorial decoding. 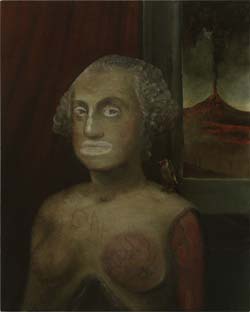 Ged Quinn at the Wilkinson Gallery

Ged Quinn makes paintings that revisit the tradition of European painting. His seductive canvases, which seem so recognisable, slowly reveal an extravagant mix of European art history and contemporary imagery. By superimposing contemporary references onto grand backdrops of European painting Quinn develops his own environments and mythologies.
In The Ghost of a Mountain a building is situated in a clearing at the intersection of forest paths. The image plays neatly with Heidegger's idea of the 'Clearing' as a location for 'the Happening of Truth'. For Heidegger, it could be said, art is not a tangible product; rather, the actuality of art is the clearing it produces, and its ability thereby to reveal truth. The building within in the clearing is, importantly, Berghof: Hitler's mountain retreat. Quinn resituates Berghof -- now daubed with graffiti -- from Berchtesgaden to Mount Purgatory, which swells up from the forest floor. The ambiguity of this retreat/sanctuary is further played with by its positioning within the forest, where the (irrational) memories of nature myths inform the (rational) twentieth-century products of Western culture (the apparently vandalised holiday home of a fascist leader), as well as by the particular symbols with which the retreat has been 'tagged'. On the walls of Berghof are the names of the four Zoas from Blake's unfinished poem (1797) of the same name: Urizon, Los, Luvah and Urthona. The four Zoas are the disparate and disordered faculties of the eternal Albion in his postlapsarian state, thus referencing the ambivalent meeting of myth and Christianity.