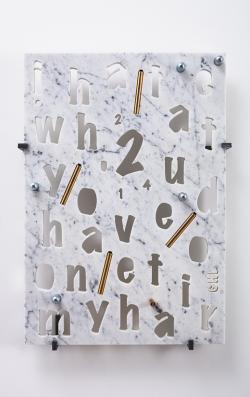 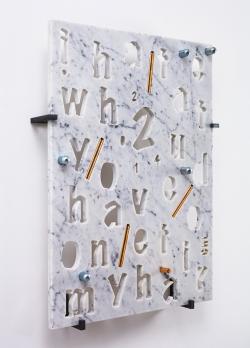 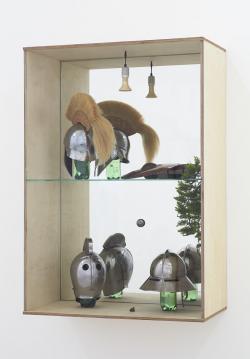 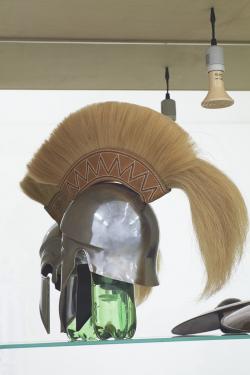 George Henry Longly
Take it, it's yours

George Henry Longly is a name from the trendier corners of London‚Äôs art scene. He‚Äôs been carrying the tag of ‚Äúone to watch‚Äù for a few years but this looks like his time now. He‚Äôs already featured in several group shows at top contemporary art galleries this year, from David Zwirner in Mayfair to Laura Bartlett in Bethnal Green, gone solo at the Laure Genillard gallery in the West End and, this week, he sticker-bombed Shrimpy‚Äôs, the hip restaurant in King‚Äôs Cross (on view until Sunday).
Longly DJs, too, at the oh-so-provocatively titled Anal House Meltdown club night-cum-art show at the Vogue Fabrics club in Dalston, alongside two other artist hotshots, Eddie Peake and Prem Sahib. The trio, who feature in the ICA‚Äôs current subculture show at Selfridges, have also linked up with artists such as Anthea Hamilton and Nicolas Deshayes in a scene whose energy and camaraderie recalls the YBAs‚Äô Nineties explosion.
The 35-year-old Longly is wary of the labelling. ‚ÄúWe‚Äôre all very close, and it‚Äôs something that people find interesting and want to highlight,‚Äù he says. ‚ÄúBut from my point of view it‚Äôs about mutual respect, an appreciation of people‚Äôs work, alliances and just getting on with people.‚Äù
We are sitting on a bench in the shade of trees overlooking Sou Fujimoto‚Äôs Serpentine pavilion. Longly, puffing on the occasional cigarette, is discussing his plans to transform the delicate, open cloud of white steel bars which proved a perfect place to relax over London‚Äôs long balmy summer for his Park Nights event tonight. The pavilion, he says, is an ‚Äúamazing structure. I love it. And I like being able to climb on to it ‚Äî it‚Äôs super interactive.‚Äù
His idea for his one-off for the Serpentine ‚Äî part of their regular series based on artists‚Äô responses to the pavilion ‚Äî is to put on a fashion show with a difference.
‚ÄúThe fashion show is this intense period of theatre, performance, emotional response, movement, sound and lighting,‚Äù he says. ‚ÄúThat was a good way for me to think about how to deal with this space, because it‚Äôs a pavilion anyway and fashion shows happen in these sort of places.‚Äù

We are delighted to invite Contemporary Art Society members to join us for two very special studio visits with leading artists George Henry Longly andAdam Dix
The work of George Henry Longly is informed by a range of contradictory references, from principles of minimalism and post-minimalism to craftwork and classicism. His sculptures merge a research agenda located around notions of museology with the aesthetics of postmodern design from of the 1980s. His practice brings together empirical analysis, gesture and sentiment in consideration of materials and their composite form. During the residency at K√ºnstlerhaus Schloss Balmoral he has worked with Ebinger ceramics to create a series of sculptural works that explore domestic and industrial approaches to production.