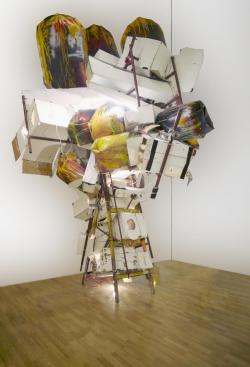 Graham Hudson
All My Exes Live In Tesco's

“All My Exes Live In Tesco’s is quite an expressive piece. You try to have a conceptual rigour, but spontaneity is important as well. I was interested in how you can make a really big thing out of nothing. I used a ladder instead of building a frame, and the gesture of it is quite reduced. I strapped cardboard boxes to it, and attached the bin liners to a fan so they filled with air and then poured paint on them. In one way it’s like a car crash mess, but also very lively and poetic. I’m interested in conservation, and this work is like a performance or instruction guide. Because I have to remake it every time it’s shown, it can never look exactly the same twice. I think of my work in relation to object production rather than a documentation of the final thing. I always video the installation of the work so there is a record of the experience and action of making it, and I hope that if it is recreated in the future it might retain its fragile and delicate quality.”


We can't quite remember in which film it was that Kevin Costner said this, and, well, quoting Costner about anything is maybe a little naff in the first place but we like the quote and it sort of seems apt, standing, as we are, Graham Hudson and I, one quiet, still and heavily peaceful evening in Chelsea Parade Ground looking across at his house that has stood there since April when he built it and which has been standing there since then right up until tonight when the sky is just getting dark and the lights inside the house are on and it looks so beautiful and peaceful.

Well, he built it. He did do that. And yes, some did come. Some students looked at what he did and came out and did it too. As we walk round the ground tonight I see a couple of students painting the roof of their own little shack. There are maybe, what, four, five, six houses out here along with Graham's, in this quiet little shanty town.

Maybe, if he was staying here longer, there would be more. Though, however many came, I don't think it would have been enough for Hudson. He was always, I think, after a revolution, albeit one that might not be televised. He wanted the students to throw their homework on the fire and to give up being taught in favour of coming out here and trying to learn.

But you never get what you want. Earlier when I arrived there was a guy called Brian here, talking about all Hudson's stuff. He had come across it, thought it was amazing, and has just been photographing it ever since. The revolution may not be televised but it has been photographed and written about and recorded, a bit, in here. Brian seemed not to understand why everyone just hasn't completely got all this. I know what he means. But I also know that a lot of people don't get into things until they are told they can get into them. It's all just fashion. And fashion is history close up. Though I don't know if that's the case with Elle Korea ('That's Korea, not Career,' says Graham dryly). They were here to do a fashion shoot against all this stuff down here. Apparently Vogue are on their way too. And there was that piece in the The Times the other day. And that piece in Art Review. 'The art lot don't come down here,' says Graham, 'They're not interested. Except the guy who does the music programming at Tate; he passes through here and he was really into it.'