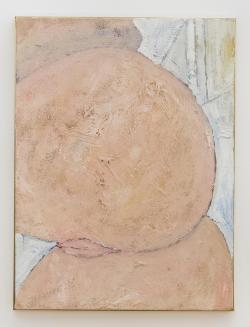 The Irish Institute of Hellenic Studies in Athens is pleased to announce an exhibition of new painting and sculpture by Guy Rusha.
Rusha plays on the idea of the influence of art history and its traditions- the portrait in oil, the bust on a plinth, the still life. With his persistent re-renderings of existing forms, Rusha seems to be attempting to put himself through a kind of self apprenticeship of art history. In Rushaâ€™s practice historicised images are continuously repeated, re-worked and redressed, creating a snowballing mutation effect with every version.
The plinths and images Rusha makes function as signifiers for museum culture. For the figure he puts in the frame or atop the obviously DIYâ€™d plinth, simultaneously pay homage to whilst travestying its referents. Not only are they obviously made too quickly (to pass as â€˜the real thingâ€™ so to speak), but they also exalt in bad taste. The paintings are ugly; painted in acid colour and deliberately evade the slight of hand of sophistication to soften them round the edges. This deliberate openness in Rushaâ€™s approach- the want to be frank about his position in relation to his predecessors,
makes for images that resonate on the basis of this directness.

The Sunday Painter is pleased to announce the opening of SHE LOOKS NICE, a solo presentation of new works by London based artist Guy Rusha.
To Accompany the exhibition the artists has produced a unique limited edition artwork, â€˜Olympic Posterâ€™, 2012 which can be viewed here.
Guy Rusha mostly makes paintings but also makes sculptures. The paintings tend to be of women. They are painted quite thick but the final images themselves are sparse. In terms of detail, the faces are usually extremely simple, almost verging on being blank, except for a couple of specifically telling features. These might be a piece of jewelry such as a gold earring or a stroke of neon eyeshadow. These details are homed in on, exaggerated slightly in scale and colour. As such, they seem to say more about the person looking than the subject being painted. His sculptures tend to sit more in the realm of found materials. Recently he has been using sponge. These started life as a quick response to Yves Klein. Carved into sharply angular, slightly figurative forms and steeped in black oil paint, they appear to masquerade as classical sculpture. There is something flip about them, irreverent perhaps. They take on the look of classical sculpture as seen in black and white photographs in art books but without all the labour. They are indeed physically extremely light.
In terms of his approach and subject matter both his painting and sculpture refer to a specific tradition in art that involves institutions, museums, the idea of great works and their weightiness. He has said in the past that his decision to paint women enables him to converse with this tradition from his position as young artist looking at what his predecessors called art. But there is usually something slightly odd about the actual look of his painting and sculpture that prevents it from sitting comfortably within the realm of nostalgia or classicism. They are full of hard edges and too sharp angles. They have a distinct minimalism, something that looks unburdened or even newborn. Collectively they share resemblances, becoming slightly generic looking as if painted from the same vague memory. They seem always a little out of reach. I would say that there is an anachronism about them but itâ€™s one that doesnâ€™t refer strictly to the past.