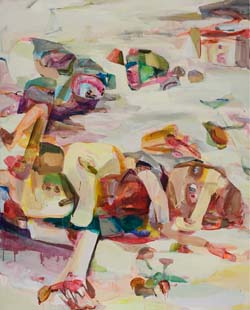 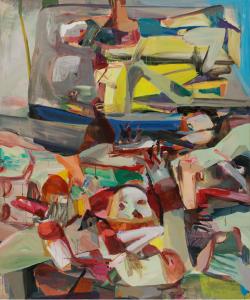 Acrylic and tempera on canvas 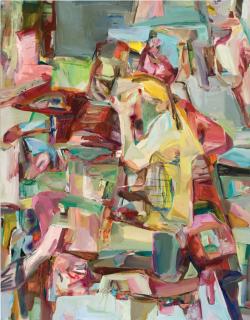 The museum is currently closed to the public but will reopen on Wednesday, September 2, 2009 with two shows celebrating Korea . Haeri Yoo: Paper Deep, an intensely contemporary installation, will run simultaneously with Gods, Demons, and General: Icons of Korean Shamanism, an historical look at Korean culture.

‚ÄúLike a child views the world, my work segregates and playfully mutates the realities present. Beauty and violence, light and dark are left in an inconclusive disharmonious impasse‚Äù, says Yoo. She explores ‚Äúhumor, sexuality, and the overt and subtle relationships that haunt the space between beauty and violence‚Äù. The formal sensibility of her native Korea translates into sensitivity to negative space and mark-making, producing works that are ‚Äúbuilt up, painted, drawn, pasted and re-shaped from a large repository of smaller explorations‚Äù.

Haeri Yoo‚Äôs paintings on canvas and wall fill the other half of the gallery. Despite the physical separation of being on the opposite side of this smallish space, the show holds together as one seamless soiree. Yoo‚Äôs works harken back to her days as a child in Korea where an appreciation of nature has now become a fictitious fantasy of figures and vignettes that are as mixed up as they are magical. She works quickly, and with little or no abandon. Like her show-mates, Yoo manages to take the viewer to a previously unknown place where the moments it takes to get one‚Äôs bearings are filled with cold, hard energy.