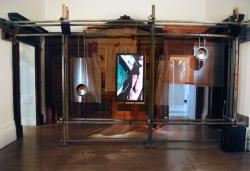 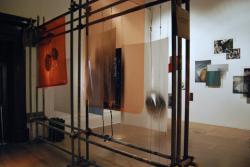 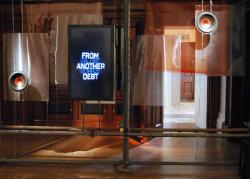 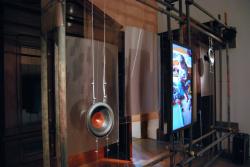 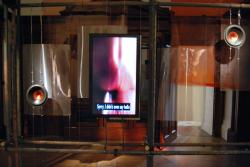 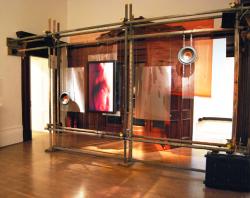 LONDON-BASED ARTIST IS GLEANING BEAUTY OUT OF OUR CELLULOID PAST
May 2012, by Dean Kissick, Wired Magazine

Hannah Perry works in the space between analogue and digital technology to create audiovisual installations. The 28-year-old artist (pictured) works with light boxes, monitors, projectors, speakers and coloured gels to build her environments, and then performs within them using contact microphones, drums, sampling machines and VHS mixers.
"Analogue footage works on a very rich RGB colour separation and is made up of horizontal lines," she explains, "whereas digital footage is made up of square coloured pixels, which produce entirely separate types and qualities of moving image. Combining the two creates textures in a painterly way, but also references different spaces and times within cultural history."
Perry, based in Manor House, north London, finds raw footage in video libraries and stock-footage vaults, as well as recording every-day life on her iPhone, before mashing it up on software such as Ableton, After Effects and Final Cut. "I process my footage so that it might look like something off YouTube," she says, "but it's new."


INTERVIEW: HANNAH PERRY
September 2012, by Notsopoetry, Not So Popular

The Royal Academy is an imposing place to wander into, even with a purpose. On all sides rise up column and, the greying courtyard has had some of the best feet in art history stomp across it. Of course, with so much history instilled (and installed) into the very fabric of the institution it is easy to be blinkered to what the art school is currently producing. Walking through the back entrance of the gallery into the art school, a mixture of half-finished pieces by students and armless Grecian statues haphazardly line a path towards the canteen.

I am here to speak to Hannah Perry, who works with video collage and whose installations venture between the past and the future. Fusing comments on popular culture with the representation of women with disco-ball cars Perry‚Äôs art is fun but serious. Influenced by the personal she ventures from the internal to the universal to create though-provoking videos which have to be seen in person (if her password secure website is anything to go by‚Ä¶).
When did you first start getting into creating art with video?
I‚Äôve always been into sculptural stuff and I was into a lot of snap-shot type photography years and years ago, the sort of grass-roots, going around with your camera like Nan Goldin‚Ä¶ but I found the snapshots a bit too personal and wasn‚Äôt comfortable with my position in making work like that. I guess the snapshots transformed into a video camera. It was ‚ÄòFiorucci Made Me Hardcore‚Äô by Mark Leckey which absolutely blew me away. Also, seeing the way VHS was used by Dara Birnbaum. She was the first person to mix VHS‚Äôs who did this fast cut up thing‚Ä¶ she got footage of 70‚Äôs Wonderwoman and set it in a new light.

In a conversation with Francesca Gavin last month you said, "I see the clips from TV as being as much my personal memories as the ones from my own life, yet also having resonance with our collective national consciousness." Much of your work blends footage you've shot yourself, personalized footage shot by strangers, and the ersatz human experience offered by TV and adverts. It assumes pop cultural references naturally interpolate into one‚Äôs personal memories.
That quote was in reference to my editing style. I was explaining how my editing derives from listening to hip hop and dance music, and music production techniques. I look at the looping and sampling of sound, and then use those methods to play with audio and video in a similar way.
When I was a kid I would raid my brother‚Äôs room while he was out, and listen to his tapes. He is over 10 years older than me and was heavily into the rave scene. I distinctively remember nicking a rave tape from 92, so I was probably about 7-8. The stories about what he got up to were also influential.
The rave scene is one pop-culture reference, among many, that reoccurs in my work. I feel close to that youth/social movement and the music that spun out of it, but I have always felt slightly outside of it too, which made it easy to romanticize the whole thing until it became a part of what I did in my late teens.
If we think of rave culture as the last British subculture before the mass use of the Internet, it may well be being revived to a certain degree, but in an age where everything is consumed at a much faster pace, the cache of collective knowledge is being recycled in imagery and reference and its continual reviving from the archive of popular culture. As we live in an age where things are increasingly fragmented, i am looking at the media as if it provides us a basic image of our lives, (meanings, values) to form a totality to which these fragments can be understood.
I film a lot of my own footage, like my nieces playing, or record conversations with my friends. In the same context, I collect the personalized footage shot by strangers. They say that when you go to the cinema, you look for yourself in films‚Äô characters. I‚Äôll often choose footage because it‚Äôs the type of banal experiences that I have had, but with different characters. Within my work I like to confuse and intertwine my footage and that taken from an advert or a sitcom.