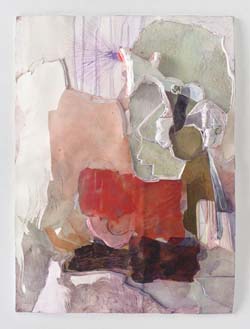 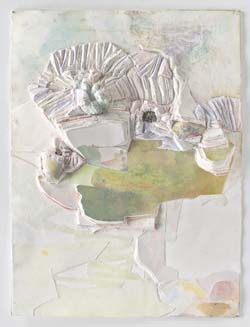 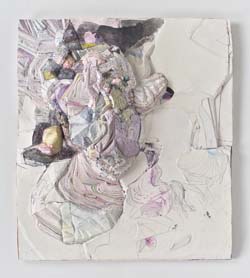 
"Mixed media" are the two words this writer most hates to see on a wall label beside an artwork or on the checklist of a gallery exhibit. What a cop-out, he grouses, knowing full well that if the artist accommodated him and listed all the ingredients of a particular work, there might be little or no room for the rest of the show. Things have gotten more complicated since Picasso first slapped a piece of that day's newspaper onto the canvas he was working on. Developments in technologies, materials and techniques over the last century can make one yearn for the good old days when everything was oil or stone or marble, with an occasional watercolor thrown in to lighten things up. Of course, like most good old days, things were never that simple, either. But one can dream. Until someone like Hilary Harnischfeger wakes you up.

Walking into her first solo show, "Ni Chomei," installed in the back room at Moody Gallery, means entering a fantastic world of bejeweled and glittering pools, a shimmering waterfall spilling out of thin air, a copse of purple and red and silver and pink trees, and a jagged red lightning bolt blazing through silver clouds. It's like strolling into a cartoon, an animated landscape out of Fantasia or Japanese anime. It feels like that, in part, because of the nature of these works -- they're sculptures that read like paintings. All but two are wall-mounted, and most of these are more two-dimensional, like paintings, than three-dimensional. Materials play into this reading as well. Harnischfeger's primary medium is clear resin, into which she casts an array of glitter and sequins, fake pearls and other doodads, in a process that's analogous to pigment suspended in an oil-based medium. The only thing that's missing is the canvas. Guess that's what walls are for.
Comparison with anime is apt for another reason. Harnischfeger spent a formative part of her childhood in Japan, and it is telling that she has chosen as the title for her show the street address in Tokyo where her family lived. Surrounded by Japanese art and artifacts while growing up stateside, her work is informed with Asian aesthetic traditions. Target (all works are 2001) is a landscape of waterfalls and rocks that runs down the wall like an Asian landscape on a silk scroll. However, the rocks are bright silver and the predominant colors are pink and red, hardly earth tones. Harnischfeger's materials remind one of such techniques as enameling, ceramic glazing and inlay. Her work is hard and shiny and colorful, qualities more associated with decorative arts, such as bowls, plates, vases and furniture, than with the representational. In a way, Harnischfeger is bringing the two together; Target takes its title from a small target-patterned "rock," about two-thirds of the way down, that suggests cloisonnĂ© enamel work. Another work here that draws on Japanese traditions is Sai-kei, that group of purple and red, etc., trees. The title refers to a kind of bonsai in which a miniature landscape is created, sometimes incorporating small figures. Here, the "bonsai" is made of lamĂ© fabric; the trees rise behind a glittery wall of similarly colored bricks. But it's certainly strange to have the words "bonsai" and "glittery" in the same sentence.