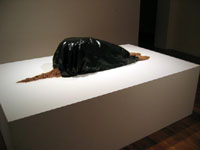 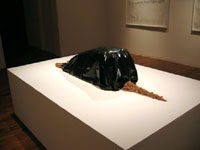 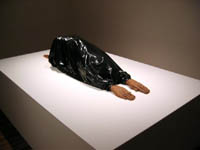 114.3 x 243.8 x 152.4 cm
Working with found materials and constructed forms, Huma Bhabha reworks the familiarity of everyday objects into creepy inventions. Something between a primitive species and space alien, her Untitled is both ghastly and sympathetic. Set atop an altar-like plinth, Bhabha‚Äôs figure prostrates in submissive position. Shrouded in black, hands outstretched as if in prayer, it echoes humility and reverence; its aura of calm perversely interrupted by a rigid tail trailing out from behind. 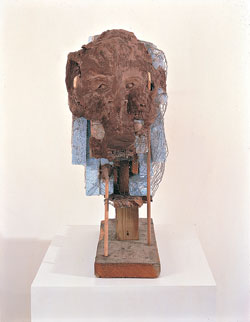 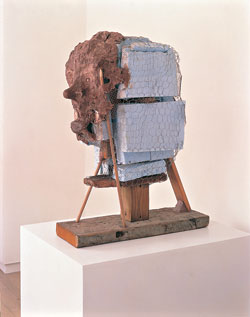 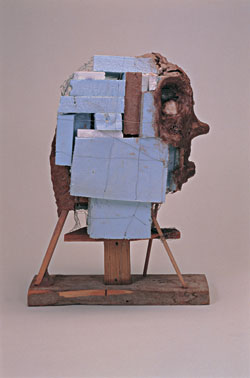 89 x 63.5 x 86.4 cm
Humorously referencing both tribal masks and modernism, Huma Bhabha‚Äôs Museum Without Walls presents the anatomy of a sculpture as voodoo construction. Using the traditional materials of sculptural moulding Bhabha constructs a skeleton of process, her formalist assemblage doubling as anthropomorphic entity. Laying bare her media and their function, Bhabha infuses her work with suggestive narratives. Museum Without Walls stands as both totem and architectural model, creating a contemporary primitivism from cultural refuse. 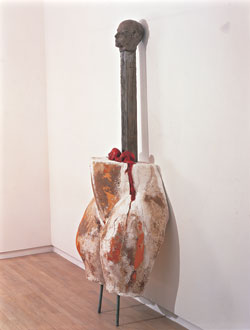 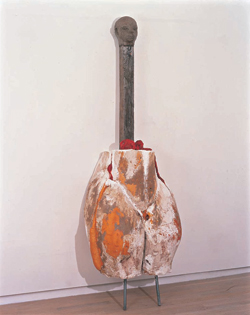 Huma Bhabha
Waiting for a Friend 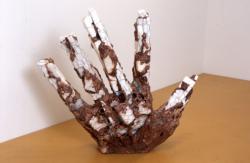 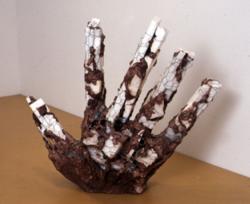 61 x 81.3 x 43.2 cm
Picturing an upraised hand crudely crafted from impoverished materials and rendered in humble scale, Huma Bhabha‚Äôs International Monument is less an icon of peace than a remnant of a forgotten ideal. Boldly exhibiting the methods of sculptural process as finished work, Bhabha‚Äôs International Monument is conspicuously incomplete in pre-casting form; the potential for bronzed immortality is discarded in preference for the meagre and degradable. Lumpy crackling clay clinging to flimsy mesh and crumbly Styrofoam creates an intriguing tactility, echoing the fragile nature of the body. Rethinking the authoritarian qualities of ‚Äòmonument‚Äô as reflective of the human condition, Bhabha‚Äôs sculpture is both destitute and empathetic. 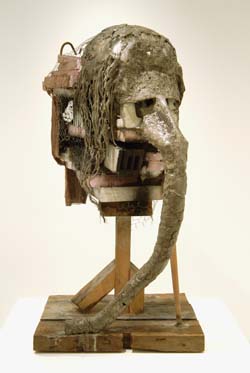 139.7 x 96.5 x 71.1cm
Central to Bhabha‚Äôs work is the idea that materials embody a kind of mysticism or power that can be activated or enhanced through the artist‚Äôs handling. Sell The House is a small sculpture made to the scale of architectural models or museum relics. Assembled from construction staples such as wood and bricks the body of her sculpture acts as a ‚Äòfoundation‚Äô for embellishment. Utilising the aged and weathered qualities of her materials, Bhabha heightens their totemic connotations by adding clay to create an animistic form or mask. The ‚Äòunfinished‚Äô appearance of the sculpture both exposes the artist‚Äôs process of making and the materiality of the construction, framing these as something cryptic, compelling, and haunting. 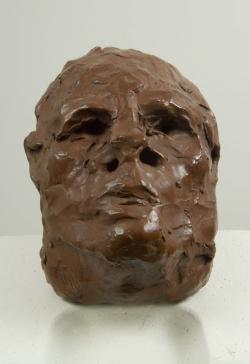 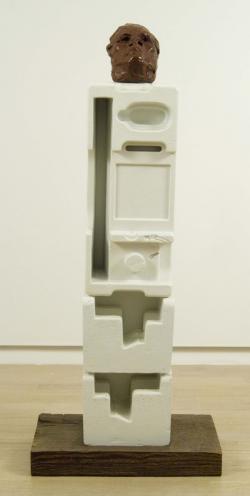 113 x 48.3 x 25.4 cm
Huma Bhabha is well known for making sculptures from inexpensive media such as Styrofoam, wood, and clay. She uses these materials for their immediacy: they are easy to work with and shape, reveal her making processes, and convey a sense of mystery in their ‚Äòordinariness‚Äô; they are also the materials traditionally used in bronze casting to make the ‚Äòoriginal‚Äô of the sculpture for the mould. In A.B. however, Bhabha doesn‚Äôt only allude to this process, but follows it through to its ultimate conclusion. Picturing a clay head crowning a stack of readymade packing, A.B. is actually a cast and painted bronze. Its surface is uncanny in its detailing: the rough-worked clamminess of clay and gauged and dimpled texture of Styrofoam pose convincingly as the real thing, giving a sense of power and import to the discarded original, and questioning the conventional values of ‚Äòhigh‚Äô and ‚Äòlow‚Äô art. 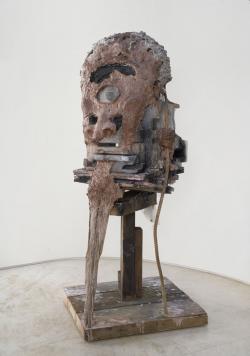 Huma Bhabha
Man of No Importance

165.1 x 104.1 x 76.2 cm
One of the ideals in modernist sculpture was that materials should refute illusionary form: rather than trying to ‚Äòtrick‚Äô the viewer into believing that metal or clay might actually be flesh or hair, it was thought that materials should resemble themselves and be material-like. Bhabha draws upon these notions in a contemporary way. Man of No Importance exposes the exact methods of its construction, and the worn and brutal qualities of the materials give the sculpture an aura of ancient ritual and reverence. In Bhabha‚Äôs work, however, this ‚Äòhallowedness‚Äô is used to humorous effect as her mythological character, made from bits of scrap, becomes the physical embodiment of impoverishment, temporality, and ideological failure. 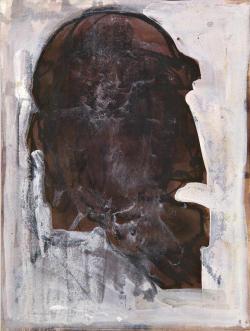 watercolour, pastel, pencil, ink on paper, mounted on board

Bhabha’s Untitled Drawing approaches drawing with the physical sensibility of sculpture. Mounted on board, the image is made more ‘object-like’ than if it were simply on paper. Bhabha uses a variety of media, each imparting their own distinct ‘feel’ and texture: indelible stains of watercolour suggest a poetic fragility underlying thick layers of greasy pastel, opaque ink washes, and gritty graphite residue. Bhabha’s physical process of drawing becomes enhanced through the earthy hues which record the evolution of the piece with a rough, organic aesthetic. The strong contrast of light and dark tones creates a deceptive spatial illusion; the abstract image, reminiscent of a mask, emerges with the three dimensional intensity of sculptural relief. 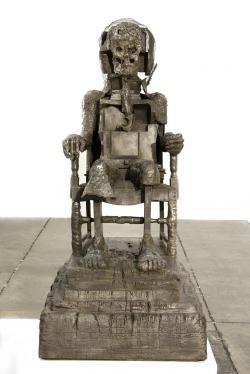 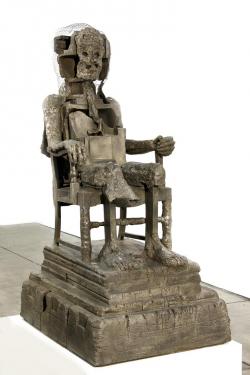 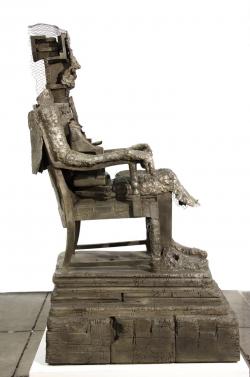 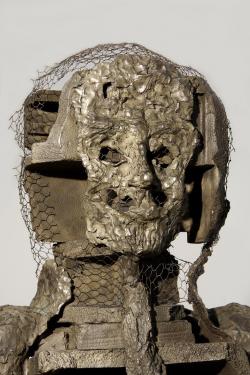 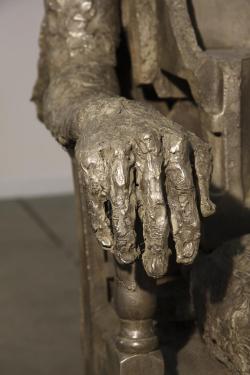 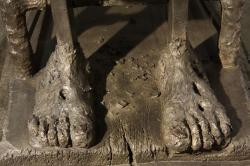 177.8 x 83.8 x 104.1 cm
Bhabha‚Äôs The Orientalist conveys ideas of exoticism, difference, and otherness. Equally primitive and futuristic, Bhabha‚Äôs figure theatrically poses as an ominous king or deity. Cast in bronze, it sits as an imposing relic from a fictional history, a regal air emanating from its polished geometric armour, molten death mask, and ethereal chicken wire veil. Humanised through exaggerated hands and feet and sympathetic cartoon styling, its powers waver between the comically surreal and portentously intimidating, drawing narrative suggestion from the loaded clich√©s of late night science fiction and horror movies.


Huma Bhabha has a trippy watercolor in the engaging "Exquisite Corpse" exhibition at the Mitchell Algus Gallery, but its resemblance to the work of Wangechi Mutu is a minus. Ms. Bhabha is much more distinctive in sculpture, as proven by her third solo show at ATM. The three works here move effortlessly between architecture and figurative forms, ancient and modern. Their materials are cheap and practical ‚Äî mostly air-dried clay, found wood laths and pale blue plastic foam ‚Äî but always subtly contrasted.

An untitled work evokes a blind, desiccated sphinx while summoning modernism and its trash. Its blazing white freeform face (enamel on air-dried clay) could be International Gehry; its snakelike body is a rusted exhaust pipe. "Museum Without Walls" might be an architectural model of a colossal clay head retrofitted with glass-walled galleries. In both these pieces, blue foam functions as filler, like the rubble of previous monuments inside surviving ones. "Sleeper" is a Frankensteinian idol of approximately life size, made from wood and clay, whose hollow chest cavity may be a dwelling.

Given their apparent funkiness, it may seem odd to call Ms. Bhabha's sculptures perfect, but with their restraint, careful shifts in scale and clarity of structure, they come close. And ATM's tiny space, not much larger than a tomb or a pyramid's passage way, is the perfect setting.


An intriguing presence in group shows for several years, Huma Bhabha makes her New York solo debut here with three sculptures and a photograph. "Waiting for a Friend" in the front gallery is a composite figure. The bottom section, of wax and plaster over wire, suggests the swelling thighs and tapering legs of a paleolithic goddess. From it rises a vertical wooden beam, like an unyielding spine, surmounted by a head. Bloody-looking little lumps resembling internal organs appear where spine and thighs meet, adding a touch of visceral mystery to what might otherwise be a mind-versus-body abstraction.

A second figure in the back gallery is made up of two detached, club-shaped legs. Cartoonish in a Philip Guston way and standing on a small Oriental rug, they lean together as if locked in a kiss. The piece, titled "Magic Carpet," touches gently on the artist's Pakistani origins, but it attests to her thorough immersion in the self-conscious abjection of contemporary Western art.
The title of the third sculpture, "International Monument," sets up a riff on Tatlin's heaven-pointing tower commemorating the Russian Revolution, though Ms. Bhabha's utopian emblem takes the more inviting form of a big open hand made of ordinary white plastic foam and dark-brown putty, with an animal bone for a base.

The show's single photograph is of a sculpture-in-progress that Ms. Bhabha never completed. In the picture, it looks a bit like a Giacometti coming to life on an operating table, but not like any recent art I can think of. The same is true of Ms. Bhabha's work as a whole, which is one of the reasons I like it.