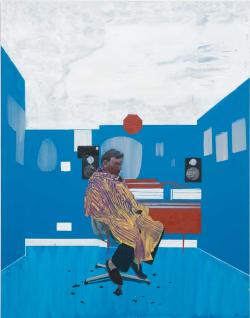 Hurvin Anderson’s paintings flirt between abstraction and figuration, their tranquil scenes merging unstable ideas of memory, conjoined histories, and cross-culturalism. Peter’s Sitter’s 3 imagines a home barbershop, a cottage industry taken up by many newly arrived Caribbean immigrants in the 1950s. Rendered in a reduced palette of blue, white, and red, the scene conveys the experience of freshly acquired British identity, its aspirations and hard realities. The brilliant tones and translucent veneers of the floor and ceiling hark to the open expanse of tropical seaside, while the opaque geometric walls and modest furnishings create a rigidly grounded environment, conveying a sense of disorientation and displacement. 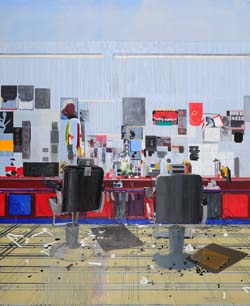 In Anderson’s Afrosheen a barbershop dissembles into a weight-defying field of shapes, textures, and colours, its homey clutter, so intimately familiar, is made surreal and dream-like. Executed in large scale, Anderson’s canvas retains an innocent domestic charm while asserting a commanding and sophisticated engagement with abstraction. Bold red and blue blocks defy spatial perspective, taking centre stage against muted tones layered in gossamer stripes, slate-like squares, and sensitive fluid brushwork. Set under an expanse of airy sky, the scene’s construction belies nostalgic illusion as dabbed clippings and papers appear impossibly suspended over the disappearing floor. 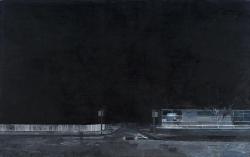 150 x 239 cm
Executed in swarthy blacks, greys and blues, Andersonâ€™s Untitled (Black Street) depicts a night scene with an almost palpable tension. Beneath the vast velvety sky, the minutiae of the street are mapped out with suggestive ambience, as brickwork is chiselled in metered squares, trees loom in tangled gestures, plate glass windows span with opaque sheen, all reflected in the oil-slick brushwork of wet asphalt. Through these limited tones, Anderson captures this place as a series of senses rather than a visual description, his monochromatic scene conveying the cool damp stillness and deadened quiet of early hour suburbia. 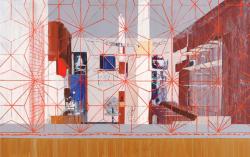 165.1 x 256.5 cm
Transforming the familiar contours of a street front store into a deceptively illusory space, Anderson’s Untitled (Welcome Series) both challenges perspective and bars its indulgence. Drafted from a rustic palette of warm earthy hues and cool whites and greys, the walls, ceiling, and cabinets advance and recede in a disorientating labyrinth; their shifting planes expressionistically rendered as fields of layered texture, become insolvent grounds for graffiti-like sketches and texts, loosely suggesting posters and furnishings. The foreground, cut through with the bright orange star patterns of a security grill, affirms the flatness of the picture plane while situating the viewer firmly on the outside of this scene, a self-conscious voyeur or intruder. 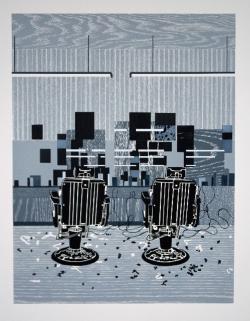 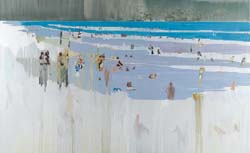 In his work Anderson draws from his heritage as second generation Jamaican-British; the subjects of his paintings are developed from both of these cultures, overlapping his parents’ generation’s experiences with his own. This sense of something familiar yet detached is conveyed through his canvases in their dislocated sense of place and hazy interpretation of detail. Anderson works from photographs rather than actual memory, a process which further enhances his aesthetic of distance. Untitled (Beach Scene) pictures an exotic paradise as melting and degraded, a shadowy and sorrowful landscape where the only concrete certainty is the brilliant blue shape of the horizon.

Hurvin Anderson's meditative suite of paintings, 'Peter's Series' (2007-09), teleports the viewer back to a poorly remembered 1950s Britain. Here, in the intimate surrounds of a sparse blue-hued attic room, newly arrived Caribbean immigrants too poor to rent commercial property have set up a barbershop in their own home. (A common practice among first-wave Afro-Caribbeans, according to Anderson.) The sketchiness of these renderings exudes existential uncertainty: walls, chairs and mirrors seem to melt continuously into the abstraction of anemic winter light. It's a vision of an awkwardly accommodated immigrant culture. Yet, if there's a sense of alienation here, it's also because Anderson's memories are not the vivid ones of a first generation migrant; born to Jamaican parents in Birmingham, England, Anderson follows what Paul Gilroy once called 'routes' (rather than 'roots') culture - a mapping of the paths that weave identity.

Each painting is rendered as a basic tricolour flag: earthy red carpet; blue walls; white ceiling. Mentally subtract the furnishings, and they become northern European seascapes, washed in the gentle tones of Peter Lanyon's St. Ives; mentally rebuild the walls, and you have the drab moodiness of Ivon Hitchen's London Group. Anderson achieves these retro-eggshell hues using a two-layer technique, a haze of white obscuring a base structure of vibrant geometrical form. 'Peter's Series' was made over a three-year period and it forms a record of Anderson's attempts to negotiate between abstraction and figuration. From the near-featurelessness of blue-and-white walls in Peter's III (2007), Anderson has slowly populated his images with furniture. In Peter's Sitters III (2009), in which a customer is depicted hunched in the barber's chair, Anderson achieves full figuration. The client's hair, however, lies scattered on the ground, melting into the painterly carpet as if the this fragile world is about to rebound back into hazy abstraction once more.