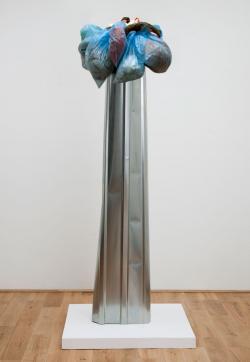 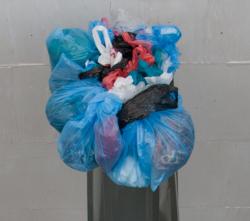 At over 2 metres high, Irina Korina’s Capital (2012), a column-like ‘ruin’ composed of what looks like refuse material, stands as an ironic monument to contemporary culture. The sculpture is made up of ordinary thin plastic bags filled with discarded, donation clothing, tied up and hung flaccidly from the centre of a banged up corrugated metal pillar. It has been designed with a child-like imagination and simplicity – dumpsite art, made out of a top-heavy consumerism fallen by the wayside.

The work’s title seems just as uncomplicated and direct; it’s hard to ignore the obvious play it makes between the central Marxist work critiquing capitalism as an economic system and the term for the top element (Ionian, Doric, etc) of a column in classical architecture, here made out of waste. Capitalism, the sculpture seems to be suggesting, is no more than this: the redistribution of excess. Knowing the context in which Korina works, another meaning of ‘capital’ appears perhaps even more urgent – the general condition of post-Soviet, post-socialist utopian disarray in the city centres of Russia today.

Korina trained as a theatre designer and is known for creating enveloping room installations out of disposable, ordinary materials common to every Russian – a little like Ilya Kabakov’s Soviet interiors, but with a heavier dose of whimsy and kitsch. Previously, she’s used familiar cheap floral fabric, discarded furniture and magazines to create an unfamiliar materiality verging on the absurd, and to confront us with objects and spaces conjuring memories of a previous time. Behind its comical makeshift appearance, Capital stands as a totem to the everyday, leaving us to wonder the meaning of this traditional object reincarnated by Korina.