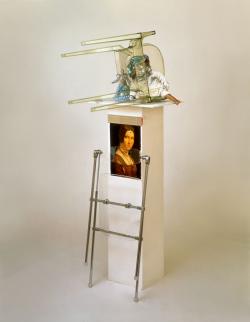 194 x 60 x 100 cm
Her practice is mostly three-dimensional but it also embraces photography, video, film and collage, the latter finding its way into her sculptures as well as wall-based works, as part of her investigation of the way we create and read images and objects. 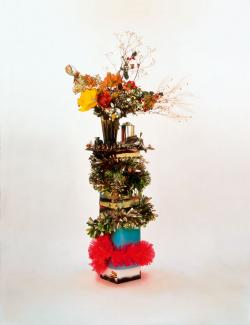 260 x 115 x 130 cm
The column for Isa Genzken is a recurring motif: its linear purity becomes a critical field on which she explores the relations between art, architecture, design, and social experience. In her most recent work, Genzken augments her usually svelte and sophisticated formalism to create assemblages of maximum overload. Bouquet explodes as unwieldy still-life: its plinth base defiled with spray paint, adorned with garlands, topped with a menagerie of cowboys and Indians warring under an ornamental flower arrangement. Posed as a beautiful and grotesque requiem, GenzkenŌĆÖs sculpture references a shattered utopia, framing modernist architectural form as monument of hope and mourning. 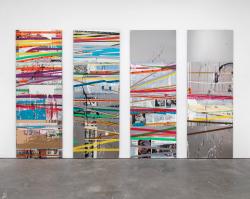 280 x 100 cm each panel (Wall Installation of Four Parts)
In Kinder Filmen (2005) mirrored panels, covered in a chaotic collage of adhesive tape, magazine and book pages, lacquer and spray paint, create an illusion of space, drawing attention to the power of art to subvert our preconceptions. They are suggestive of architectural fa├¦ades and the information overload of urban experience. 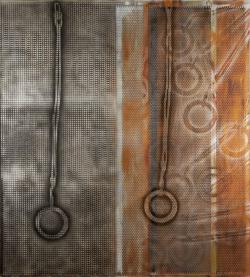 206 x 185 cm
GenzkenŌĆÖs MLR painting series (1992), which the artist has said references the work of the nineteenth-century artist Hilda of Klimt, depicts gymnastŌĆÖs rings frozen moments after their release in mid-air. The images invite the viewer to ponder the symbolic, allegorical act of letting go. 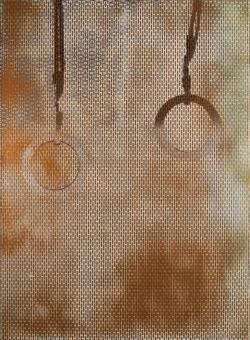 126 x 91.5cm
The oversized fake leaves and giant wine glass dominate Urlaub (2004), inviting a surrealist-tinged, free-associative interpretation. Bouquet (2004) is a comically uptight version of a beautiful, excessive still life as well as a memorial to modernist form. The combine plinth of Mutter Mit Kind (2004) creates an almost sacred altar-like space, bringing together religious and minimalist symbols. Geschwister and Untitled (both 2004) juxtapose found objects into, respectively, a recognisable shape and a non-utilitarian re-purposing to provoke questions around given material meaning. Built around traditional notions of narrative and form, these works suggest a crudeness and frailty behind what has been human-made. 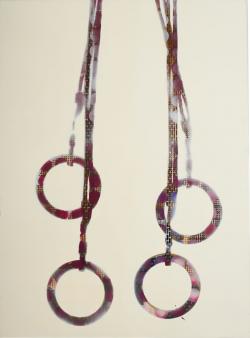 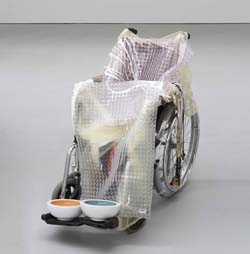 88.9 x 63.5 x 105.4 cm
It is for these kinds of assemblages exploring the tension between open and precise meaning that Genzken is best known. As she says, ŌĆśThere is nothing worse in art than, ŌĆ£you see it and you know itŌĆØŌĆ” ThatŌĆÖs a certainty I donŌĆÖt like.ŌĆÖ 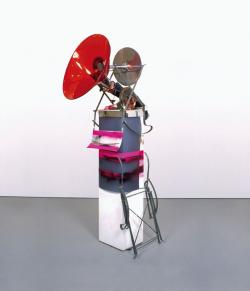 artfacts.net
Since the mid seventies, Isa Genzken (b. 1948) has been making a name for herself with an oeuvre including sculpture, photography, film, video, works on paper and canvas, collages and books.

Isa Genzken
Isa Genzkenby Astrid Wege, Sara Ogger
The characterization of Isa Genzken as a traditional sculptor, along with the usual remarks concerning the heterogeneity of her method and the surprising breaks between her various bodies of work, belong firmly to the topoi of her reception.

cmoa.org
Isa Genzken's sculpture is concerned with what surrounds us and shapes our everyday existence, from design, advertising, and the media to her most enduring subject, architecture and the urban environment.

findarticles.com
Isa Genzken - Zurich - Empire/Vampire, Who Kills Death
When Isa Genzken concluded work on her roughly six-year series of concrete sculptures in 1992, her turn to glass and mirrors might have signaled greater rationalization of her practice. The heavy slablike structures mounted on metal stands, which bad defined much of her work in the late '80s, were unruly, their pockmarked walls often suggesting buildings on the verge of collapse. The hard-edged, smooth surfaces of glass implied more stable forms, a cleaning up of her act.

findarticles.com
Isa Genzken at Marian Goodman - New York, New York by Dena Shottenkirk
German conceptual artist Isa Genzken's recent show at Marian Goodman was a kind of mini-retrospective that covered the years between 1983 and the present. The pieces ranged from large photographs of human ears to small semi-abstract plaster sculptures, from architectural sculptures to enamel paintings on canvas; altogether, the show stressed both the variety of her work and its conceptual coherence.