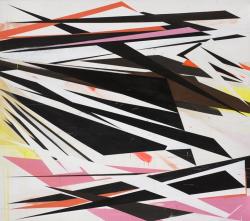 Jaime Gili’s paintings combine the austerity of geometric design with the confidence and authenticity of painterly gesture. Presented in a cluster, his paintings are often not hung, but leant against the wall, creating a temporal architecture that suggests the transience and development of urban space. Executed in vibrant colours, Gili’s large-scale canvases capitalise on their visual power to motivate and allure. Bold splinters of pitch black, copper metallic, or tainted pink pierce through grounds animated with drips, smudges, and impassioned swipes. His paintings are fields of raw, potent energy. 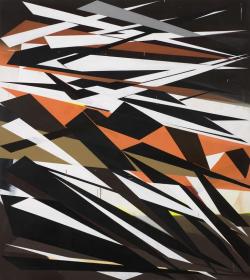 Originally from Venezuela, Gili works from a distinctly South American perspective. Influenced by the sharp geometric angles of 20th century architecture and the sleek elegance of classic automotive detailing, Gili’s paintings disengage the international archetypes of modernism: reflecting instead a localised adaptation of style, where design and its social implications have been internalised and customised to represent a unique national and political identity and cultural heritage. Citing his country’s rapid oil-rich economic growth and intensive South American visionary developments such as Caracas and Brasilia, Gili’s paintings address this utopian new world optimism and its inherent failure. 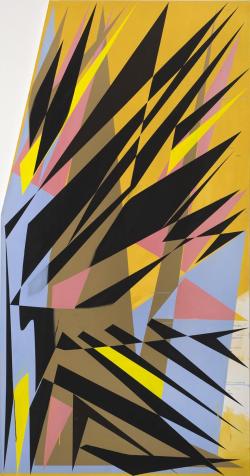 Gili’s canvases are nostalgic for the positivism of the modernist era, where the architectural development of public space and consumer appetite for mechanical goods aroused and affirmed a sense of social buoyancy and community. Gili’s paintings are inspired by the Constructivists’ ideas of bridging art and technology and his shard-like compositions are reminiscent of early 20th century Russian artists such as Ljubov Popova and Mikhail Larionov; his works also pay homage to great South American abstractionists such as Carlos Cruz-Diez, Jesus Rafael Soto and Alejandro Otero.


Jaime Gili was born in Caracas (Venezuela) in 1972. He grew up in a multicultural capital full of vibrant optical art, a concrete city full of optimism. Caracas, in the late seventies, presented its own version of the International modernism movement in art and architecture. Its own take on Utopia, the look of the city being created by artists and architects working together towards a single vision underwritten by a strong oil economy.

By the time Gili began his art studies in Prodise√±o, Caracas in 1988, he was witnessing the willful destruction, dismantling and ruin of some of the city‚Äôs major institutions, its architecturally important buildings and its urban, public art.

Moving to Europe (with his newly claimed EU passport) in 1990, Gili lived and studied in Barcelona, where he concluded his BA in 1995 and a PhD from Universidad de Barcelona on ‚ÄòRepetition in Art‚Äô in 2000. He also studied in Lisbon, Paris and Berlin. Jaime Gili has been based in London since 1996, when he began his studies at the Royal College of Art, graduating in 1998.

Gili is currently engaged in several series of paintings, curatorial projects and photographic works that reference historical and peripheral modern movements. His aim is to resurrect for the present the positive elements which served as a source of creative energy as he grew up. To bring about a new way to think Utopia. An ability to dream and be able to project and execute that dream.

In his latest work Gili depicts this imagined state, using signature forms which recall the best moments of modern abstraction, thereby creating a clash between imagined Utopia and reality.


Located in the heart of the continually developing area around Borough and Union Street in London, the Jerwood Space is a relatively new venue, but an increasingly significant showcase for emerging artists. JAIME GILI (January 15-February 9, 2003), a young Venezuelan artist based in London since his studies at the Royal College of Art, has participated in the first of the Jerwood Artist Platform- an opportunity for a major London solo exhibition at a pivotal point in an artist's career.

For many it would be a mixed blessing, the architecture of the gallery space is unflattering and difficult to say the least, but Gili has risen to the challenge. On the first wall -visible from the entrance of the space - is an arrangement of photographs featuring close-ups of cars entitled Multinational Anthem (2002). This acts as a kind of prelude to the rest of the show, a small self-enclosed installation in which Gili lays out his subject matter almost as literal research.

It encapsulates his concerns within the reality of everyday city life. Here, the relationship between speed, flow, national identity and corporate multinationalism find their focal point in the car, which in turn is viewed as a hybrid of signs. A disinterested and detached demeanour surrounds these photographs that, like a modern day flaneur- or dare one say "train spotter"? log insignias, logos, flags and designs, providing not only the charting of social and geographical networks but also a visual ebb and flow of distance and proximity.