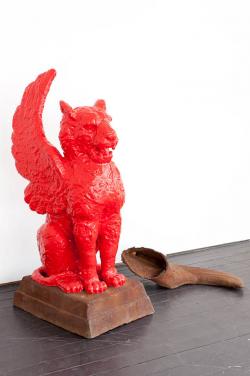 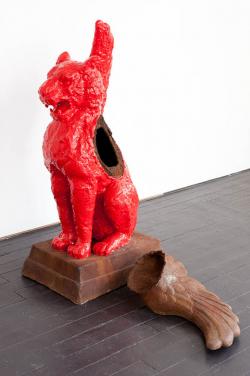 120 x 45 x 59 cm
James Balmforth‚Äôs sculptures are self-defeating monuments, icons of failure. An iron griffin, mythic symbol of earthly majesty, has been coated in bright red plastic; one wing has fallen off, revealing a hollow interior eaten away by rust. A dagger, associated with the power to take another life, has a brass handle but a gallium blade; if stabbed into a body the metal would melt, as gallium does on contact with human skin. The use of gallium introduces another significant theme in Balmforth‚Äôs work: the hidden life of matter, its secret complexities and failures. The griffin ‚Äì entitled Myth Interrupted ‚Äì has a prophylactic red skin, the colour of a postbox or road sign, that both protects and emasculates it. Reduced to a doorstop or garden ornament, the griffin embodies the absence of its mythical origins; a wing gone, it‚Äôs reduced to flying in ever-decreasing circles. 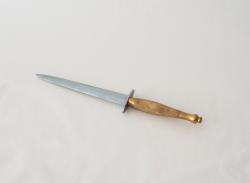 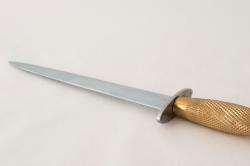 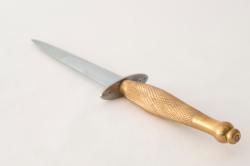 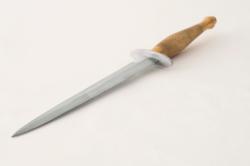 Likewise the dagger (Exchange 3/10), whose skillful construction – the cross-hatched handle with its delicate pommel – belies its inability to function as designed. Defanged and made a thing to be looked at (made art, in other words) the dagger becomes a metaphor of corrupted value, an element in a debased heraldry, while accruing, as if accidentally, uncanny strength and eloquence as art.

Working from a well-stocked tool shed on the 10th floor of a disused South London car park, James Balmforth constructs sculptures that combine mechanical processes with primitive materials, like stone and ash, to suggest the possibility of redemption in acts of decay and destruction. His newest work, The Beauty Yet To Come, is a large rock tumbler (a rotating barrel with an abrasive lining, used to mimic natural forces of erosion and create highly polished gemstones out of rough rocks) that cannot be seen into or ever opened. One can only watch the metal cylinder turning, and listen to the hypnotic sound of a stone being tumbled over and over until it eventually disappears completely. For The Making of Ashes, his 2009 solo show at Hannah Barry Gallery, Balmforth built four machines including a decorative fountain of ash, a sort of manmade volcano that continuously throws burnt materials up out of its spout and down into its basin. The artist is interested in deconstructing existing systems – whether industrial, natural or sculptural – and discovering hidden beauty in otherwise useless objects. Recently Balmforth has installed an epic four-metre monument, the Failed Obelisk, in the forest of the Cass Sculpture Foundation. It is a broken wood-and-mortar monolith, with a pyramid-shaped crown hanging off of it by a thick steel spring, and it mixes the aesthetics of ancient standing stones with slapstick cartoons like Asterisk or Looney Tunes.

James, 29, studied at Chelsea College of Art before becoming a member of the South London-based !WOWOW! artists' collective - as famous for its parties as its art - through which he came to show at 78 Lyndhurst Way. 'It seemed more stable, even though it started as a squat.' One of his works was recently bought by the Cass Sculpture Foundation. He lives in Elephant & Castle and has a studio in Peckham.
Why the collective approach?
As young artists we all needed access to space and that's expensive. We came together by being resourceful.
Describe your work
I make sculpture and video to do with the structure of materials, playing with the idea of forces and structures. I write about each piece as well, as part of it. Video is what I do when something can't be a sculpture, when it exists only in a particular moment in time.
Who'd be in your dream group show?
A group including artists, scientists, spiritual leaders and philosophers.

Balmforth's work aims to distil intricate concepts and specific aspects of human experience in deceptively simple forms by exploiting the evocative and analytic potential of material and symbolic structures. In works that often employ mechanical apparatuses to accentuate the primacy of relations of rudimentary materials such as stone and ash, Balmforth reveals the simplicity inherent in elaborate concepts, and the hidden complexities of seemingly straightforward ideas and structures. This engagement with formal and philosophical tensions reveals complexity and simplicity to be mutually dependent rather than diametrically opposed classifications.
His work also demonstrates an interest in the progress attained through the deconstruction of existing systems and structures, an interest exemplified in Failed Obelisk. By employing futility and failure to subvert static orders, he exposes the redemptive potential in collapse and degradation, promoting an optimistic, rather than fatalistic, worldview.
Balmforth's work has been featured in the Peckham Pavilion at the Venice Biennale (2009); 'Bold Tendencies,' an annual exhibition of outdoor sculpture, at the Hannah Barry Gallery (2007-2009); 'The Centre of the Universe' at the Royal College Art Galleries (2009); 'Event Horizon' at the Royal Academy of Arts (2009); 'Optimism - The Art of Our Time' at the Hannah Barry Gallery (2009); 'The Elimination of Distance' XVIII Jesus Lane, Cambridge (2008) and 'Late at Tate: !WOWOW! and Plastique Fantastique' at Tate Britain (2008). In 2009, Balmforth's works, including Movement Towards Diminishing Object, were featured as part of a solo exhibition entitled 'The Making of Ashes' at the Hannah Barry Gallery in London.