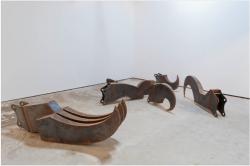 James Capper’s art adopts the techniques, materials and complex problem-solving processes of innovation and engineering to develop the possibilities of sculpture.

His sculptural language evolves along different modular chains termed ‘Divisions’. Each work can be understood as a prototype and therefore each sculpture produces questions that the next work attempts to answer, so that over time each Division produces its own clear iconography and application in action.

Beginning with drawings of all kinds, James Capper makes mobile sculpture to be used in action in a wide range of materials or terrains. The works are sculpture, and sculptural tools in or ready for action.

The works vary in size, from handheld Power Tools in the Carving Division through larger scale works sitting in the Earth-marking or Material Handling Divisions, to Offshore Division works envisaged for use on the water or Aviation Division flying works.

Therefore the work consists of three distinct but interrelated processes – drawing, making sculpture and the capacities and application of the sculpture in action understood and developed through testing, filming and subsequent demonstrations.

To consider his vision in short: traditional frames of sculptural reference are radically revisited, and if real-time technological advances in heavy industry fall behind or advance ahead, James’ own arrangement of ergonomics, hydraulics and aesthetics, allows the works to exist autonomously.

Following his studies at Chelsea College of Art and the Royal College of Art, James Capper’s work has been widely exhibited around the world in museums and not for profit institutions, as well as commercial gallery spaces in London, New York and across Europe. He was the youngest ever artist to be awarded the prestigious Jack Goldhill Prize for Sculpture from the Royal Academy of Arts, London. His work is the subject of critical debate and dialogue about positions in sculpture in the 21st Century and continues to challenge varied audiences everywhere it is shown.

The sculpture Nipper Long Reach represents an elaboration of a sculptural language audiences first had sight of in the Hydraulic Power Tool sculptures James Capper made for the group show Fabricators at Hannah Barry Gallery in 2010, and which he pursued again in a second display of work in this “Division” for the Armory Show in New York (2012). Nipper Long Reach established the founding elements of a substantial family of sculpture defined by its distinct double “jaw” drawn soon after in 2012. The titles and forms of more recent sculptures in this group shown in the exhibition Tools Of The Trade, also at Hannah Barry Gallery (2015), were inspired by the living world of reptiles, insects and birds. However considered in action their hydraulically controlled “teeth” - a term we now happily associate with James’ sculpture - demonstrate cutting and rapid fracturing capacities that seem entirely at the service of an industrial application.

JAMES CAPPER AND THE MACHINES THAT MAKE ART
January 7th 2013, by Nancy Durant, The Times

Capperâ€™s first public survey exhibition is awash with machines built by an artist with an engineer for his hero
Itâ€™s not often that you find yourself admiring an artistâ€™s welding. Painting, yes. Sculpting, often. Welding, not so much. But in James Capperâ€™s studio it is all about the welding. Or the hydraulics. He loves hydraulics.

Machines rule James Capperâ€™s world. In his work, Capper shows his deep fascination for mechanical industry together with a childlike, playful attraction to objects and toys. It is difficult to understand the assumed function of his mysterious devices. In the open air, visitors come across Capperâ€™s sculptures trying to carve their way into the ground or shape the grass, and realise how clumsy the movements of his mechanical monsters are. Inspired by 1960s earthmoving prototype machines, realised by pioneer engineer Robert Gilmour LeTourneau, James Capper sets up an original investigation into the possibilities of mechanical power.
As the artist himself explains: â€˜Ripper Teeth is an ongoing development of the machines which are used in conjunction with my sculpture and installation. The machines are a product of the overall development of the land-marking/mark-making aspect of my work. The Ripper Teeth function as cutting, scoring and shaping tools that will eventually (after tests) be connected to a number of new and different kinds of land-marking machines, like Ripper (2008) and Tread Toe (2010). In Bold Tendencies 5 will be an installation of six different kinds of Ripper Teeth sitting on six light tables. The sculptures will reflect the scale of the machines to which they are fitted and act as a vision of how marks could be made on the earthâ€™s surface. The teeth will sit clumsily on the light tables, highlighting their manufactured but organic curving forms.â€™

The natural flow of the galleryâ€™s interior leads you to the next room, which is home to â€˜Fleetâ€™, by British artist James Capper. This exhibition is comprised of dozens of small sculptures of raw, industrialized machinery. They are explained a â€™three dimensional plans for as-yet-unconstructed machinesâ€™.
They are so simple and do not have a colour or detail to them. As you study these works more closely, your focus is o the machine and its possible function, because itâ€™s not always immediately obvious, not intuitive at first glance. The sculptures were made from all types of building material, from pieces of wood to fabricated metal, to thoughtfully constructed pieces of cement. The smaller sculptures lined a shelf on the wall while larger works lay positioned on the floor.

James Capperâ€™s collection of drawings at Modern Art Oxford are perfect for the busy but intrepid art lover. Site specific work can move mountains and indeed James Capper has designed Ripper Teeth from workshop and concept Drawings, as shown on the walls, to teat open the earth around Rose Hill.

James Capper, Ripper Teeth in Action, is part of Modern Art Oxfordâ€™s Art in Rose Hill commissions programme. Inspired by the aesthetics and actions of large-scale construction machinery, Capper employs a set of â€˜ripper teethâ€™ of his own design to work on large sections of land around Rose Hill, Oxford. In a series on live performances throughout August the artist will attach these custom-built fittings to an excavator vehicle in order to explore their capacity for mark-making. Capperâ€™s activities respond to the regeneration of the neighbourhood, paralleling some of the earth moving techniques already taking place in the area. Both machine aesthetic and mechanical processes are central to Capperâ€™s work, which take as a source of inspiration the numerous experimental and prototype earth moving machines developed by Robert Gilmour Le Tourneau in the 1960â€™s.