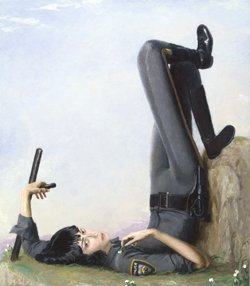 Jansson Stegner’s canvases contrive a humorous blend of romanticised beauty and pop culture dumbness. In paintings such as Sarabande and Grey Sky, Stegner adopts the pastoral hues and elegant compositions of historical painting to portray images of contemporary longing. Borrowing from the vernacular of TV heroicism, Stegner’s paintings of cops transpose the glamorised bravado, violence, and machoism of programmes such as COPS into a quirky fetishism, as his nubile girl-as-boy police officers languish in idyllic settings, rendered like cherubic pin-ups for sensual indulgence. Through his use of cartoon-ish exaggeration, Stegner’s figures become both surreal and idealised: all gangly limbs and gesticular expressions their vulnerability is countered by their moral ambivalence. Throughout Stegner’s paintings is a sense of punk-ish aggression, where the authority is questioned, subverted, and manipulated both through his subject matter and ‘slack’ style of painting, which contrive a taboo intimacy from generic emblems of power. 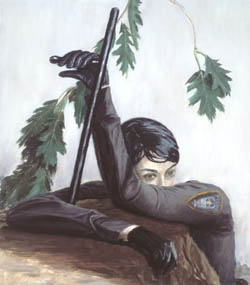 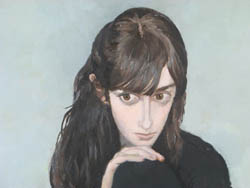 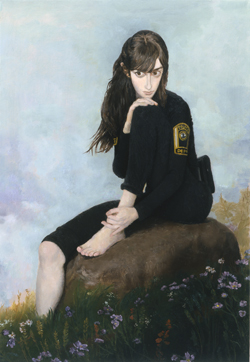 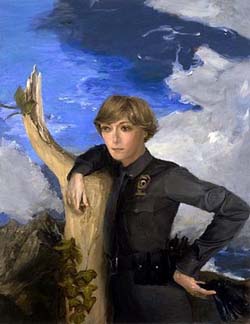 mikeweissgallery.com - Dig me No Grave
Mike Weiss Gallery is pleased to announce Jansson Stegnerâ€™s first solo exhibition. Stegnerâ€™s fantastic and implausible narratives unfold in vast and lush landscapes that allude to 18th and 19th century Romantic and Neo- Classical history painting. His inventive and enigmatic scenes subvert our sense of reality and play with our expectations of right and wrong. By pitting boyish highway patrolmen against nondescript, khaki-clad youth, Stegner blurs the lines between protagonist and antagonist and challenges the viewerâ€™s preconceptions of heroism, violence and authority. The overt sex and violence references the battle scenes and bacchanalia taken from art history, as well as more contemporary influences, such as the art of Frank Franzetta and TV shows like CHiPs and C.O.P.S.

mikeweissgallery.com
"Painting is an indulgence in the things that fascinate or move me: love, romance, power and violence. I am drawn to images that attract or repulse. For me, the most interesting paintings do both." -Jansson Stegner.

findarticles.com - Jansson Stegner at Mike Weiss
Art in America, by Sarah Valdez
Sex, violence and strange idylls are the subjects of Jansson Stegner's weirdly compelling solo debut, "Dig Me No Grave." The show is titled after his 2004 painting of a motorcycle crash on rolling hills through which bodies fly through the air. As in many of his works, Stegner seems to enjoy depicting attenuated limbs flailing about, and often uses them as compositional devices. Drawing inspiration from such culturally diverse sources as Romantic and Neo-Classical history painting and the television shows "CHiPs" and "COPS," Stegner portrays senseless conflicts, sickening orgies and bizarre portraits of lone individuals, either posing or in the midst of nervous breakdowns--for reasons that can't always be deduced from what's seen.