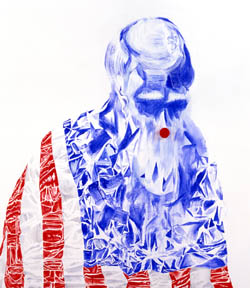 acrylic and clown nose on canvas

144.8 x 127 cm
Using painting as a springboard for fiction and critique, Jason Fox’s canvases picture a host of invented characters: each comically monstrous in their distortion of social stereotype. Describing his work as “portraits of being stuck inside a big, powerful, stupid, funny, crazy, violent, ignorant, dangerous head looking into a mirror”, Fox draws equally from art history, cartooning, and cult films, to provoke an edgy subversion of popular culture. Bringing into question issues of race, gender, class, and politics, Fox’s satirical commentary is underscored by a masterful command of quotation and technique. In Star Star, Fox shrouds his withered oracle with an American flag, creating a totem of protest and humour; a scathing joke underscored by the addition of a red clown nose attached to the painting’s surface. Quote taken from: http://www.featureinc.com/artists_bios/foxqa.html

Alexandre Pollazzon Ltd is pleased to present a solo exhibition of new and recent paintings by American artist, Jason Fox.
The Flash Art article â€˜U.S Pain. New American Figurationâ€™* written over ten years ago by Francesco Bonami described a generation of American artists that included Jim Shaw, Raymond Pettibon, Sue Williams and Jason Fox, all commonly linked by their satirical views on art and society and their â€˜figuration and language as a cure to all its creative and existential, pathological ills.â€™
Hailing from this group that adopted the accessible vocabulary of pop and narrative art, Foxâ€™s works bridge classical painting, cubism and cartoons, synthesising the shorthand of linear caricature.
Often the central focus for Foxâ€™s paintings are hybrid creations of fictionalised misfits, heroes or anti-heroes and the works can be referenced to art visionaries such as Goya and Picasso and to genres such as science fiction, blax-ploitation films and video game iconography.
Through Foxâ€™s technique of loose brushwork, the use of a restricted palette and mimicry of a cartoon drawing style, a sense of black humour pervades over the abstract beauty and grotesque symbolism that is created.

How about your palette?
It's part of an experiment to optically splice different visual species into a new organism, which may seem misshapen at first (like Mary Shelley's Frankenstein), but most importantly, it's alive.

Do you set out to make paintings which simultaneously read ancient and futuristic?

I've always been influenced by Robert Smithson's use of the ancient and the futuristic, as a catalyst for ideas. Recently I've found the subject even more compelling (and necessary), as our culture seems to become more and more compressed into a fictional present.

To me blurring creates the circumstances for change and the idea of change is a vital organ. I remember years ago reading an interview with George Harrison, and he was asked: 'What does the world need most?' and he answered with something about human consciousness needing to be raised through Krishna...and I thought at the time, what a stupid hippy answer...and now I think of course!

They're portraits of being stuck inside a big, powerful, stupid, funny, crazy, violent, ignorant, dangerous head looking into a mirror.

What have been some of the benefits to working slowly?
Escape from Puritanical chains of neurotic productivity and more time for sleep.