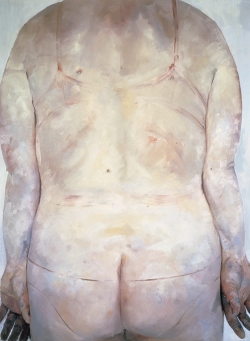 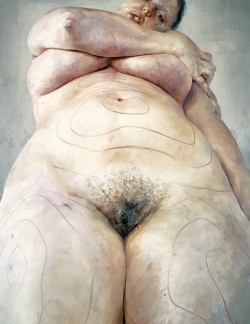 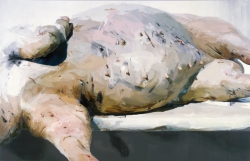 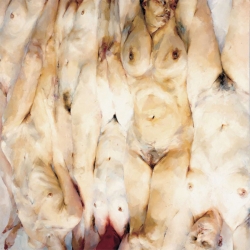 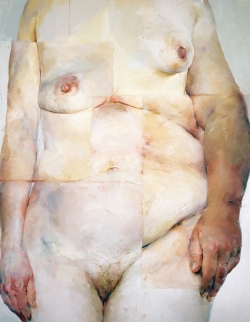 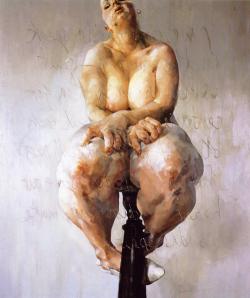 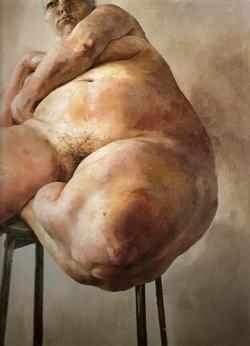 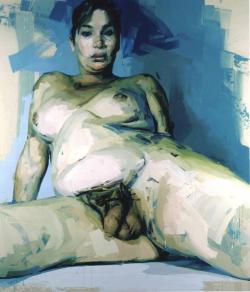 336 x 290 cm
Jenny Saville: With the transvestite I was searching for a body that was between genders. I had explored that idea a little in Matrix. The idea of floating gender that is not fixed. The transvestite I worked with has a natural penis and false silicone breasts. Thirty or forty years ago this body couldn‚Äôt have existed and I was looking for a kind of contemporary architecture of the body. I wanted to paint a visual passage through gender ‚Äì a sort of gender landscape. To scale from the penis, across a stomach to the breasts, and finally the head. I tried to make the lips and eyes be very seductive and use directional mark-making to move your eye around the flesh.

Simon Schama: So you really do manipulate what‚Äôs in front of you through the mark-making. It‚Äôs very striking ‚Äì I‚Äôm looking at a photograph of your transvestite painting Passage and that passage that moves from the penis and balls to the belly is really about the anatomy of paint as it constructs the body.

Jenny Saville: I have to really work at the tension between getting the paint to have the sensory quality that I want and be constructive in terms of building the form of a stomach, for example, or creating the inner crevice of a thigh. The more I do it, the more the space between abstraction and figuration becomes interesting. I want a painting realism. I try to consider the pace of a painting, of active and quiet areas. Listening to music helps a lot, especially music where there‚Äôs a hard sound and then soft breathable passages. In my earlier work my marks were less varied. I think of each mark or area as having the possibility of carrying a sensation. (Extract from ‚ÄòInterview with Jenny Saville by Simon Schama) 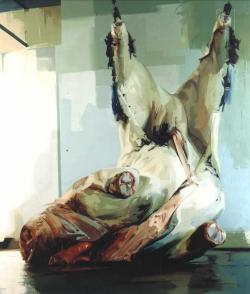 Jenny Saville’s monumental paintings wallow in the glory of expansiveness. Jenny Saville is a real painter’s painter. She constructs painting with the weighty heft of sculpture. Her exaggerated nudes point up, with an agonizing frankness, the disparity between the way women are perceived and the way that they feel about their bodies. One of the most striking aspects of Jenny Saville’s work is the sheer physicality of it. Jenny Saville paints skin with all the subtlety of a Swedish massage; violent, painful, bruising, bone crunching.

Jenny Saville's paintings are known for the mountains of flesh they reveal, but it is the neuroses bursting through that interest her, she tells The Guardian‚Äôs Suzie Mackenzie.

In August 2003, on her way back to London from a holiday in Sicily, the artist Jenny Saville stopped off in the island's capital, Palermo, for what she intended to be a single day's sightseeing, having never visited the city before. It must have been like entering not so much a new world, as her own world - the world she has carried around in her head since she was a child and which she has forged into those monumental flesh paintings, her unidealised naked bodies, which erupt and leak at us, and force us into new habits of perception. What is this thing, the body, her paintings ask, when it is stripped bare, denuded of personality and context, this thing that seems so much a part of us, and which we try so hard to look after and yet which betrays us, decays from within, and which, when it leaves us, takes us with it?

Completing her studies at the Glasgow School of Art in 1992, Jenny Saville's graduation was a huge success; every painting was sold - one to British mega-collector Charles Saatchi. By the time she was preparing to return to college for her post-graduate studies, Saatchi had tracked down the other works that had already been sold and bought them too. He then offered the artist an 18-month contract, supporting her while she created new work to be exhibited in the Saatchi Gallery in London. It was an explosive start to a young artist's career.

The images that had catapulted Saville into the international artworld were born from a fusion of her addictive love of painting and strong interest in feminist theory. Yet Saville's chosen methods - large oil paintings of female nudes - were oddly outmoded: implicitly associated with a male-dominated art history. That she has managed to use such means to put forward a consistent, credible statement as a contemporary female artist is testament to the singularity of her vision.