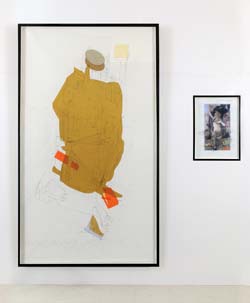 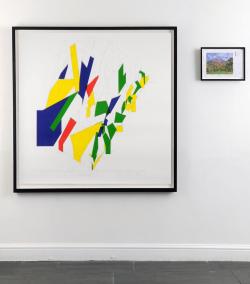 
Jenny Wiener‚Äôs work is subtle, analytical and almost perverse. Almost because it has a wonderful reasoning all of its own which stretches the logic of measurement to the point where the rigorous patterns of everyday coherence begin to dissolve into the metaphysics of improbability. There is a dash of whimsy, a soupcon of artistry and a great deal of intelligence that go into this mix of the mythical, the numerical and the perceptual. This is postmodern art in the best sense of the word; it is art about the possibilities of art and the probability of perception being confronted by the inadequacies of tradition. Let those who look for reassurance look the other way.

Claude Levi-Strauss once said ‚ÄėThe wise man doesn't give the right answers, he poses the right questions.‚ÄĚ and this particularly applies to Ms Wiener‚Äôs work. Examining the ways in which measurement and perception frame the viewer‚Äôs approach to the world , and structure the ways in which art-works function, is central to her ‚Äėaesthetics of curiosity‚Äô. Her work is concerned with the skeleton of the way that ideas function and with the internal phenomenology of artistic perspective. Foucault talked about the ‚Äėorder of things‚Äô and Weiner Is really talking about the ‚Äėperceptual order of things‚Äô wherein historical and mythical structures within an art-work are subjected to her precise and particular mode of deconstruction. Where art-works once sought to present a ‚Äėway of seeing‚Äô, to place the viewer in a position of acquiescence, Weiner seeks to disrupt the viewer by measuring all of the possibilities of viewpoints. It is an artistic mode of practice that turns measurement and perspective into the question rather than the answer.

Based in an understanding of the tyranny of mathematics, the iron hand of the digital on contemporary culture, Weiner looks into the mythical and the artistic to discover ways to subvert the everyday patterns of self-regulation. In today‚Äôs business culture everything is measured, checked and weighed; and then communicated to the planners who organise the modes of cultural organisation that are appropriate for artistic regeneration. Weiner‚Äôs revolutionary claim is to ask ‚Äėwho measures the measurers?‚Äô From the number of digits in a pin to the number of minutes left on a parking mater mathematical patterns measure out the life of everyone and everything in a postmodern digitalized culture Weiner‚Äôs other question is precisely ‚Äėwhat do all the numbers mean?‚Äô.

Weiner‚Äôs other interest is in the historical structures of myths, of attempting to transform structures from within history and to remake perspectives. This is an historical phenomenology of optics akin to what Benjamin was referring to in his work on the place of the art object in the era of mechanical reproduction. Analysing mythic structure in the Wizard of Oz is something that the thinker of allegoric mysteries would have clearly understood, and would have endorsed. He once said ‚ÄúGenuine polemics approach a book as lovingly as a cannibal spices a baby.‚ÄĚ If we substitute the words ‚Äėart-work‚Äô for book then you have a description of Weiner‚Äôs approach.

Starting then with maths, and moving to the structures of perception, Weiner poses questions about questions, and critiques of visual thinking. That is what is so original in her work and so quixotically unique in its clarity and aesthetic purpose. She is concerned with the internal dynamics of the relationship between space, myth, time and the visual and the possibility of re-engineered viewpoints.

This could be summarised as examining the structural dimensions of the representation of possibility in an ever changing world of images; looking for the ‚Äėpoint-of-view‚Äô in a disengaged world of endless artistic reproducibility. Or more precisely a mode of thinking about the structure and function of mythological space in a contemporary digital world.

Her work makes you look at the way that you look and think about the way you see.