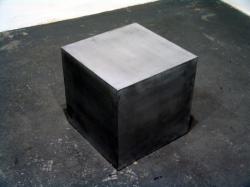 50 x 50 x 50cm
Imbuing technology with an element of surprise and humour, Jeppe HeinŌĆÖs interactive works playfully remind viewers of their vital part in activating artŌĆÖs communicative potential. At first glance HeinŌĆÖs sculptures appear to be uncomplicated, formally simple affairs possibly nodding to 1970s conceptual art and minimalism, but something happens as they are approached: they react to human presence.

Shaking Cube (2004), an aluminium box placed directly on the floor, starts to vibrate when a visitor goes near it, stopping after a few seconds only to begin trembling again if the invisible field of motion sensors around it is entered again. We know itŌĆÖs not alive, but it makes us take another look. Its sudden frantic movement and noise have a somewhat slapstick quality ŌĆō think wind-up chattering teeth ŌĆō but its animation is also disquieting, automaton-like, as if expressing alarm, a warning about something we cannot understand. 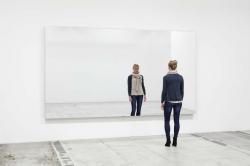 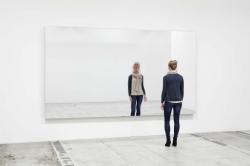 200 x 356 cm
Something similar happens when visitors get close to Mirror Wall (2010). What at first appears to be a large but straightforward mirror begins to move slightly when approached. Viewing oneŌĆÖs vibrating reflection in it and the accompanying distorted backdrop of the gallery space creates a sense of dizziness and a strange feeling of separation from the familiar. It prompts us instinctively to re-calibrate our spatial awareness and our relationship to what we see and where we are.

HeinŌĆÖs experiential, perceptual magic tricks are his vehicle for raising engagement between art and its audience. He makes work that can only be experienced through participation, expanding our notion of what art is or could be. ŌĆśFor me, the concept of sculpture is closely linked with communicationŌĆ” By challenging the physical attention of the viewer, an active dialogue between artwork, surrounding and other visitors is established that lends the sculpture a social quality.ŌĆÖ

Kopenhagen met Jeppe Hein to have a chat about his exhibition at Galleri Nicolai Wallner. His work is minimalist, the ideas stripped of unnecessary noise and presented in their purest form, invitingly clear for the viewer.
YouŌĆÖve been looking forward to having a show here in Copenhagen at Galleri Nikolai Wallner.
Yes ŌĆō itŌĆÖs always been one of my big goals to exhibit at Wallner, ever since he started his own gallery. Last year, when I had an exhibition at Galleri Johann K├Čnig in Berlin, Johan arranged a meeting for me with Nicolai, who was down there to see the show.
IŌĆÖve been wanting to show the home public what IŌĆÖve been up to, but IŌĆÖve only ever exhibited abroad. Now people can come in and see my work in person, instead of seeing and hearing about in via other media.

YouŌĆÖve created a show that involves the entire gallery; what have you created, and why?
It was a long process, figuring out exactly what I wanted to do with these rooms, and I went through many ideas. This is the first time IŌĆÖve chosen to show the actual process.

Along the Project RoomŌĆÖs one wall IŌĆÖve hung 44 sketches of all my ideas and thoughts about what I could create in the space. The other wall shows what I chose to create in the end. With this exhibition IŌĆÖve been thinking about the galleryŌĆÖs situation, and how it presents and represents art. How artists can go into an exhibition space and use it to stage their art. My job has been to find out how I, with the room as frame, can make my work function best, while maintaining a relationship with the room itself. I chose to take my sketches along because they communicate the reduction process that led to the exhibition.

Jeppe HeinŌĆÖs works address us individually; though, importantly, we might not have asked them to. Hein delights in apparently serendipitous events, suspending common sense laws of cause and effect and conjuring up scenarios in which, in direct response to our presence, seemingly sentient behaviour is coaxed from inanimate things.

In some of his pieces he articulates a dialogue between the work itself, the person encountering it and the gallery space in which it is sited ŌĆō though this is a conversation for which one is wholly unprepared. Works of this kind imply a wry relationship both to the Minimalist sculpture of the 1960s and to those forms of institutional critique that sought to question the authority of the museum or gallery space. Yet HeinŌĆÖs practice does not really fit either tradition ŌĆō the mode of address and playful tone is at odds with, for example, phenomenological interpretations of Minimalist sculpture, in which the viewer participated in the work but as a relatively abstract presence. For Hein that viewer becomes a very literal participant who, consciously or otherwise, acts as a trigger for the work.