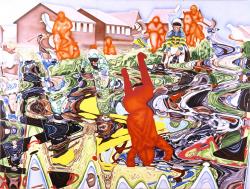 oil and acrylic on panel

Steeplechase depicts a popular, violent sporting activity simultaneously characterizing the best and worst of American culture. A deliberate choice on the part of the artist, the subject matter was chosen precisely because of its unlikeliness, as a means to distance himself from the academic training he had received at art school. Meyerson manipulates images culled from a range of media to create heavily congested scenes of intense richness, in part an aesthetic response to the flat, arid landscape of rural Minnesota in which he was raised. Steeplechase is typical of his interest in kinetic imagery; objects or people in motion, scrambled by concussive force and the artist’s psychology into parabolic waves of hallucinatory colour. 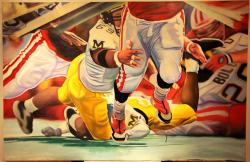 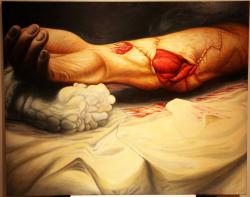 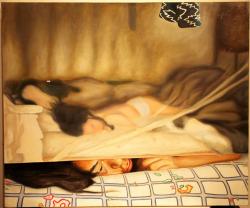 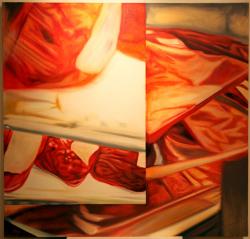 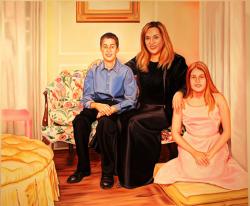 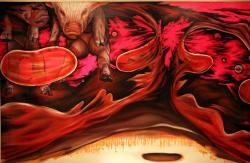 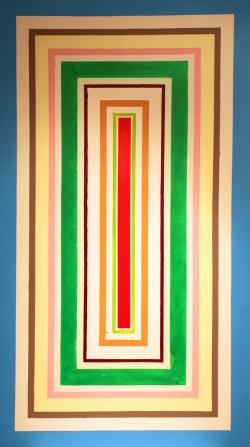 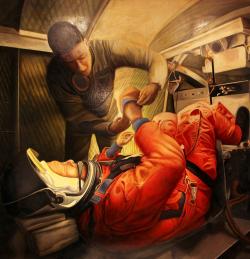 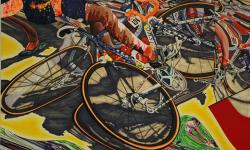 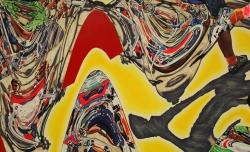 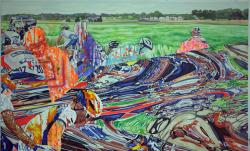 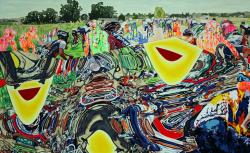 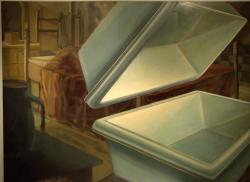 In Meyerson’s installation, images from movies, video games, television news and sports channels, advertisements, computer graphics, books, and magazines collide in a chaotic and bewildering narrative filtered through the artist’s individual psychology. A self-confessed visual junkie, he invites the viewer to take a dizzying rollercoaster ride through a series of personal and impersonal experiences. The individual canvases, whose precise configuration is intended to be largely spontaneous, form temporary associations, blurring the line between conscious and unconscious. Painting itself is intended to be the primary experience, both for the viewer, who struggles to make sense of a barrage of vividly distorted visual imagery, and the artist, who experiments with numerous different techniques to apply paint to his canvases.

"MORE THAN YOU WANT, LESS THAN YOU NEED"


LFL Gallery is pleased to present the solo debut of Jin Meyerson, a painter based in Brooklyn. The exhibition, titled "More than you want, less than you need", will run from February 28th to March 27, 2004.
Meyerson's interest in kinetic imagery -- from football players squaring off at the line of scrimmage to ATVs leaping over sand dunes -- is the primary impulse behind his aggressive manipulations of magazine photos. Rather than maintaining an expanding archive of snapshots or retreating into nostalgic scrapbooks and family albums, Meyerson flips through countless periodicals straight off the rack. The results, whether gleaned from Cycle World or Modern Bride, Sports Illustrated or Life Magazine's Year in Pictures, are up to the minute cultural artifacts with one thing in common: motion. The concussive force of two injection-molded helmets colliding or the suspended orbit of a soccer ball before it breaches a wall of players en route to the back of the net, might pique Meyerson's interest at the magazine store, but this is merely the first step in his systematic dismantling and amplification of the image. In Meyerson's unique brand of physics, motion is added to motion to depict, not just greater speed, but a network of clustered frequencies -- both languid and frenetic -- lying dormant within each image. While computer scrambling and randomizing is a means of revealing this hidden swarm logic, Meyerson goes much further in his painterly attacks by eradicating compositional centrality in favor of parabolic waves in blistering fuchsias and emerald greens. The estuaries of color here don't so much lap against their neighbor's shoals with liquid gentleness, as detonate like dispersed shrapnel. - David Hunt.