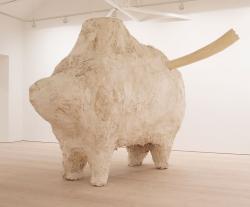 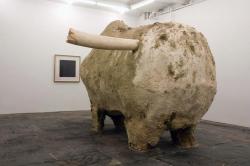 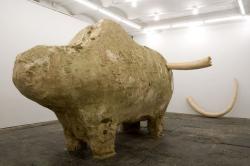 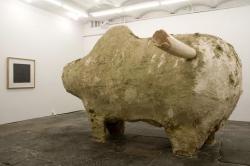 254 x 264 x 396 cm
It‚Äôs impossible to ignore the presence of Joanna Malinowska‚Äôs Boli (2009) an oversized, confounding sculptural ‚Äòelephant in the room‚Äô holding court in the centre of the gallery. The rough animal shape is similar to a traditional object of significance to the Bamana culture in West Mali of the same name, also vaguely bovine but usually much smaller.

Traditional bolis represent the Bamanan cosmos and are held in a special location by village elders. They can be made out of earth, blood, cattle dung, kola nuts and other material related to spiritual ritual. Malinowska‚Äôs hypertrophied version of the talisman is made out of plaster, clay, hay, wood, scraps from Spinoza‚Äôs Ethics, a litre of water from the Bering Strait, and a sweater belonging to Evo Morales, the Bolivian president. Just like with traditional bolis, its materials could be interpreted, but the whole is more than the sum of its parts.

Inspiration for Malinowska‚Äôs sculpture, performance and video-based projects comes from her fascination with anthropology, and her works often playfully suggest her own take on anthropological field work and interpretation. ‚ÄúBefore choosing art, I had considered becoming a cultural anthropologist, but eventually decided that what made me interested in anthropology was not so much the research that aspires to scientific objectivity, but rather the sense of relativity of a cosmic order of one‚Äôs own culture in comparison to other possible systems.‚Äù

Malinowska‚Äôs Boli re-creates the Bamanan original with a new set of materials, and embodies the artist‚Äôs interest in re-imagining the way objects are charged with meaning. ‚ÄúIf asked to find a common denominator in my recent works,‚Äù the young Polish, New York-based artist says, ‚ÄúI would say it is an interest in methodically testing and engaging the invisible, hidden aspects or powers of an object, revitalizing its metaphysical potential, and simply giving it the benefit of the doubt.‚Äù