Acrylic on canvas in seven parts

Using minimalism for its associations with high modernism, as well as for its legacy in the form of Ikea reproducibility, Bradley’s canvases proudly assert their objecthood as well as their ‘easy assemble’ irony. His simplified painterly lexicon brings together associations of mass media: tv test patterns, arcade graphics, and commercial logos, under his own brand of ‘slacker’ aesthetic. Through his retro-futuristic style, Bradley critically pokes fun at the commodification of art while simultaneously addressing the possibilities of contemporary painting. 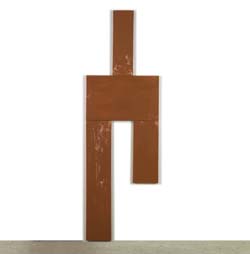 Acrylic on canvas, in four parts

Overall dimensions approximately 233.7 x 73.7cm
Bradley seamlessly merges the disparate traditions of paintingâ€™s history and consumer graphics to develop abstracted â€˜figuresâ€™ which are uncannily archetypal. In Wolf, four brown canvases marred with scatological splatters function as a reductive stand in for the ravenous and beastly. Paring down pictorial representation to its most diminutive form Bradley encapsulates the essence of character and narrative, raising the logo-istic shorthand of information transaction to the eminence of high art appreciation. 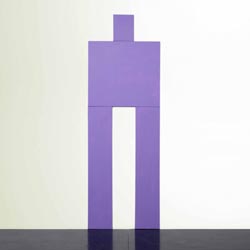 Acrylic on canvas, in four parts

Overall dimensions approximately 268 x 91 cm
In championing the abject, Bradley engages with the problems of painting itself. Each arrangement reveals the processes of theatricality and illusion, creating a sense of narrative and personal gesture through generic attributes of colour, line, shape, and composition. Behind their tongue in cheek parody, Bradleyâ€™s paintings resolve the detachment of hard edged abstraction with an affectionate intimacy; each work commands mediation through its understated integrity. 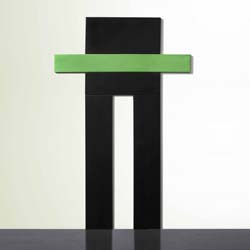 Acrylic on canvas, in five parts 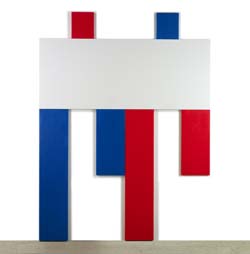 Acrylic on canvas in seven parts

Overall dimensions approximately 267 x 198 cm
Joe Bradleyâ€™s work reconfigures the daunting spectrum of minimalist painting with an endearing sense of humility and pathos. Arranging his canvases in the shapes of absurd and clunky figures, Bradley subverts the subtle grids of Ad Reinhardt and the pantone hued planes of Ellsworth Kelly, infusing traditional formalism with cartoon humour. Through this merger of abstraction and figuration, Bradley embraces equally the non-objective ideals of 70s art and a contemporary humanist approach to high culture.

In art, pretending to be dumber, more juvenile or less rational than you are usually serves an advanced sophistication. It certainly does in the surprisingly sweet and mysterioulsy resonant exhibition by Joe Bradley, a young New York-based painter having his third solo show.

Mr. Bradley's multipanel paintings consist of flimsy, store bought canvases brusquely painted single colors and arranged to create the much simplied images of armless, big-shouldered figures resembling primitive video game characters. Standing almost nine feet, with their legs abutting the floor, these "big stocky guys," as the sculptor Dike Blair calls them in an essay written for the exhibition, seem to have gathered for some kind of tribal ceremony. A sky-blue canvas called "Mirror," lying on the stone floor in the center of the gallery, glows like a reflecting pool; a large, squarish canvas on the wall, painted all brown, evokes the eathe (above from left "Trans," "Mirror" and "Machine Hash"). (That Kurgan is the name of an evil, immortal warrior in the cult movie "Highlander" may or may not be relevant.)

To use a Minimalist voculary for such unabashedly anthropomorphic purposes is somehow comincal. Joel Shapiro's blocky, puppetlike figures are similarly funny. Mr. Bradley's show might be a joke about what the critic Michael Fried saw as the essentlially theatrical nature of Minimalist art. But is also vividly demonstrates how we may experience even the most abstract artworks as amimated by lifelike or supernatural energies. We may not be as sophisticated as we think.

Earlier this year Joe Bradley had a show at CANADA, a gallery in NYC. The show was comprised of a collection of monochrome canvases; some, configured in groups, resembled oversize figures; others, hung individually, looked like they might be send-ups of Minimalist art.

The canvases looked like they'd been painted by an apprentice housepainter and all sagged on thin, store-bought stretchers. The overall effect was one of slipshod pathos. I loved the show and bought a painting.

The painting I went for hook, line and sinker is Fisherman's Friend, which Joe told me was inspired by the signage of a seafood restaurant in Maine. It's comprised of four canvases: two long skinny ones and a blockish one, all yellow, comprise the legs and torso of a body, and a smaller, off-white one, the head. While his design may be aggressively stupid, Joe is a subtle and witty colorist, and he's extremely sensitive to the tactile qualities of paint.

The dull, dirty white canvas of the head looks and feels like some soiled cotton sailor's cap, and it's perfectly sympathetic to the rain-slicker-yellow of the body. The yellow acrylic paint almost covers the texture of the canvas, so it closely approximates the look and feel of rubber-coated fabric. I don't think this kind of canny representation is the point of the painting, but it's certainly a great byproduct.

I asked Joe how these hominoid paintings came about, and he told me that a couple years ago his vertical monochromes started to look like people, so he started giving them titles like 'Larry' and 'Tom'. He felt that making that reference explicit seemed like the obvious next step. My 'friend' stands in my living room between my favorite furniture a Noguchi lamp and a Saarinen womb chair.

They all seem to be in conversation about their respective roles as painting, sculpture, and furniture. They feel like a family, or siblings, and although he's the youngest and a cut-up, he's very much at ease with his iconic brothers. Even though he may be a joker, I never think of Fisherman's Friend as a joke he's way too smart and good looking to be taken lightly. Dike Blair is an artist and writer based in New York City.