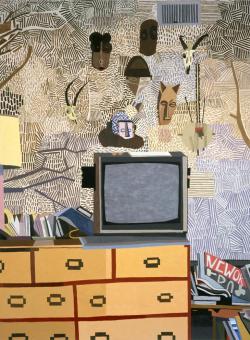 259 x 191 cm
Jonas Wood‚Äôs paintings of contemporary American life blur the boundaries of figuration and abstraction. In Rosy‚Äôs Masks, an interior scene dissembles into a myriad of shapes, colours, and geometric patterns, their quiet formal tension setting the tone for Wood‚Äôs suburban subject matter. Using the domestic as a departure point for escapism, the claustrophobic composition expands into the internal space of daydream, with the muddied tv screen and stylised furnishings set like stage props against a backdrop of hallucinogenic jungly wallpaper. Giving nod to historical precedent, the masks and tabular design evoke connotation to Picasso‚Äôs
primitivism and surrealism. 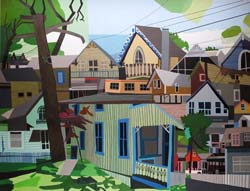 305 x 396 cm
Wood’s painting are influenced by a serious engagement with art history that ranges from cubism to pop art, and are most notable for their reconsideration of the golden era of 20th century American painting, drawing comparison to artists such as Grant Wood, Edward Hopper, and Stuart Davis. Working almost exclusively from life studies, sketches and collaged mock-ups, Wood’s distinctively humble aesthetic creates a disorienting sense of space. Translating the three dimensional world to the flatness of the picture plane with concentrated faithfulness, Untitled (M.V. Landscape)’s off-kilter perspective and vivid interpretation of colour transform small town idyll into a cosmopolitan abstraction with cinematographic ambience. 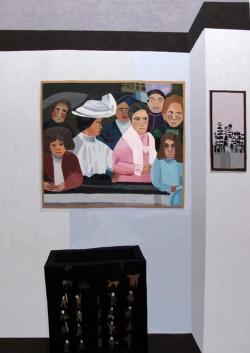 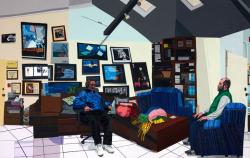 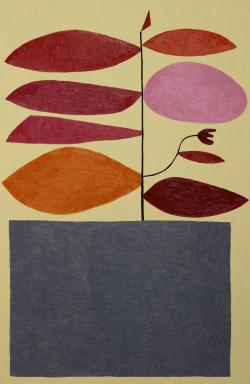 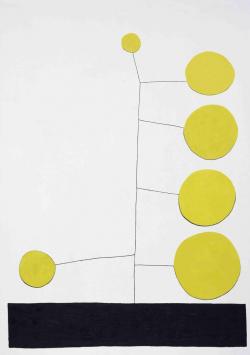 Jonas Wood‚Äôs painting continues to mature impressively, gaining pictorial and psychological weight. More than ever his works negotiate an uneasy truce among the abstract, the representational, the photographic and the just plain weird. They achieve this with a dour yet lavish palette, tactile but implacably workmanlike surfaces and a subtly perturbed sense of space in which seemingly flattened planes and shapes undergo shifts in tone and angle that continually declare their constructed, considered, carefully wrought artifice.
A case in point is ‚ÄúSun Porch‚Äù and the several browns that denote the spindled back of an armchair at its center, although it takes the eyes a while to notice, given the room‚Äôs crowded topography of furniture, embroidered textiles and, overhead, the beamed ceiling.
Mr. Wood paints the artist‚Äôs life that happens to be his own. In its broadest outlines the subject has not changed all that much from, say, Vuillard and Matisse to Alex Katz and David Hockney. In Mr. Wood‚Äôs case it includes the hallway leading to his studio, a stack of birdcages stored in a corner somewhere (occasioning a riotous extravagance of parallel lines) and a large cluster of incised ceramic vessels, suffused in a weirdly palpable gray light, by the artist Shio Kusaka, to whom Mr. Wood is married.
The show‚Äôs most ambitious work is ‚ÄúThe Hypnotist,‚Äù which turns out to depict Mr. Wood sitting stoically in the office of a man whose oddly set expression seems to hold the entire, tilting room in check.
Each painting here presents a highly personal but impersonally observed reality that has been astutely cobbled together but is almost too much to take in. It is presented whole, but with all the seams showing for easy disassembly. That‚Äôs enough to make one of painting‚Äôs most frequent subjects ‚Äî the artist‚Äôs life ‚Äî seem new again.

Painting at its colorful, pattern-happy, and energetic best is on full-throttle display in the young Los Angeles artist‚Äôs third show at the gallery. Wood‚Äôs tilted pictorial flattening, in oil and acrylic on large canvases, connects the dots from Henri Matisse to Stuart Davis to David Hockney in ostensibly figurative scenes of interiors‚Äîa hypnotist‚Äôs office, a child‚Äôs bedroom, a sunporch‚Äîthat play optical games with abstraction. Birdcages and dog crates in storage become a meditation on the modernist grid, as does a shrinelike arrangement of vases. Art and life carry on their zippy conversation in a chockablock installation of smaller-scale gouaches in the back room. Through March 26.