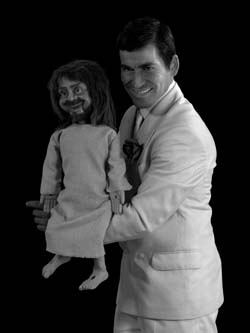 122 x 91cm
Jonathan Allenâ€™s bible-thumping alter-ego, Tommy Angel, is a character of seductive grotesquerie: a beguiling hybrid of Deep South evangelist preacher, 70s cheese-bag magician, and Sforzian political svengali. A contemporary carpetbagger for American Fundamentalism, Angel manifests in life-size photographic portraits, and the live performances which emerge from their illusory surfaces, drawing connotations between religious faith, secular magic, and art's hall of mirrors. Provocative entertainment, sleazy showmanship, and charlatan trickery blur as Allen interrogates the religious and political unconscious of our time. Tommy Angel #8 is one of a series of images depicting various magic routines or â€˜miraclesâ€™, each culled from the shared iconographies of Vegas and Christendom. Parodic and downright pervy, Allenâ€™s ventriloquist act with a Charlie McCarthy Jesus plucked straight from the cross is posed as a freakish Madonna and Child.

A white-tipped magicianâ€™s wand in the shape of a crucifix offers questionable salvation. Mind-reading and worship conspire in the cards on a church hymn board. A bible bursts into flames when opened. While the artistry of Tommy Angelâ€™s power is never fully hidden, the omnipresence of magicâ€™s relationship with religion and the relationships of power upon which both rely, is stirringly observed in Jonathan Allenâ€™s photographs and live â€˜magicâ€™ performances.

Allenâ€™s fictitious â€˜gospel magicianâ€™ persona presents a heady mix of Christian evangelism and glitzy magic showmanship. Described by one observer as â€˜a meeting of Billy Graham and David Copperfield via Donald Rumsfeldâ€™, Tommy Angel preens before his audiences, a brutal and narcissistic miracle worker deploying suspect wonders with casual ease. Allen recasts iconographical conventions such as the Beheading of John-the-Baptist, Madonna and Child, and The Baptism of Christ against a dark political landscape - with the West fixated on Islamic fundamentalism, he satirises fundamentalismâ€™s Christian face.

There is a curious inversion here - whilst Allen acts out Tommy Angel to create disconcerting still photographic images, his live performances seem to document the resulting tableaux. Fiction begets fiction. Tommy Angelâ€™s routines become a double-edged meditation on representation itself, highlighting the ambivalent power of illusion and its role in assembling our sense of the real.

Tommy Angel is a marvellous feat of illusion. Appearing on the one hand as a fictitious gospel magician in an ongoing series of black and white photographs bearing his name, and on the other as a potent zeitgeist of evangelical fundamentalism that rears its ugly head within the political landscape of our time, Jonathan Allen's artistic alter-ego is a creation of consummate disguise and conceptual conceit. And like all good disguises his influence is most potently registered through the use of images, as much as by a manipulation of them.

In the case of Tommy Angel #4 (2005), the implication of such concerns is carefully layered. Set against a black-out curtain, a 'headless' performer proffers a silver platter, upon which appears to rest the self-decapitated head of Tommy Angel. In composition, the image bears an uncanny resemblance to Christian depictions of John the Baptist's beheading, particularly to those that took the form of theatrical miracles, as commonly enacted in the tradition of the European medieval mystery plays.

Together these references interrogate the ways in which visual and religious truths have relied on the effects of stage-crafted illusion to illustrate information for deceptive gain. While Allen's work self-consciously foregrounds this stirring relationship, it simultaneously parodies how the potential for deception finds usage in the hands of today's evangelical preachers and crusading politicians.