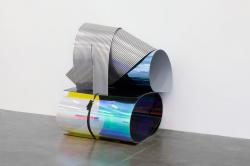 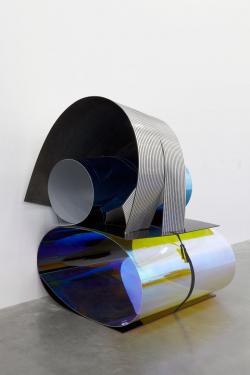 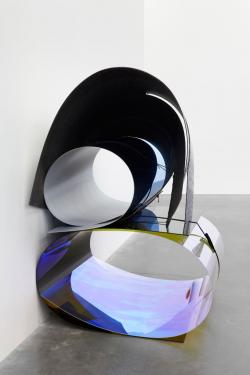 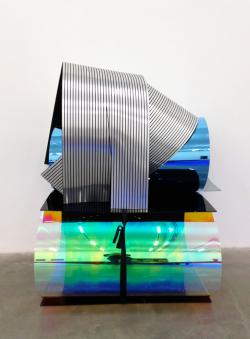 Julia Dault's taut and tense sculptures are ready to spring open from their trappings. Plexi materials strain at their containment, contorted and controlled by strings and boxing glove strapping, liable to run away at any moment. Dault's sculptures insist on the hand, indeed the body, of the artist herself. Each is assembled individually and literally bent to the artist's will - signs of the struggle are evident and in the marks and scratches on the materials' surface. This specificity of time, space, and body is emphasized further through titles such as Untitled 21, 10:30 am - 4:30 pm, June 10 ; thus marking each work with the exact date and time of their making (note that some are slower to make than others due to the length of time that the artist has wrestled with the materials) and revealing some of the inherent pragmatism of her practice - if an assistant is to help make the piece, their name is entered into the title of the work. 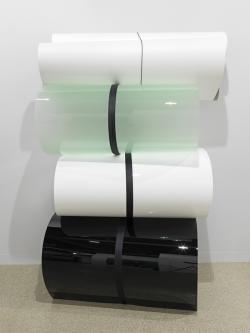 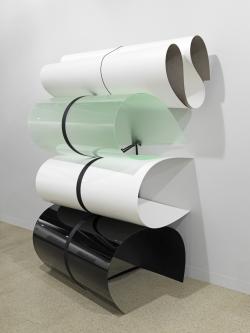 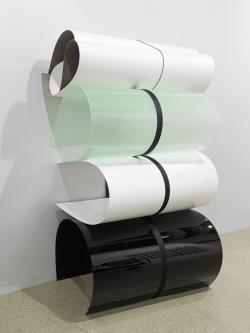 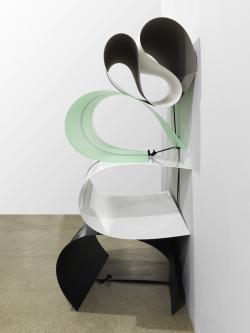 The performative action of their creation is matched by a sheer joy in material aesthetic quality. In assemblage, mundane and industrially produced materials such as Plexiglas and Formica are transformed into swathes of colour, from flat plane to cylindrical form, cutting volumes out of space in an almost architectural gesture. Counterpointing opacity and translucency the objects summon both delicacy and robustness. As such Dault reboots a minimalist art historical inheritance luxuriating in plastic sheens and metallic reflections through a uniquely synthetic palette in a form of, what she terms, ’dirty Minimalism’.

Julia Dault, ADHT faculty member, is garnering much deserved attention for her work as an artist. This month, she is featured as one of the 100 artists to watch in Modern Painters Magazine (December 2011/January 2012 edition), a major source of commentary on contemporary art and culture.
Additionally, Dault will be part of the New Museumâ€™s 2012 Triennial, which is the only recurring international exhibition in the United States devoted to presenting young artists from around the world. This, the second edition of the Triennial, is titled â€śThe Ungovernables.â€ť The main theme surrounding the show addresses the urgencies of a generation who came of age after the independence and revolutionary movements of the 1960s and 1970s. The Triennial will open in February 2012.
Dault, whose work was most recently featured in a group exhibitions â€śEverything Must Goâ€ť at Casey Kaplan Gallery and â€śMaking Is Thinkingâ€ť at Witte de With in Rotterdam, will also be featured next month at Casey Kaplan Gallery in a group exhibition titled â€śRotary Connection.â€ť

Toronto native Julia Dault grew up in Torontoâ€™s art world, her dad is Gary Michael Dault, the long-time critic at the Globe and Mail. And despite Juliaâ€™s best efforts to rebel against art criticism she found herself drawn back into the family business. For a little more than a year sheâ€™s been busy penning the weekly â€śAt the Galleriesâ€ť column found Thursdays in the National Post.
Somebodyâ€™s been paying attention because Dault was nominated for an Untitled Art Award alongside such art criticism veterans as RM Vaughan, Philip Monk and her own dad. Torontoist chatted with her about growing up steeped in art, why people should see more art and what sheâ€™d put on her new iPod.
Growing up did your parents ever push you into the arts?
No, but I was brought up around art. We used to have these insane dinner parties when I was a kid. Weâ€™d call them â€śthe waifs,â€ť for Christmas dinner there were artists who wouldnâ€™t have family in town so weâ€™d invite them over, give them all turkey. I wouldnâ€™t call that pushing.
Itâ€™s quite nice that my dad and I are both writing about art. Our conversations are great, we talk about artists, I mean, we donâ€™t exchange notes or anything considering he writes for the Globe and I write for the Post, but it makes for great dinner conversation.