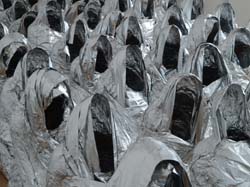 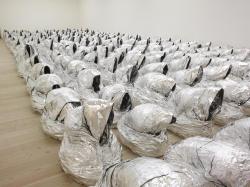 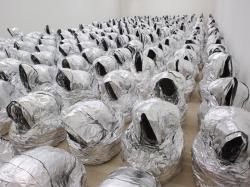 Dimensions variable
In Ghost, a large installation of a group of Muslim women in prayer, Attia renders their bodies as vacant shells, empty hoods devoid of personhood or spirit. Made from tin foil - a domestic, throw away material - Attiaâ€™s figures become alien and futuristic, synthesising the abject and divine. Bowing in shimmering meditation, their ritual is equally seductive and hollow, questioning modern ideologies - from religion to nationalism and consumerism - in relation to individual identity, social perception, devotion and exclusion. Attiaâ€™s Ghost evokes contemplation of the human condition as vulnerable and mortal; his impoverished materials suggest alternative histories or understandings of the world, manifest in individual and temporal experience.

Regina Hackett: I reviewed Kader Attia's exhibit at the Henry on March 7, here.
Ten days later, he emailed me a thoughtful response.

Artists seldom respond to critics, especially a point by engagement of themes considered.
I think he's right about rats. Even though I acknowledged that I hadn't seen his installation, only the photos, I was unwise to speculate about the installation's effects.
Here's Attia, in full:

Dear Regina Hackett:
I hope this email finds you well.
I have read your article about my show art Henry Art Gallery with attention and have found it really interesting.
The description you do of the "plastic bags" work is moving and I am glad you have experienced it this way. I think that you have well felt and described the poetry that I intend to give in my work.
As far as I am concerned, I think that an art work is more an experience than an object. The shape is only necessary as a reference to its "history", its historical content, as Michel Foucault would say.

In an ephemeral work like "Flying Rats", which disappears as pigeons eat the sculptures, in a work like "Ghost", experience is more important than its final shape

I am very flattered about the Abakanowicz reference, as I really like her work. Nevertheless, I think the similarity between the "Ghost" and Abakanowicz sculptures is not as obvious as it seems to be. Art is not working with WYSIWYG (What you see is what you get) rules. It would then mean that the "Embryology" series of 2002-2003 would be compared to a Franz West sculpture without colors. First of all, Abakanowicz's shapes, from their size, rough aspect, do not intend to be really human, whereas I care a lot about casting my sculptures directly on women bodies, to get their trace.

Beside this, as you mention, Abakanowicz's sculptures are "peasant-hardy masses", whereas the "Ghost" sculptures' fragility and ephemeral nature are entirely part of the work and especially of its meaning. Here is then another difference between her and my work. She indeed uses bronze and then fits her discourses in duration, eternity, when I have conceived "Ghost" like an ephemeral work.

La Piste d'atterrissage (The landing strip), 1997-99, is the name given to a deserted stretch of beltway at the northern edge of Paris by the Algerian transsexuals and transvestites who work there as prostitutes. It is also the name that French photographer Kader Attia has given to his color-slide installation about the lives of these several hundred "creatures" (as they call themselves) who have left Algeria under threat of murder, made their way clandestinely into France, and, for lack of working papers, "landed" on the sidewalks of the boulevard Ney in their wigs, miniskirts, and spike heels.

The fourteen-minute duration of La Piste d'atterrissage turns out to be just enough time to permit the repeated viewings, one after the other, that the intensity and the complexity of this work invites, if not demands. There are 156 images in all--a kind of collective family album of snapshots, portraits, and souvenirs recalling celebrations and protests, oriental interiors and mean streets. They form a vertiginous patchwork of mostly female faces and mostly male bodies, sidewalks, knickknacks, and leopard-skin sofas, shuttling the viewer back and forth between genders, countries, and cultures. But after two or three times around the carousel (what better medium/metaphor for a nonlinear narrative in the transnational tradition that includes not only The Arabian Nights but also Dallas and NYPD Blue?), the logic of Attia's presentation begins to emerge: five miniepisodes on the themes of exile, identity, community, the sex business, and (in guise of an ending that is neither happy nor sad but literally "to be c ontinued") the struggle for legal residency in France. All of which unfolds to the rhythms of Algerian pop songs and traditional music, as well as one "audio-verite" sequence recorded on the boulevard.