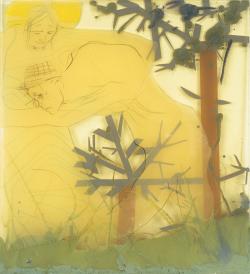 Pen, wax crayon, pencil on paper and epoxy resin on board 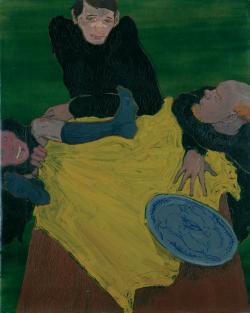 Boat varnish, watercolour, pen and pencil on board

50 x 40cm
Untitled shows a group of black-clad men gathered around a table, immediately suggestive of conspiracy and covert sexual tension. Kai Althoff portrays the intrigue in the paint itself: yellow confronting black, the tenuous texture of the fabric and the oblique fly-on-the-ceiling angle which compresses the subjects into their opposing directions. His all-male cast of characters gives credence to the corruptibility and heroism of youth. Pictured with an authoritative voyeurism, Kai Althoff infers a complicit approval to their coven.

11 x 21cm
Incorporating all the lush patterning and anthropomorphic grace of art deco, Althoffâ€™s genre painting draws equally from comic illustration and graffiti. Pretty boys with trendy haircuts, designer jackets, and mobile phones are celebrated with a timeless essence. Painted on brown paper, Dei Handi utilises crafty and transient material to achieve an historical authority and authenticity of the avant-garde. Althoffâ€™s contemporary scenes expose the same dark mores as his historical fables: mob mentality fed by bravado and peer pressure. Within the innocence of a discotheque, brews a condition ripe for barbarism. 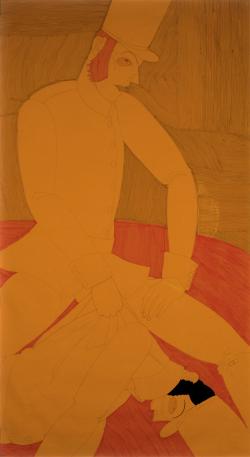 pen, pencil and tape on board 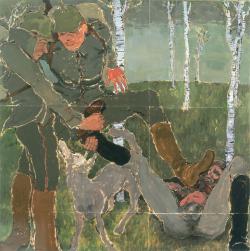 50 x 50cm
Kai Althoffâ€™s paintings of Prussian soldiers flirt with a homoerotic subtext. His decorated brotherhood thinly veils their carnal motives under the guise of authority. He paints his violence with a sensual tenderness, rendered in the creaminess of folk tale fantasy. 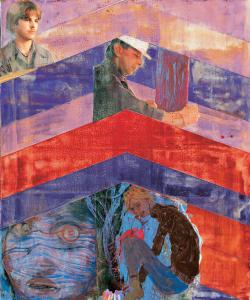 60 x 40cm
In Winter, Althoff uses a variety of media to add an unexpected quality to his graphic composition. Approaching the painting itself as collage, Althoff flaunts difference of style in each separate element to create tension and possible narratives within the unified whole. Dark dream-like scenes adopt a painterly quality of reverence: a crouching figure is painted over crumpled aluminium foil, creating both a geological texture and reference to gilded religious icons. Sheltered like a grotto by a hard-edged militaristic design, punctuated by photographic images of stylised masculinity, they feed the painting with spirituality. Layers of ephemeral hues and high-gloss varnish create a transcendental illusiveness, perpetually flitting between gravitas and disco chic. 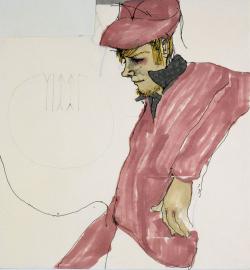 watercolour, pen and pencil on board

25.5 x 24cm
Kai Althoffâ€™s portrait is rendered with rudimentary simplicity: shape, tone and colour create a totality of exquisite presence. Untitled boasts a contained elegance, deceptive in its complexity. Sexualised with reference to Egon Schiele, Untitled is an overture of dandyism. Kai Althoff tenders this painting with the contrived scrutiny of the most discerning connoisseur. Haughty and self-possessed, Kai Althoffâ€™s boy is a perfect specimen. Both ruffian and swan song, he encapsulates the duplicity and danger of idealised beauty.

Band of outsiders - The Art of Kai Althoff

Kai Althoff neither owns nor rents a studio. Not that his production doesn't merit one--galleries in Cologne, Berlin, and New York all show and sell his work. Althoff simply refuses an extra space, unwilling to divide the spheres of work and life. He prefers that his output, even when large in scale and technically complex, be conceived and, if possible, realized in the privacy and relative autonomy (that is, without the busy appurtenances common to most contemporary artists' places of work) of his carefully furnished two-room apartment in the center of Cologne.
This atelier abstinence may be unusual for a successful artist. But Althoff (born 1966), who avoided art school and instead created a persona based on a number of flamboyant, dandyish refusals and a range of multifaceted productions, doesn't fit today's bill of the artist as hyperprofessionalized international road warrior. He answers even less to the desires of a cultural moment whose main criterion of legitimation continues to be "the now." Alrhoff's dense and difficult work, which spans several registers (installation art to literary writing, painting to performance, music to pottery), eschews obvious signifiers of "contemporaneity." He systematically undoes the shackles of the present and retreats into pasts both fictional and actual, even biographical, inhabiting hybrid "cultural histories" of heretofore unimagined sincerity, euphoria, and cruelty.

Unlike his 1997 debut at this gallery-a generic installation of found objects, postcards, Plexiglas panels, paintings, and a maze of gray particleboard-Kai Althoff's second exhibition is as memorable as it is idiosyncratic. Even so, walking into it is disconcerting. Althoff has no trademark style and takes a lot of visual risks. His work can be ugly to look at. Drawings are encased in tacky plastic; the surface of his paintings are often broken and bumpy. The 30 smallish paintings and drawings-which alternate between abstraction and figuration, and are hung in clusters-initially disappear into the looming space of the gallery. Slowly, however, what starts as a fuzzy jumble turns into a tightly woven, if disturbing, exploration of karma and history.
The one sophomoric objet trouvďż˝ sculpture (made of two chairs and a sword) doesn't spoil the proceedings. Using diverse materials such as resin, lacquer, and varnish, Althoff makes paintings with a pearly, nervous touch. His colors are mostly murky; his outlook, ominous yet tender. A half-dozen abstract pieces function nicely as palate cleansers and mood setters. Among them are two so-so hazy rainbow paintings, a couple of Emile Nolde-ish looking landscapes, and one muddy-colored slab I don't know what to make of.