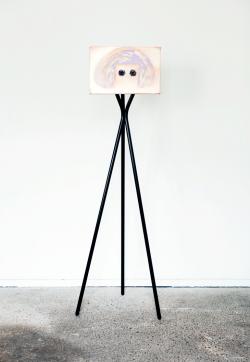 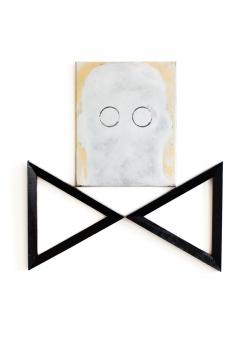 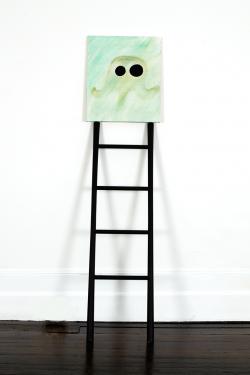 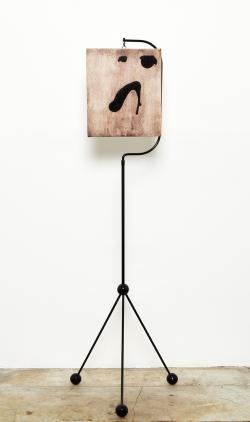 Oil on canvas and powder-coated steel

WHO, WHAT, WHY | KATE HAWKINS: THE KING OF HEARTS HAS NO MOUSTACHE
February 16 2012, by Daisy Woodward, AnOther Magazine

Who: London-based artist Kate Hawkins is fascinated by social rituals and facades, as well as notions of sincerity and theatrical artifice. These themes underlie much of her painting and performance based practice and her latest exhibition, which opens at Gallery Velatomorrow, proves no exception. Entitled The King of Hearts Has No Moustache, the display considersmoustaches ‚Äì the ultimate symbols of disguise and theatricality.
What: The exhibition‚Äôs bristly protagonists are rendered in a pastel-infused, abstract series of paintings, which is both engaging and playful. The manner in which the paintings are displayed is as important as the works themselves as it makes transparent the mechanics of producing and hanging a painting, calling into question ideas of active and passive spectatorship ‚Äì another aspect of ‚Äúperformance‚Äù. Hans Heights includes a ladder propped below the painting as if the hanging process is still underway, while The Sartorialist Without Any Clothes is hung from a tripod-like device, standing next to a (now redundant) wall.
Why: Hawkins' exhibition ties in with AnOther's acknowledgement of the moustache late last year, which celebrated the carefully groomed facial hair of, among others, Maurizio Merli, Dennis Hopper in his Easy Rider era and James Taylor. In her investigation of the moustache and its associations, Hawkins is following in the footsteps of artists such as the flamboyantly ‚Äòtashe-adorned Salvador Dali and Mona Lisa defacing Marcel Duchamp (indeed, one of Hawkins‚Äô pieces is titled L.H.O.O.Q., paying direct homage to Duchamp‚Äôs work).

Through performance, video and painting Kate Hawkins produces work that confronts popular ideas of conformity and dissent, exploring the fallacies and idiosyncrasies of the social rituals, manners and mores that govern contemporary relationships. The titular video work, Anarchy is Ordinary (2008), considers how ideas of dissent have become entrenched within contemporary society.

Ashley Vaughan: For your last exhibition at Bischoff Weiss, the gallery labeled you as a performance and video artist, yet you also work with painting and drawing. Where would you situate your practice?

Kate Hawkins: Perhaps somewhere in the middle? I try not to think about it too much although I would like to research more comprehensively in regards to how performance and painting might begin to sit alongside each other within my practice. I suspect this will come down to a question of display (or packaging) ‚Äìwhich relates back to my current thinking around the cosmetic, ideas of self-design and empty brands that are synecdochically less than the sum of their parts: spaces to be filled.

AV: What brought about the transition from painting to video, and back again? Could you explain your process? Do you start with a concept or idea and define it through the medium that works best?

KH: In short yes. I suppose the transition from performance to painting occurred because my thinking became flatter and increasingly focused on the idea of facade as opposed to what was underlying it. The performances I was doing at the time were dealing a lot with surface but I was not! I quickly realized that painting was the only way forward. In that sense it was a new and terrifying challenge: I basically wanted to see if I could do it (I think I have also always subconsciously aspired in being ‚Äòa painter‚Äô). Nowadays however the two ways of working exist much more in tandem - I think it‚Äôs a healthier balance.