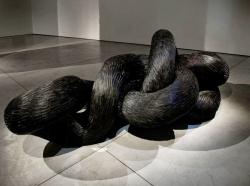 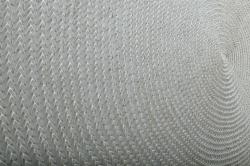 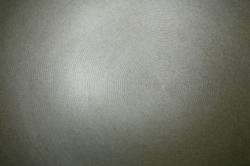 
Short documentary on a sculptor whose medium is feathers
Crane.tv

Artist Kate MccGwire creates remarkable sculptures from carefully-curated feathers sent to her from around the globe. This short documentary examines her philosophy and aesthetic.

Artist Kate MccGwire, famed for her feathered sculptures, offered us an exclusive glimpse inside her studio.

MccGwire is offering a work entitled Cradle for an auction to raise money for childrenŌĆÖs charity Rays of Sunshine. It takes place at ChristieŌĆÖs tomorrow (September 7).

Kate MccGwire graduated from the Royal College of Art in 2004 and has since exhibited all over London, winning a solo show at 2009's Heart of Glass. Her most recent installations are made from thousands of pigeon feathers, flowing water and even a mouldy growth on a wall.

Hello Kate. Why pigeon feathers?
I am currently using pigeon feathers as they come from a bird that is generally reviled - regarded as vermin and referred to as ŌĆśrats with wingsŌĆÖ. I started to collect pigeon feathers that moulted from the birds in a shed next to my studio ŌĆō I realised that they were actually very beautiful.
Yes the layering of the charred paper is similar to that of the feathers ŌĆō my studio is very near a geese colony and I was astounded to see how similar the layering of feathers on a gooseŌĆÖs back resembles ŌĆśSEETHEŌĆÖ/ FUME. My studio burnt down in 2007 and, where I had stored paper, the edges had become burnt but the internal sheets remained perfectly white. The delicate charred edges fascinated me and after the trauma of the fire destroying my work, I decided that I wanted to be able to control fire. The beauty and delicacy of the layering is somewhat of a happy accident and one that I am working to exploit ŌĆō I still have further plans for this series of work.
How is your artwork made?
Very much trial and error ŌĆō playing with everyday/discarded materials.
Where do you get your feathers from - assuming you don't go around plucking pigeons?
I have been very lucky and collect them from numerous sources all over the UK

Tell us about BROOD, one of your installations that was snapped up by Saatchi in 2004?
BROOD was my MA show piece from the RCA Sculpture department ŌĆō I had been playing with/arranging the several hundred wishbones that I had collected over the years and then I was given the most amazing space for my final show. The wall was 7m x 5.7 m. I worked out that I needed approximately 27,000 bones to cover the entire wall ŌĆō it took me a about five months to collect that quantity of bones from poultry processors. I received the bones covered in flesh and had to boil them up to clean them. The bones were arranged over the entire wall in a spiral ŌĆō laid out by eye it assumed a sort of rhythmic pattern. It took 10 days to install at the Saatchi Gallery in the exhibition called Galleon and Other Stories in June 2004
What have you got planned for your next project?
I am co-curating a show in June called The Space Between at St Pancras Crypt in London. Opening on the 5th of June and running to the 21st, there are nine artists - Marilene Oliver, Annie Cattrell Amanda Couch, Jan Dunning, Richard Ducker, Joy Gerrard, Kate Street, Esther Teichmann and myself. The website will launch soon www.thespacebetween.org.uk.

Some years ago, Kate MccGwire turned Charles Saatchi's head at her degree show at the Royal College of Art when she used a chicken wishbone as the basis for her installation Brood. The collector snapped it up to display in his Thameside gallery. Now, she has developed the bird theme, collecting bird feathers of all varieties ŌĆō duck, pigeon, magpie, pheasant, crow ŌĆō for works of art made from feathers. She receives the material from some 150 pigeon racers, farmers and gamekeepers. "Every time the pigeons moult, the racers send me envelopes filled with feathers," she says. Crow feathers are a different story. "They are killing song birds and damaging crops so farmers and gamekeepers shoot them and I get the feathers." I heard of her recent work (Writhe) when I received an invitation to her latest show, at Pertwee Anderson & Gold in London, which came with a mallard feather attached. The pi├©ce de r├®sistance will be Slick, a blue installation made entirely of magpie feathers: "It's a comment on magpies being regarded as thieves, the deviant species of the bird world," MccGwire says. The work features in a group show opening on 21 February. Hopefully, it won't ruffle any feathers.

Kate MccGwire studied at the RCA. Her MA installation, ŌĆśBroodŌĆÖ was installed at the Saatchi Gallery in 2004. She has done the ShengHua Residency in China and the Art Omi residency in New York. In 2008 she won of the Heart of Glass competition in London. In 2009 exhibited with the Contemporary Art Society, The New London School Berlin, Tunnel 228 with Punch Drunk and The Age of the Marvellous, London She will be making a large-scale installation for the Museum of Art and Design, New York in April 2010
What have you got planned this week?
ItŌĆÖs a busy week! I have new work in a group show ŌĆśStrangeness and CharmŌĆÖ at Viktor Wynd Gallery, opening on Thursday 4th, 11 Mare Street.
What do your parents think you do?
They are confused, love what I do but would really like me to get a proper job!
Who do you look like?
My Mum
WhatŌĆÖs your favorite sense?
Touch
Tell us something people donŌĆÖt know about youŌĆ”
I sing in a fantastic choir
Did your education count?
Yes, but I really wasnŌĆÖt into it the first time around. Studying at RCA as a mature student was an amazing experience and something I constantly pinch myself about
What word canŌĆÖt you spell?
Just about everything
Tell us a good fact
Distrust in red-headed people stems from Judas Iscariot having red hair
WhatŌĆÖs Next?
ItŌĆÖs going to be a busy few months ahead, March is a new installation in the Tatton Park Biennial, Cheshire. Then a large scale feather installation at the Museum of Art and Design in New York, in April
WhatŌĆÖŌĆÖs your ŌĆśPlan BŌĆÖ?
No plan B