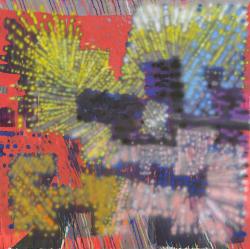 “I like the feeling of looking through things to a world you can’t quite access, or a residue of a former world that you can’t quite get to, and I try to have that in my paintings”.

The balance and symmetry in Keltie Ferris’s paintings makes it tempting to look for underlying grid formations within their layers of colour and varying styles of application. Broad brushstrokes and sprayed on oil paint, are interrupted by patches of smudged colours appear to energise neighbouring, more defined parts of the painted surface, particularly those in 00>><<00 and ((!!!!!)) which resemble the pixels and repetitive shapes found in computer games like Tetris. 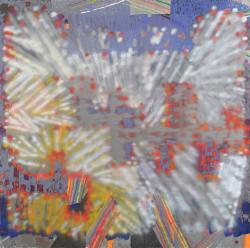 Ferris’s paintings are inspired by subjects that range from the broken up pixelation of digital images, rubbed out graffiti on New York streets to the glimmering city lights that are visible from her Brooklyn studio at night. She has commented that “bedazzled energy, and bright artificial light” are themes that have filtered into her painting process which explains the underlying, palpable current within her paintings.

Ferris started to use spray paint, in order to make gestural, expressive marks that moved on from the physical and historical implications of the traditional brush stroke. By using thinned consistencies of oil paint sprayed on, rather than an aerosol, she is reproducing the immediacy of a graffiti style mark, and its directness, on the same level that she might reference the hands-off monochromes of Josef Albers or the pictorial, free-wheeling depth found in the paintings of Albert Ohlen. 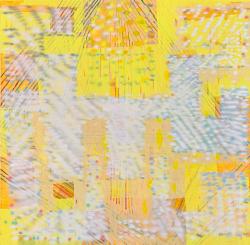 Keltie Ferris paints with her own kind of well-informed vengeance, and it gives her abstractions a taut, slightly hard-bitten decorative verve. Her paintings combine a distinctly urban jangle with a slightly tawdry, rather literal inner light, while deftly sampling abstract strategies that range from Frank Stellaâ€™s stripe paintings through lyrical abstraction to graffiti art.
Built in layers of thin washes, chevrons of bright parallel lines in oil pastel, and strings, grids and explosions of glowing spray-painted nodules, as well as blocked-out areas and bands, these works are often topped with patchy, scraped-down areas that try but fail to assert a strictly vertical plane. Much of their power stems from the way the underlying portions constantly break, leak, flame and peek through, complicating any single spatial read. Sometimes the space tilts inward, which creates the effect of seeing expanses of city lights through low-lying clouds; sometimes the surface expands forward in neon fluorescent froths, a little like fireworks.
Whatever material Ms. Ferris uses, her technique usually involves emphatic parallel gestures that provide an infrastructure of order and method. The surface rhythms evoke both the modernist grid, angled this way and that, and woven textiles, seemingly appliquĂ©d, embroidered or otherwise embellished.
In all, these works involve what could be called fairly high levels of pictorial contamination. One looks forward to Ms. Ferrisâ€™s upping the ante even more.

Keltie Ferris a 2006 Yale MFA who participated in the height-of-the-market, art-department-raiding exhibition "School Days" at Jack Tilton Gallery in 2006--has a lot of good ideas, even if they're not all fully developed yet. Her debut show in New York coincided with a solo project at the New Art Dealers Alliance fair in Miami and included five medium- to large-scale abstract paintings that employed various techniques. The era of fancy, computer-generated stencils is waning; Ferris, like many of her peers, does things the old-school way, masking areas with tape and then applying pigment with palette knives and brushes as well as by spraying--but not with an aerosol can; Ferris liquefies and then administers oil paint with a sprayer.
It takes a while to determine what is going on in these works. Close examination reveals not only the techniques but also, in canvases including Sincerely Yours (all works 2008), "other" paintings lurking below like traces of a palimpsest, and, in Stritch and Boy Wonder, passages worked on, then covered while the broader area was painted, and then exposed again, creating contrasting textures and palettes.
Part of what's interesting (although this only reveals itself over time, with prolonged looking) is how much information Ferris manages to conceal. Her approach reminds me of Synthetic Cubism, her compositions hiding in plain sight conceptual-optical tricks akin to Braque's and Picasso's trompe l'oeil wood grain. The artist's first show, two years ago at Kinkead Contemporary in Los Angeles, featured paintings whose seemingly abstract compositions, when seen at a short distance, reveal "primitive" masks. The paintings at Sunday contain vestiges of those figures, in the geometric shapes created by masking. Ferris might be considered part of the faux-naif resurgence that has been in full swing for over a decade, but she belongs to the recent wave of painters who have shifted that dialogue from figurative expressionism to abstraction.

A big question now is the sincerity/irony problem in abstract painting. In my own paintings, I think a lot about the structure of jokes to attempt to articulate some sort of intelligent middle ground that encompasses sincerity and â€śbitchinessâ€ť as Carroll Dunham aptly calls it. Jokes have to be true to be funny; they allow you to laugh at something sad or wrong. To ring true, they must come from an honest place, not simply from bitterness. Like a good joke, a great abstract painting has to come from a sincere place and be aware of the absurdity and complexity of that place as well as this world in order to avoid naivetĂ©. Now we require of the artist some sort of distance from his/her work in order to see a bigger picture, but I would argue that it should still be from an honest internal spot.
In a larger sense, in an attempt to answer the question, â€śWhat is the state of abstraction today?â€ť I compiled a list of various directions I see happening now, particularly among younger painters:
Abstraction built on arcane folk references (numerology, psychedelia, your grandfatherâ€™s drawings): Interesting ideas with strange looks that have yet to be incorporated into the language of serious painting. Perhaps this art is the most personal but unambitious painting possible. It can thus be original and free, but sometimes itâ€™s just small-minded.
Abstraction built on phenomenology and perception: Thereâ€™s very little of this right now in painting; rather it is more present in the type of sculpture in the New Museumâ€™s Unmonumental show from 2007. I think the work of Gedi Sibony, for example, offers exciting possibilities to painters, where attention to texture and stillness speak volumes. Though very few painters are interested in this right now; off-hand I can only think of Mark Barrow.
Abstraction as action: There are very few of us under 40 who are doing this. Some get included in this tiny camp but are actually part of the next two categories.
Abstraction as action for the non-believers: By this I mean, Christopher Wool and his descendants. Or maybe Albert Oehlen did it first. Here there is a lot of distancing techniques from mark-making with a brush (spray paint, silk screening, Xeroxing, and other printmaking techniques). Sometimes it feels this simple: brushes and palette knives are for the believers; layers of prints and spray guns are for the critics. Of course it isnâ€™t; Rauschenberg started with that sort of critique, but of course didnâ€™t end there.
Abstraction as messiness: This work is discussed in relationship to AbEx history, but is actually messy figurative painting, messy text painting, or messy landscape painting. Nonetheless, it is interpreted as abstraction, just because de Kooning still looms that large in New York. If itâ€™s expressionist enough, mark-making can overpower any image, so that the picture is read mostly abstractly, especially by New York artists and audiences. Nothing confuses the discourse more than when AbEx is reduced to messy painting in press releases, blogs, and reviews.
Abstraction as a follower of the Germans: black and silver, sometimes mimicking photographic processes, somewhat understated and self-hating. A lot of pointedly small abstract painting clings to this in hopes of not seeming macho or confident, God forbid.