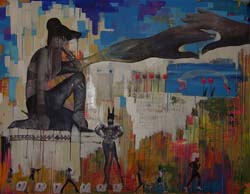 Acrylic and collage on canvas

MS: Are there in your opinion specificities of the Cairo/Egyptian art
system?

KH: Art started in Egypt thousands of years ago; it just served a particular function then, either to document (painting) or as part of the religious institution (sculpture in temples and tombs); with the early years of the twentieth century, official governments, all under the British occupation tried to remove the cultural influence disseminated after 400 of Ottoman reign.

So Egypt saw the revival of the arts: music, writing, theater, painting and sculpture; being the first and for decades the ONLY country in the East with a Fine Arts School, we now have a century long art scene; perhaps the scene have nothing to do with what goes on at a particular moment with the rest of the world, yet there is a ŌĆ£specificŌĆØ movement.

As for the specificity of the system, Egypt adopted a more or less European system of education in till the early fifties of the twentieth century; with the revolution/coup dŌĆÖetat of 1952, the system of education changed to serve what was known then as the ŌĆ£national ProjectŌĆØ, a project known in political economy as Pan-Arabism; this system adopted in theory the Nationalistic specificities of the extreme right, and a Soviet pattern of socialism. This ŌĆ£wild amalgam sustained till the military defeat of 1967, after which there was a long process of revisionism to the then contemporary history and adopted/applied systems.

Today the then art system is still run with the type of obsolete management that prevailed in the sixties, simply because waves of reforms in the past decades never approached culture since culture has never been a priority.

The hierarchy goes as follows: top of the hierarchy is the ministry of culture, then visual arts are run by what is known as the cultural sector, which supervises all public art spaces, dictating many times who exhibits and who does not.

For the past two decades an independent art movement with self-financed or privately funded projects, established itself as an omnipresent competitor to the ŌĆ£relatively wealthyŌĆØ state run system.
MS: What kind of role, if any, does art and culture play in contemporary Egypt?

KH: Art, especially film, music and literature have been indispensable for Egyptians for a century today; of course those arts, and visual arts too, are not "indispensable" for aesthetic reasons; rather, representative and realistic styles have been more successful than simple aesthetic methods of expression. There were decades when certain arts boomed and others declined: in music it was the first four decades of the twentieth century, while in film it was the fifties and sixties. Visual arts, at that time only painting and sculpture were recognized, flourished extensively in the fifties and sixties, for the simple reason that the revolution required cultural representation; a genre of "social realism"
And "ŌĆśrevolution arts" were inflicted on the public; artists, painters and sculptors, became recognized at that time; a grant was created by the state to encourage artists to be full-timers. Only realistic and representational art was encouraged then.

Today, after the effects of cultural globalization, the Egyptian society is passing through a time of "priority selection"; in such times, with identity and economic constraints, art and culture are not a popular product to consume since it takes a priority that comes after fulfillment of basic needs.

Artists and cultural operators today are all experimenting in the Middle East, not just Egypt; eventually a more stable role for art and culture will be established in the near future, at the end of decades of experimentation.


Interview with Predrag Pajdic, curator, for the projects This Day and Recognize, at the London Tate Modern and Contemporary Art Platform, respectively

PP- Egyptian contemporary art scene is certainly thriving at the
moment.
How do you see yourself as a part of this almost renaissance-like movement?

KH- I must say that it not a co-incidence that the interest in Middle East contemporary art practices started after September 11, 2001; with the current American administration and the decision to lead a new "crusade" of the "free world" against "terror", I think the "real people", and I mean by those the whole world who is not in the American administration, anticipated the disaster, and tried to look for activities and event that would initiate a dialogue and enhance bridging between East and West.

The 9/11 disaster was just the peak of misunderstanding between "components" of certain cultures, and sage voices would look then for methods to dialogue, while some interested parties would ignite war.

So where I am in all this; I have been working in my studio for around 23 years; I started with a state-funded art movement, what we in Cairo call now "the establishment"; this establishment became futile as we progressed in our careers: I personally could not talk about just "aesthetics", or enter in debates of "the heritage versus modernity" and similar obsolete critical termes still in fact prevailing today; I wanted to probe the social changes happening in the nineties, the new behavioral traits in the society acquired by the bombardment of parabolic satellite images.

So I, among others, decided to go independent even if we do not exhibit; I started exhibiting in private galleries in 1996 with the then Cairo-Berlin gallery (now closed down after the German owner deceased). In 1999 I went with the Townhouse gallery, which by then was already considered as stealing artists from "the establishment".

The advantage of being independent is the liberty of auto-production; with painting it is attainable, more difficult though when you work with digital media.

Despite difficulties, today I work in Cairo in a beautiful and dynamic movement of independent artists, who belong to two generations, and whose work reflect a certain quality on both technical and conceptual levels; the work is also representative of the current social change.

The practices of those artists just demonstrate that exquisite art always existed here; it is just the international interest that comes always late.

PP- Do you think that such disaster as a terrorist attack has to happen in order for world to take a notice, in this case the Middle East?

KH- Not really; it does not have to be terrorism; it is terrorism because the Middle East region is currently congested: eternal political regimes/autocracies, mal-distribution of wealth among the arab states, and the sudden behavior change due to globalization and the open skies phenomenon.

Notice that interest in Russian artists came only after the perestroika; interest in the Chinese art came later; before it was latin American art, etc; you see, I personally think that the "interest" has limited resources like everything else?: it cannot smile for everyone at the same time; so it wakes up and demonstrates only after "something" happens. It was nice in the case of the prestroika, even nicer in the case of Berlin wall, interesting with the reform of the Chinese system, but in case of the Middle East, it came after havoc, that’┐Įs all.

PP- Do you think that this "interest" in the Middle East is here to stay for some time, or will it wear off as any novelty after some time?

KH- See, so far there has been a pattern for this "interest"; I personally could always sense a three-to-five years pattern, especially that the international art scene gets new players every few years too; twenty years ago there was nothing called "independent curator"; the game involved only 1-artist 2-gallery 3-critic; remember that Germano Celant in 1967 was introduced as "critic" when he proposed the arte povera artists, the same applies to Achile Bonito Oliva when he introduced the transavangardia: though they were both playing the parts of curators.

After the Magiciens de la Terre and the first introduction of African artis to the world in the late eighties and early nineties, the game now involves the following in order: 1-curator 2-gallery 3-artist 4-critic.

I must say the first "premonition" of an internationa interest started in the nineties with the introduction of Mona Hatoum, then Sherin Neshat and the mid-nineties with Gada Amer: you see, all girls from the Middle East; the perspective then was insinuating a new genre of ŌĆ£neo-feminismŌĆØ, not THE Middle East, but women from the ME. Not a single name of a male artist from the Middle East comes to mind.

Of course names like Dafrawi in Switzerland or Marwan in Gernany do not count AT ALL in the formula: they were career artists who lived in the West for many decades and were recognized on a small local (in the host country they became citizens of) art scene as ŌĆ£of so-or-so originŌĆØ, i.e. good art of exotic origins.

There was an "authentic" individual interest from two curators I know of who sensed a potential interest in the region: the work of Marilu Knode of the Scottsdale Museum in Arizona (then at INOVA in Milwauki), and of art historian Martina Corgnati whi is now finishing her book about Middle East contemporary art practices, the first on the subject.

So the real "interest" started in 2004, and I would say it will go on for perhaps 2009; some artists will stay and sustain later as "international", not Arab.