Vitaly Komar and Alexander Melamid
COMPOSITION WITH MISSILES IN ROTHKO

Oil and tempera on canvas

Vitaly Komar and Alexander Melamid
ONWARD TO THE VICTORY OF COMMUNISM! 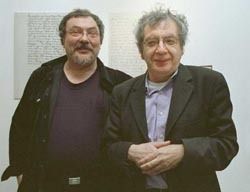 “If pop-art was born by the overproduction of things and their advertising, then Sots Art was born of the overproduction of ideology and its propaganda, including visual propaganda… After the end of the Soviet Union an occurrence of Social Realism was put into historical quotation marks and became Sots Art.” Vitaly Komar Sots Art is a term, which was created by artists and co-authors Vitaly Anatolyevich Komar and Aleksandr Danilovich Melamid in 1972 as an analogous movement to western pop-art and combined the names of two movements in 20th century art: Soviet “Socialist Realism” and American “pop-art.” In their early works from the late 1960s and early 1970s, the artists of Komar & Melamid ironically transformed familiar slogans, signs and forms of Soviet propaganda which had lost their ideological pathos, and had become objects for artistic representation. After emigrating to New York in 1977, Komar and Melamid created several series of work (“Nostalgia for Social Realism,” 1982-83, “Anarchic Synthesis,” 1984-86) in which the artists juxtaposed different styles and layers of history, using the “political polyptych” method, which they had developed. In 2004 the creative union of Komar & Melamid disbanded. “Komar and Melamid borrowed elements from the official myth, reexamined it and presented a new collection of cultural paradigms.” Margarita Tupitsyna