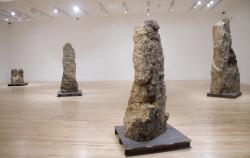 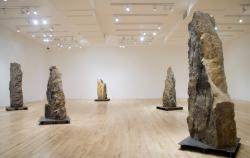 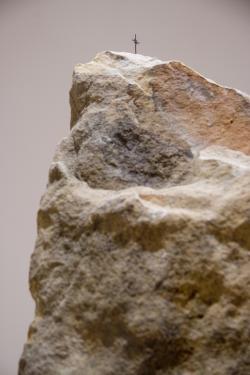 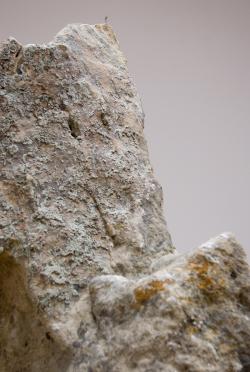 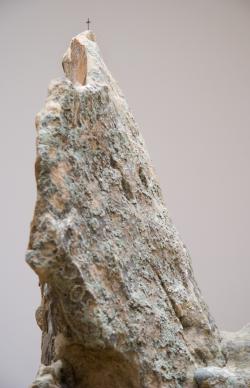 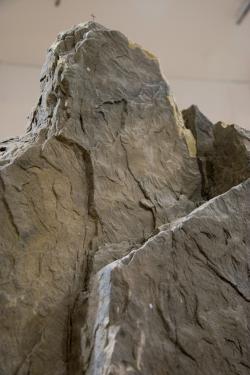 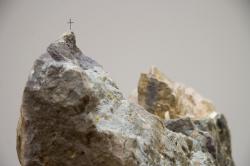 KM/S 81-8
91 x 79 x 53 cm
Standing on top of each of the large megalith-like boulders that comprise Summits (2009), Kris Martin‚Äôs eight-part found rock installation, is a small marker. When, and if, spotted, these identifiers change the viewer‚Äôs perspective and turn the room‚Äôs vaguely prehistoric ambiance into less numinous territory.

A small paper cross crowning each peak indicates that they have all been conquered, and by using a charged symbol whose real-life application connotes a range of meanings ‚Äì of man conquering the limits of awe-inspiring nature, of a civilisation conquering another civilisation, of death conquering all ‚Äì Martin sets in motion a stark thinking process.

Within the artist‚Äôs visual pun there‚Äôs also perhaps a metaphor for the importance of process in art-making itself. ‚ÄúThe top is nice when you haven’t reached it,‚Äù Martin has said. ‚ÄúBut once you get [there], the potential is gone. Dreams are what keep people going.‚Äù

Martin‚Äôs conceptual installation, repeating the same conceit eight times over, is a comment both on the futility of human ambition ‚Äì what is left once seemingly unreachable summits have been conquered? ‚Äì and also on the oppressive and absurd spread of consensual, hegemonic belief.

Reminiscent in their exotic roughness of the blue, impossibly steep and faraway mountains that steal the fantastic landscapes of Joachim Patinir and his 16th century contemporaries, these lifeless stand-ins humorously exaggerate the heights to which human foolishness and its quixotic desire can rise. ‚ÄúFor me, they’re all very dangerous, mountains‚Ä¶ They’re filled with a dangerous power, especially for puny little human beings, like we are.‚Äù

ASPEN ‚Äî ‚ÄúSummits,‚Äù a new installation at the Aspen Art Museum by Belgian artist Kris Martin, aims to strike a balance in human instincts, between the reckless, self-centered ego and striving for achievement that pushes all of mankind forward. The piece features eight boulders, each topped by a cross.

Martin, who was born near and lives in Ghent, a flat, low-lying city that wouldn't put a resident in mind of mountains, says ‚ÄúSummits‚Äù is partly a cautionary work.

‚ÄúFor me, they're all very dangerous, mountains,‚Äù he said. ‚ÄúThey're filled with a dangerous power, especially for puny little human beings, like we are.‚Äù Martin makes it clear that the danger isn't just physical. Metaphorically, there is a part of human nature that craves an ascension to heights that are not necessarily to our ultimate benefit. ‚ÄúPeople are really concerned with mountain tops ‚Äî being the richest, the most beautiful. And we often give our lives for it. The top of something is the most beautiful, the most desirable ‚Äî but that's only in our minds.‚Äù

Martin finds another note of warning, separate but perhaps related, in the installation: Once you've reached the top, the climb is over. ‚ÄúThe top is nice when you haven't reached it,‚Äù he said. ‚ÄúBut once you get to the top, the potential is gone. Dreams are what keep people going.‚Äù


Still, it's hard to see ‚ÄúSummits‚Äù as being essentially cautionary in tone. Martin's boulders are roughly the height of an adult human, give or take a foot or two; they don't overwhelm the viewer. The crosses ‚Äî inspired by the numerous cross-topped mountains all over Europe ‚Äî indicate that, yes, these mountains have been successfully summited, conquered.

‚ÄúThe top looks reachable,‚Äù said Martin, an engaging but intense 37-year-old. ‚ÄúIt's quite comforting to see the idea that someone has been there. You see the cross and you know someone's been there before you.‚Äù

In the context of the battle between ego and soul, probably the most comforting element of ‚ÄúSummits‚Äù is the cross itself. While the nature of the mountain-top cross is to be big ‚Äî you want it to be seen from below ‚Äî Martin's crosses are barely visible, barely there. These crosses are a couple of inches tall, made of paper. As Martin glued them to the boulders one afternoon last week, he gave instructions to staff members at the Aspen Art Museum on how to re-glue the crosses if they happen to be knocked off ‚Äî a near-certainty, given their delicate presence. Martin's desire was not to impose himself on nature, but to leave the barest footprint.

The work in Belgian artist Kris Martin‚Äôs New York solo debut engages quietly but directly with fundamental issues: death, entropy, the ravages of time. In a period characterized by a loss of faith in artists‚Äô ability to communicate fundamental truths, Martin‚Äôs unswerving devotion to such grand topics is striking. His ambition also makes the success or failure of individual works relatively easy to quantify: Each tends either to resonate with the clarity of a tuning fork or else miss its mark entirely, ending up seeming garishly sentimental, even trite. Curator Neville Wakefield‚Äôs astute, compact selection of compelling sculptures and comparatively less engaging works on paper was installed elegantly in an institution not known for sensitive exhibition design, allowing each object ample space.

The work in the first gallery illustrated the strengths and pitfalls of Martin‚Äôs approach. On one wall hung Mandi III, 2003, a scale replica of a train-station signboard, its all-black placards cycling intermittently but conveying no information. With its intimation of futility, of departures and arrivals endlessly deferred, the work triggers a sobering unease; one imagines its staccato clacking as the unrelenting tick of a clock. Nearby were Golden Spike, 2005, a two-inch, eighteen-carat gold nail driven into the floor, its gleaming head virtually indistinguishable from its surroundings, and Plate with milk, 2005. The former work is too precious not only in its choice of materials, but also in its hide-and-seek placement; the latter seems little more than an arbitrary paean to Wolfgang Laib and the charms of pet ownership. Yet such missteps were rare here, and the logic of Mandi III and Golden Spike‚Äîthat a simple, Conceptual art‚Äìinflected transfiguration of an everyday object can dramatically alter its meaning‚Äìunderpinned several other sculptures in the show.

Vase, 2005, for example, is a seven-foot-tall replica of a Ming dynasty vase that, per the artist‚Äôs instructions, must be smashed and reassembled prior to being displayed. This process, repeated each time the work goes on view, is entropic, as attested by its hundreds of fragments, held together by plainly visible daubs of yellowing glue, which no longer fit together seamlessly. (This dust-to-dust aesthetic brought to mind Yoko Ono‚Äôs April 2006 performance at a memorial for Nam June Paik, during which she distributed 450 pieces of a similar vase and urged visitors to promise to think of the late artist.) In another room, 100 Years, 2004, a small steel sphere, rested on the floor, seeming to absorb the room‚Äôs energy like a black hole. Like Roni Horn‚Äôs subtly asyemmtrical ‚Äúasphere‚Äù sculptures, 100 Years is not exactly what it seems: It is supposed to suffer ‚Äúcorrosive self-destruction‚Äù in 2104, a fact that charges it with questions about permanence-not only the type to worry art conservators, but also about how artworks and artists pass into history.