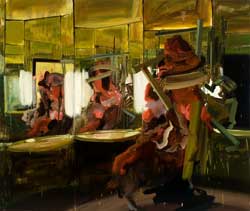 Kristine Moran
You Used To Be Alright, What Happened 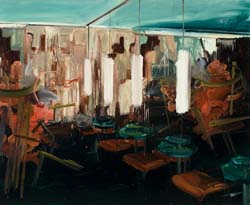 Kristine Moran
The Sensualist And The Sinner

NEW YORKŌĆöKristine Moran's aptly titled exhibition ŌĆ£Laugh Until My Teeth Fall Out,ŌĆØ her first solo show in New York, now on view at Nicelle Beauchene Gallery through July 25, presents fun and lighthearted paintings that become foreboding with the addition of disjointed limbs or dilapidated carnival rides. The Canadian-born Moran, who lives and works in Brooklyn, focuses on rituals and fantasies connected to weddings, carnivals, and other culturally significant events, using the freshness of her brushwork to draw the viewer in and the addition of subtle psychological undertones to invite further investigation.
Moran's lushly painted surfaces combine patches of high-voltage color with murky backgrounds of blues, browns, and grays. Her paintings, all from 2009, employ an energetic brush mark that creates an effect similar to the trace lines that occur in photographs when a camera is set on a long shutter speed at night. They contain clusters of wavy lines and mounds of color that, from far away, form loosely painted representational images, but up close fall apart into abstraction.
After the Last Dance presents a strong asymmetrical composition with loose passages of paint and sparse sections of impasto combined with dramatic lighting. It also includes a pair of disembodied arms surrounded by the folds of a wedding dress and a floating wedding cake. Alluding to Mary Heilmann's iconic pink and black painting Save the Last Dance for Me (1979), Moran's Dance keeps the tension of the composition in Heilmann's original but adds the arms, which fall toward the bottom-right corner of the work and imply a collapsed bride and a should-have-been-perfect day that did not go exactly according to plan.
The theme of weddings also plays into Moran's Consummated. At just 16 by 20 inches, the painting presents a landscape created from a messy paint application. This, combined with a mountain peak that could be part of a wedding dress or veil, and patches of white that allude to the dress lying bunched up on the floor, implies a passionate night, or at least the vivid memory of one. The insertion of sexual imagery into a painting with energetic abstract marks brings to mind the work of British artist Cecily Brown.
In Merry-Go-Round Broke Down, Moran presents the torso of a white carousel horse with bent legs emerging from the characteristically messy paint. The image of the horse evokes memories of childhood and, like the collapsed bride in After the Last Dance, serves as an example of a fantasy experience that has been deconstructed. Revealing the underbelly in seemingly utopian situations is a theme that carries over from some of Moran's earlier work, which includes images of car crashes, science fiction landscapes, urbanism, and visionary architecture and design. Moran studied landscape architecture before switching to fine arts, and it shows in her architectural layering of brushstrokes and in paintings like Elliptical Eccentricities, in which a building protrudes out of a dense circle of horizontal spinning lights that look like the motion blur generated from a Tilt-A-Whirl spinning at Mach 5.

In my blog post titled ŌĆ£On PaintingŌĆØ from last summer, I mentioned the painter Kristine Moran and spoke fondly of her work. IŌĆÖve recently come back to reviewing her work and musing on what it is sheŌĆÖs painting about.Her paintings often depict interior spaces such as night club dressing rooms, show rooms and private parlors that cast a dark, seedy pall on the tenor of the imagery. Her fictionalized settings house semblences of female human figures embroiled in a weird recombination of the organic / biological and the architectural. Cocophanous clouds of flesh, boat oars, wooden bannisters, wolves, chairs and rope lines collide in an unusual frenzy of violent activity. But as opposed to her earlier student paintings that illustrated total destruction, here the frenzied collisions result in a chrysalis of something apparently new. Moran hints at a generated result both grotesque and glorious, although the viewer canŌĆÖt quite be sure exactly what that result will be. This interior calamity seems to represent a psychological place within the human mind, of identity and a metamorphosis of some sort. I canŌĆÖt help but think that Moran is coming to identify with the human Id in her work, and either consciously or unconsciously trying to draw from that realm and take chances in her work. Not all of KristineŌĆÖs paintings represent interiors, as some illustrate spaces that seem to allude to a natural world with snow and forests. Others are set on public sidewalks next to buildings. Yet the violent events of some sort of disaster / rebirth remains central in those exterior environments as well.
MoranŌĆÖs early student work imaged car crashes and other such catstrophic events, of objects at a high rate of speed coming to a rapid stop via collisions with other objects in motion. From there she developed paintings representing environments, cities and urban dwellings reorganized and reconstituted by Moran to reflect an idea of urban failure bouyed by humanityŌĆÖs hunger for a utopian society. MoranŌĆÖs latest work, created mostly while completing her MFA at Hunter College in New York, appears to represent the evolution of an analytical thought process on her part, combining her previous painting themes together with a newfound emphasis on the human figure resulting in a new, as of yet unspecified whole. Along with the uniqueness of subject matter there also appears to be incremental steps in her painting technique away from a traditional formalism towards a non-representational impulse in gestural painting and a more robust, juicy color palette. See ŌĆ£Leda and the SwanŌĆØ and ŌĆ£The GiftŌĆØ. While her current transmographic narrative seems darker and signifies mankind after the Fall (tragedy), there exists an excitement about it all. See ŌĆ£You Used To Be Alright, What HappenedŌĆØ, ŌĆ£Unravelling of SelfŌĆØ, ŌĆ£Collapse of WillŌĆØ. The paintings exemplify a joy in the process and craft of painting, which for me comes through in an exhuberant manner.