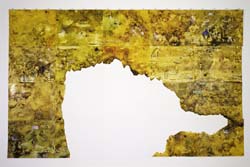 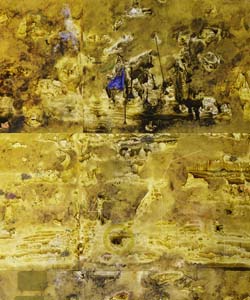 Laleh Khorramian’s abstract paintings aren’t just paintings: they are prints. Developed through an intensive process that harmoniously combines both technical skill and unpredictable results, Khorramian begins each work by making a painting onto a sheet of glass. She then transfers the image onto paper by pressing the sheets to the glass while the paint is still wet. The resulting ‘monoprint’ – or single print – is an event, an original irreproducible image, initially made without any direct contact from the artist’s hand. In Eden – 1st Generation, Khorramian uses this process to create a large scalework reminiscent of an aerial-view map. Khorramian often uses herprints to create stop-motion animations, where she combs their texturedand latent topographical imagery to find backdrops, objects,figures, and scenarios to her filmic narratives. She then proceeds todraw, wipe away, and scratch onto the surface of the print like notes
and locations of events – inventing graphic scenarios of violence, intimacy, catastrophe, and imagined or impossible scenes, much of which to be shot and recorded for her films. For example, a number of the details within Eden – 1st Generation were included in her 2005 animation “Chopperlady”. 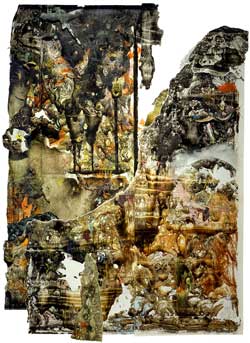 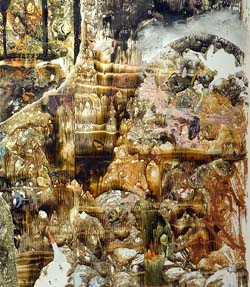 Laleh Khorramian
Some Comments on Empty and Full

Some Comments On Empty And Full was made by collaging numerous monoprints together, their abstracted patterns forming a fantastical landscape. In this piece, the monoprints have been made on semi-plastic material, a substance which both replicates celluloid and resists liquid pigment. Again Khorramian reveals and emphasizes details by drawing over and scraping into the surface with marks and note taking. The resulting smears and sluices of contrasting earthy tones are assembled in an irregular shape, giving the illusion of apocalyptic terrain. Influenced by medieval chinese landscapes and its spiritual philosophy of space, the title draws upon notions of the atom and the aggregate, the individual, growth, decay and memory.

WORLDS WITHIN WORLDS
by Fionn Meade

Once considered primarily the domain of William Kentridge, many more artists have recently begun to incorporate animation into their works as the technology becomes more affordable. Consequently, a host of young artists are beginning to establish themselves largely on the strength of their animated works. Laleh Khorramian and Jenny Perlin are two such artists, and, through very different means, each uses animation to construct dazzlingly unique meta-universes.

Animations, the 2001 exhibit at P.S.l Contemporary Art Center in New York, made abundantly clear that forcing a taxonomy upon as hybridized an art form as animation is hopeless. And, perhaps, missing the point. Consider, for example, Phillippe Parreno and Pierre Huyghe's two videos in Animations featuring Annlee, a ready-to-use anime character the artists purchased from a Japanese cartoon agency to revive with episodic and collectively-designed denouement as an illustration of the global and pervasive reach of simulated life. The Annlee project was shown alongside William Kentridge's Memo, which served as a prominent reminder of the hand-drawn origins of the medium and its ability to transport and encompass a highly personal vision through entirely low-tech means.

The contrast reveals something about the trend toward animation in the art world over the last few years; namely, the basic tools are now accessible and affordable enough that artists can experiment with the form. The medium's inherently allegorical nature, whether withdrawn into formal concerns or overtly referential, seems to attract artists with an auteur's sensibility, but its relative obscurity in the art world makes it something of a clean slate for young artists. Paul Chan's densely crowded political forays come to mind- Happiness (Finally) After 35,000 Years of Civilization (After Henry Darger and Charles Fourier), for instance-as do Shazia Sikander's meditative transpositions of Indo-Persian miniature painting into digital cartoons. Even Karen Yasinsky's stop-motion figurines, with their domestic worries and handmade charm, exhibit a desire to step away from conventional formats to inhabit territory with its own rules.

Laleh Khorramian and Jenny Perlin (whose work was also included in Animations) are two artists on the cutting edge of animation's maturation in the art world. The labor-intensive drawing in Perlin's stop-motion films weds the intrinsically romantic texture of 16mm to a discursive style that ranges through historically-minded topics, creating films that turn on wit, well researched subject matter, and sudden moments of intimacy. Khorramian, meanwhile, uses basic animation software to travel anew through her studio practice as a painter and printmaker, discovering latent worlds to awaken. While the jittery and ghostly construction of Perlin's work is additive (her sequences are deliberately arranged frame-by-frame and drawn out), Khorramian proceeds intuitively and fluidly, re-envisioning the formal possibilities of work she's already completed while also finding the way to her next series of prints or paintings. Idiosyncratic and demonstrably committed to animation as an exploratory medium, Khorramian and Perlin are offering unique contributions to this subset of film and video art.

Revising and reviving successful and discarded works, Khorramian employs animation as an aerial survey of her own work. Begun in the last year of her MFA studies at Columbia University, Khorramian's Sophie and Goya (currently showing as part of P.S.l's Greater New York) reconstitutes fragments of her previous works-monotype prints, pen and ink drawings, cutouts, oil paint textures, and odd studio remnants-as a journey into an unmoored landscape. Never quite allowing itself to become a narrative, the ten-minute film follows a character setting out through an illuminated and abstracted forest. The traveler lopes along before a color-saturated backdrop as the viewer is diverted into a series of dizzying sidesteps-a stop-motion tightrope across a concert hall, a vertiginous ramble through the hallways of a remembered home, a step into a clearing where gravity loses its grip and visages float by-only to return to Sophie ambling across what proves to be a welcomingly tranquil rendition of the dark woods.

Not to overstate any Dantean connection-the otherness here is one of multiples and abundance rather than underworldly portent-but Khorramian's imagination circles intently, moving towards an inevitable encounter, yet ready to veer off into enticing nooks and small discoveries. The captivating terrain is evocative and diverse-studies in depth of field, miniatures derived from abstract landscapes-but Khorramian always returns to the simple pace of a journey undertaken. The left-to-right gambol of the main character holds the miscellany together, serving a role not unlike a musical motif, lending an oddly epic feeling to a brisk and enthralling film. While Sophie and Goya transposes previous works into a crepuscular land, the next leg of Khorramian's animated travels-the second in a planned trilogy-will be shown in September along with related source work as part of a solo show at Salon 94 in New York City.

Jenny Perlin arranges codes, statistics, animated texts, minimal drawings, and live-action footage in her formally unique film essays. By turns erudite, wryly comic, and beautiful, Perlin's films juxtapose animated images with stop-motion renderings of appropriated texts (a 191 5 self-help manual, miscellaneous receipts, Freud's On Mourning and Melancholia, for instance). The often banal excerpts spring to life in proximity to their visual counterpart. In Schumann, for example, the composer's piano concerto in A minor provides the framework for a seven-minute film that explores imminent collapse. Stop-motion snippets of the infamously febrile composer's score are drawn out, a structuring device for a film that begins with drawings of the Brooklyn Bridge and animated lists of associated statistics and phobias, then shifts to stopmotion renderings of self-help wisdom extracted from various websites on how to supress anxiety, interspersed with Perlin's minimal drawings of trees pruned or tethered to grow in determined patterns. The result is an unsettling portrait of personal and cultural anxiety. Perlin's other short films demonstrate a similar ability to conflate wide-ranging curiosities in a condensed style that recalls the early writings of Walter Benjamin or the prose of poet Susan Howe. And Perlin's most recent installation work, Sight Reading, a multi-channel video piece recently shown at the Museum of Fine Arts in Houston, promises intriguing variations in scale and format.

Khorramian and Perlin's impressively inventive work is breathing new life into the medium of animation. Their recent pieces are self-contained worlds, following only the rules they assign. Drawn in to a close rapport with sequencing, self-reference, and the use of motif, the wonder of filmmaking-ever in the process of becoming-is made direct and tangible in their work. A newly rediscovered freedom to bring entire worlds to life is well within reach. Fionn Meade is a writer and curator living in Seattle.


SWIRL WORLD: Intriguingly personal and compelling, in a psycho-visual realm bordered by history
by Jerry Saltz

Laleh Khorramian is doing something so seemingly simple but pleasurable that it's surprising more artists don't do it: She makes aqueous quasi-abstract drawings, then films them, later adding animated sequences and other low-tech effects to create magic lantern movies and moving landscapes. Here, emaciated pixies, possessed stick figures, and golems enact obscure, vaguely mythic rituals and acts of violence and contrition. The results are velvety and visionary, although unresolved. You might think this was a collaboration between Shahzia Sikander, Roland Flexner (currently on view at Caren Golden), the ghosts of anonymous Persian miniaturists, plus William Kentridge and Kara Walker - both of whom teach at Columbia, where the 31-year-old, Iranian-born Khorramian recently graduated.

Khorramian's promising debut includes a very large drawing on a grid of 20 sheets of paper and the awkwardly titled Chopperlady, an absorbing eight-minute video that utilizes the drawing as background and stage. Khorramian has yet to master the art of melding sound and image (something her Columbia colleague Mika Rottenberg excels at); her narrative is often obscure or overloaded; her sense of timing is occasionally stilted; and her bag of technical tricks is still in formation. Yet Khorramian's work is intriguingly personal and compelling, and exists in a psycho-visual realm bordered by history, theatricality, decoration, and dreams. The stories that take place here are simultaneously about love, war, politics, and the self, and are as cosmological as they are scatological and strange.