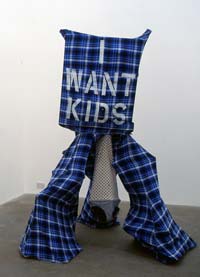 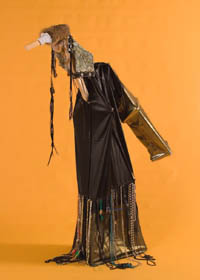 Swathed in black with fuzzy face and dangling dreads, Lara Schnitger’s Grim Boy is the epitome of skulking teenager: grody, rank, and insipid. Draping fabric over a wooden frame base, Schnitger perfectly captures the awkwardness of physical development, disproportioned and gangly, torso bugling with the remnants of puppy fat, head thrust forward in a spit of aggression. Her jostling laugh at pubescent boorishness turns quickly to horror. In the light of Columbine, and the recent spate of goth gang murders and suicides, adolescent angst poses as real threat, a demon seed bread from cultural anxiety. 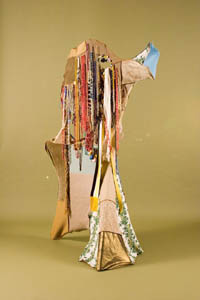 Using craft media, Lara Schnitger’s portrayals of cultural stereotypes are constructed as homespun ‘truths’, made more ’endearing’ and identifiable through their beguiling materials. Standing as aggrandised puppets, her figures are abstracted exaggerations confronting preconceptions and prejudices. Lost Hippie lumbers as a lumpy elephant of obsolescence, a virtual caravan of faded patchwork and love-bead nostalgia. An effigy of bygone innocent and idealism, Lost Hippie is met with satirical contempt and suspicion. 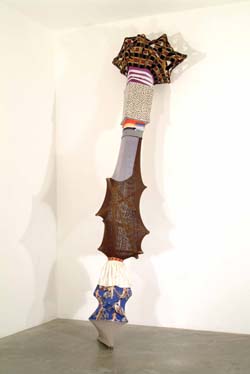 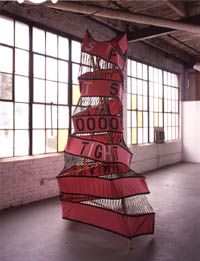 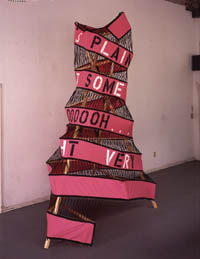 Lara Schnitger’s 126 Inches of Fun towers as an Amazonian monument: pink, sexy, and larger than life. Stretched around a wooden support, lengths of silky fabric and black lace trestle an invisible bulking form like a ridiculously contrived girdle or fashion-disaster evening gown. Emblazoned with suggestive text Schnitger’s sculpture is an icon of feminine celebration, its diva-esque architecture posing as a bulwark of womanly wiles. 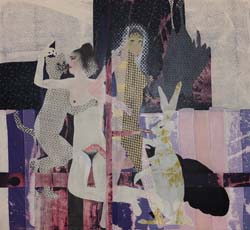 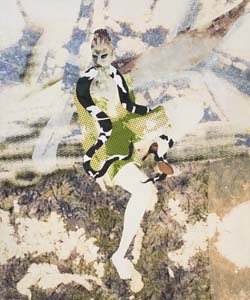 Lara Schnitger
Mistress Of The Boa

LARA SCHNITGER; MY OTHER CAR IS A BROOM


Finally back in Holland! Stroom Den Haag presents the exhibition ŌĆśMy other car is a broomŌĆÖ by the Dutch artist Lara Schnitger (1969, lives and works in Los Angeles). The presentation was previously on view in Magasin 3 in Stockholm (Sweden). Lara SchnitgerŌĆÖs work is characterized by an inventive use of textiles. She uses pieces of fabric to create both intimate sculptures and architectural installations. Her work, in which texts also play an important role, deals with eroticism, humour and politics. Richard Julin, the curator of the exhibition in Stockholm, writes about her: ŌĆśSchnitger is a vital part of a young flourishing art scene in L.A. that is very active and multi-faceted. Her sculptures and installations combine a feeling of the metropolis with that of home-made craft.ŌĆÖ

The title of the show, ŌĆśMy other car is a broomŌĆÖ, is taken from one of the texts Schnitger incorporated in the installation ŌĆśGridlockŌĆÖ. A large network made of fabric features numerous bumper sticker texts referring, amongst others, to the election campaigns of George W. Bush and John Kerry (Schnitger was very active in her support for the latter). The work also refers to Japanese construction sites and prayer flags Schnitger saw during her travels in Tibet.


In the hands of Harlem, Holland-born artist Lara Schnitger, the Harlem gallery Triple Candie resembles a crime scene, all wrapped up in that familiarly forbidding yellow tape. But instead of the warning ŌĆ£POLICE LINE DO NOT CROSS,ŌĆØ SchnitgerŌĆÖs wraps contain text fragments familiar to surreptitious late-night websurfers: ŌĆ£POPPINŌĆÖ FOAMING FANNIES,ŌĆØ for instance. The euphemistic language of fetish porn frames the viewerŌĆÖs every move at Triple Candie; you can hardly concentrate on SchnitgerŌĆÖs equally explicit sculptures without glancing up to read ŌĆ£SMELL MY PIE SWEET MEATŌĆØ or ŌĆ£TRIPLE CANDIEŌĆØ (a coy demonstration the galleryŌĆÖs own orgiastic implications for the creative/dirty-minded) from the mock police tape that hangs in the air like a static news ticker broadcasting the libidinous fantasies of each visitor.