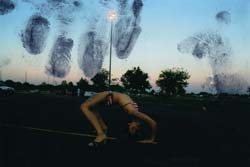 10 x 15.2 cm
IŌĆÖd always thought of ŌĆśLucky TigerŌĆÖ as a cheap Chinese aftershave lotion, its name promising its users success in the hunting of women. Laurel Nakadate may not have had this particular association in mind, but her tiger is certainly out for sexual adventure: itŌĆÖs crouching right there on the crotch of her bikini, ready to pounce. And she invites men to paw her. Posing as a Lolita updated for our times, Nakadate goes off on an American road trip with a big, virile pick-up (her work involves a lot of word-plays), posing for the camera in contemporary cheesecake mode that owes a lot to music and exercise videos, advertisements, calendars and soft-core porn. The pictures she takes are purposely ŌĆśbadŌĆÖ (another subliminal wordplay), but theyŌĆÖre really just a pretext. ItŌĆÖs what comes next that gives her work its punch: she invites middle-aged men (found on Craigslist) and invites them to fondle the pictures with inked fingers. But what they see is not what they get. ŌĆ£I want to be the one whoŌĆÖs hunted,ŌĆØ Nakadate explains, ŌĆ£[but] I also like the idea of turning the tables ŌĆō the idea of them thinking that theyŌĆÖre in charge or that theyŌĆÖre in power and theyŌĆÖre asking me for something and then I turn it on them, where IŌĆÖm the director and the world is really my world.ŌĆØ 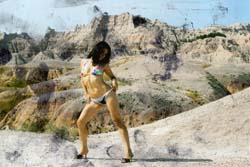 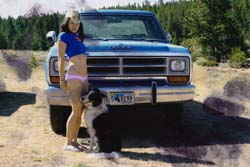 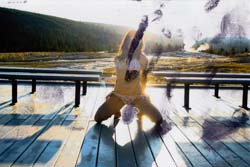 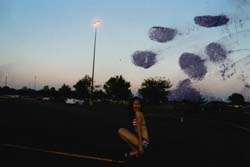 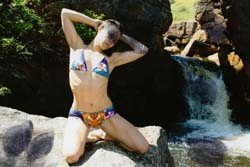 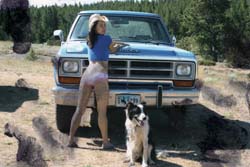 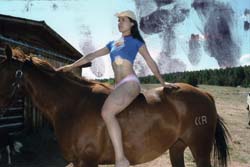 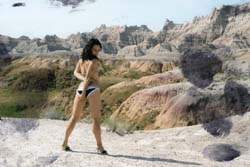 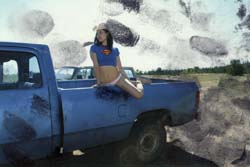 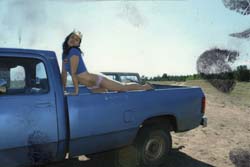 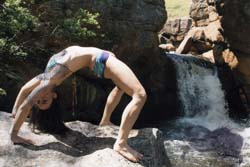 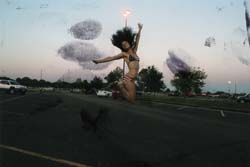 Laurel Nakadate is a photographer and filmmaker from New York City. Her work washes us in discomfort and awkwardness because she believes these to be places of profound instability and serendipity. She has made, for instance, a series of films in which she goes home with older, lonely men who approach her. Once home with them, Nakadate films everything that happens. I stumbled across one of these videos on youtube and it took the top of my head off with its bizarre blend of childishness, fetishizing, and documentary. I called Laurel up and we talked for a couple hours one Friday afternoon in March. (Her new film, by the way, is Stay the same never change. Her show of videos and photos - "Fever Dreams at the Crystal Motel"-opens in New York on May 7 and in Los Angeles on June 6.)

Rumpus: This is the age of million-dollar films. Do you spend a lot creating yours?

Laurel Nakadate: My budget is usually gummy bears and panties.

Rumpus: I have a friend who despises the word "panties." Gives her shivers. You have no qualms with it?

LN: I like the word panties. It's a childish word, which automatically makes it great.

Rumpus: Are you back in New York City now?

LN: Yep. I'm sitting on a working child's pony ride while talking to you on the phone. You know the kind they have in parks? It's a vintage one. I'm guessing from the 70's. It's black with a white mane and feet. It has a red saddle and bridle and wild gold eyes. It came from Los Angeles.

Rumpus: How did you come by that?

Rumpus: Is it attached to the floor?

LN: It's on a platform. It moves around. But it's ridiculous. I have such a small space so the pony is the main event. There's a desk, a bed, and a pony. That's why I'm sitting on it now. There aren't too many options in my apartment, and it allows me look out the window.

Rumpus: Did you do much photography before you got into video work?

LN: I started as a photographer and I went to art school to be a photographer. I studied with traditional photographers like Bill Burke and Jim Dow at the Museum School in Boston. I made a photo documentary about girls at women's schools. Wellesley, Smith, and Mt. Holyoke. It focused on the parties they threw and the boys bussed in from Harvard and the University of Massachusetts who got drunk with them

"A week before grad school started, I was standing in the parking lot at Home Depot thinking 'What am I going to document?'" says video artist Laurel Nakadate. "And this guy, probably 50, gave me his number and was like 'Call me. And if my mom picks up, tell her you met me at Home Depot.' I thought that was fascinating."

This pick-up attempt launched Laurel, already an accomplished photographer, into making a series of video art pieces that would put her on the art world map by way of New Haven, New York, and a half-dozen Amtrak trains that would take her around the country. In most of the videos she is interacting with men-lonely, single, older men, in the heartlands and the cities-and a quick scan of her footage reveals her, portraying either a girl or a woman, doing things you can't help but think she oughtn't do: getting into a car with a strange man, posing in her underwear for a creepy artist, holding a gun to a kneeling man's head as he begs for his life. In other shots she lays dead on a couch in a godforsaken bachelor pad, or sprawled and bleeding across a supermarket children's ride, and in one particularly striking image, eyes-open and chin-down on a beach, her mouth filled with sand, a body that has washed up on the shore.

"I'm very careful about having my stuff up on the internet," says Laurel, and it's easy to see why; viewed only in part and absent of context, the content of her videos would be easy to misunderstand. It is only after looking closer that we can understand why a young, single woman armed with nothing but a camera would interact with strange men at a truck stop, or accept invitations into their homes, or play-act everything from confessionals to suicides to birthday parties to murders with them.

What is she doing?

It's simple, really. Laurel Nakadate is trying to see where she fits in.

When you're standing alone in a room full of strangers at a social event and you're uncomfortable, you need something to do-light a cigarette, dash off a text, get in line at the bar. Something to give you purpose.

It's 1999 and an uncomfortable, nineteen-year-old Laurel Nakadate isn't back home in small-town Iowa anymore; she's holding up the wall at a Wellesley party outside of Boston, surrounded by girls she doesn't know. She needs something to do, and with no cell phone to check for messages, she pulls out a used 35mm Nikon that's legally the only thing in the room old enough to drink alcohol. Laurel's uncomfortable with the surroundings but comfortable with the camera. She starts taking pictures.

Four years' worth of those pictures became Girls' School, a photo project that was eventually selected for the book 25 Under 25: Up and Coming American Photographers. Before that first party at Wellesley, "I had images in my head of good girls studying, talking politely of politics over dinner, and falling asleep in their footed pajamas," Laurel writes in the book.

"Maybe it was naïve of me," Laurel tells me in person, "but I was really shocked to learn that at this all-girls school-that produces leaders and amazing women we all admire-I was surprised to learn that these girls were throwing these huge, blowout parties. So I started taking pictures at their parties and in their dormitories and document the story of these girls from their freshman year of college until they graduated." The photos that emerged are calm, unflinching, and unsensationally honest, something like a more tasteful, erudite version of Girls Gone Wild. A dolled-up, cigarette-smoking underclassman with hair done-up like a '20s flapper blows a perfect smoke-ring across her bed, with a detached and icy expression on her face. A girl on a dance floor absent of leering boys writhes through a move in a silver bikini, as if test-driving a new body. A girl in a presumably post-party state lays sprawled across her dorm bed while a life-size, cardboard cutout of Hillary Clinton stands watch, her onlooking eyes covered by a hat.


Whatever Laurel Wants
By Jerry Saltz

On the planet Heterosexual there is a race of men who lack the ability to seduce women and whom women never attempt to seduce. Their numbers are unknown, although, in some metaphysical way, all males may carry their recessive gene. Nevertheless, these men make feeble, sometimes touching, often offensive, but always failed attempts to lure women to them. Typically, these women are much younger than they are.

Enter artist Laurel Nakadate, the half-Japanese 29-year-old 2001 Yale MFA photography graduate and standout in the current "Greater New York" exhibition. Nakadate puts herself into a position to encounter these men, allowing herself to be partially drawn into the webs they hope to weave. They "hit on" her, then she strikes like a trap-door spider, responding with her own counter-proposal. Arranging to go to their apartments or elsewhere, she arrives with a video camera and convinces them to enact strangely suggestive but asexual scenarios with her.

In the video Lessons 110 (2001), she poses braless in a tank top and pink short shorts atop a table as one of these men draws her. As he looks at her, she -- the "object of the male gaze" -- looks directly at the camera, letting us know that she knows what's going on. It's all incredibly twisted. She turns from a baby doll into an avenging angel and a wolf in baby doll's clothing. Nakadate has staged birthday parties in which men sing "Happy Birthday" to her while she feigns delight. On some cosmic level, Nakadate is always "faking it." Sometimes she'll play dead while they snap pictures of her, other times she has them place a stethoscope to her chest or trace the curves of her absent body in midair. There's always a gaping hole in the center of Nakadate's world, something that echoes the disaster of prescribed sexual roles.

Voyeurism, exhibitionism and hostility merge with gullibility, cunning and folly in Nakadate's work. Not only is this creepy, it's confusing and complicated. The roles of hunter and hunted are blurred. Nakadate turns the tables on these men and also on herself. No one comes out of these Lolita-complex revenge fantasies unscathed.

The centerpiece of this exhibition is a three-channel video. Nakadate's work hasn't changed much since her first exhibition in 2002; if anything, it is simply more focused, impudent and annoying. As in a horror film, you sporadically want to yell, "Get out of there, you idiot." Interestingly, you want to yell this at the men as much as at her. In one section of the video, Nakadate toys with these would-be lotharios in their own lairs, having them either crouch in cages or crawl on the floor like dogs while she imitates a cat. The men are always off balance in these wicked games, careful not to transgress, but visibly tempted to go further. Nakadate is off balance too, but in different ways. She's always in control, a kind of aggressive "Olympia" presence, artificial, at risk, and dangerous simultaneously.

Nakadate is melding disparate bits of artistic DNA to crackerjack effect. On a visual level she's combining the force of Barbara Kruger's use of pronouns like you and we by getting us to think about her and them. She crosses this with the way Louise Lawler's photographs essentially say, "Look at the way 'they' hang 'their' art in 'their' museums," then introduces the socially constructed sexual roles in Cindy Sherman's "Film Stills." Nakadate combines these hardcore feminist photographic essences with the taboo gutter love of Robert Melee and the anti-feminism that lies at the dark heart of Vanessa Beecroft's amazingly complicated and compelling art. To this Nakadate adds her own slutty, back-alley exoticism, her vulnerability, insight and isolation.