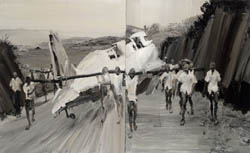 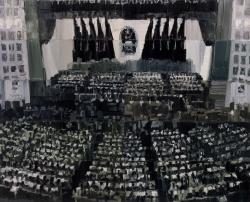 Li Songsong
This Is How We Talk Politics 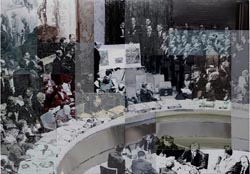 
Ai Weiwei: Could you tell me when you started to paint in this style?
In 2001, I saw the exhibition you had in a bar.

Li Songsong: What I painted was the kind of iron candy boxes we played with when I was small. Its title was "Beijing Candy." There was another one called "Digging," which depicted some soldiers digging trenches.

Ai Weiwei: Were you already painting in this style back then?

Li Songsong: Not really. The two paintings I mentioned above were done between 1997 and 1999. At that time, I just graduated from college and had not much to do at home so I painted those. This way of thinking was not especially active back then.

Ai Weiwei: The "Horse" installation that you made in Qinghua Art Academy; was it done before those paintings or after?

Li Songsong: It was before. I made "Horse" in June 2001. I started to paint these paintings during that summer when I found some old photographs.

Ai Weiwei: What was your initial thinking?

Li Songsong: Originally I wanted to paint something that had a certain distance from reality. I thought to construct a scene in painting, representing things or a certain sentiment from our real life, was not so interesting.

Feng Boyi: Have you always been interested in old photographs dealing with historical topics? How have you singled out those images that you need from a large number of old pictures? Why have you chosen topics of historical scenes and events ranging from during the revolutionary war period to after the founding of the People's Republic of China; including photographs of historical moments during the Culture Revolution, with such recognizable icons as the Conference Assembly Room to the dome of the People's Conference Hall? You don't simply use these images as historical evidences; do you consider these images as a mirror that reflects the ideology of the people at that time?

Li Songsong: Not really. The painting of the soldiers digging the trench, for example, was a picture I saw by chance. I felt attracted to the process of looking at photographs. When we look at pictures in a book, we usually turn them over when we understand the meaning in them. I painted this picture probably because I looked at it so closely. It was a very plain photograph: some people in uniform were digging into the earth on a wasteland. After I read the explanation, I realized that the people were voluntary soldiers digging a trench during the Korean War. If you look at an image long enough, you will discover other meanings in it. I've also painted images from TV, the portrait of the late Deng XiaoPing for example. At the time when he passed his portrait was on TV every day. I took a picture of his portrait and painted it. But I didn't continue with this kind of topics, including the one of the candy box. Perhaps I wanted to paint some existing and ready-made things at that time. But I didn't want to sketch a person in a conventional type of space. I wanted the original image to be something one dimensional.

Ai Weiwei: You do not have so much interest in directly taking from reality to put into paintings.
Li Songsong: I find it unnecessary. There are better approaches, photography and video for example. Just looking at live things is simply more fun. I feel that when it comes to this aspect of representing reality, painting is rather powerless.

Ai Weiwei: So when you have a photograph or a candy box in front of you, what kind of possibility would it give you? You said that painting is ineffective in faithfully representing a three-dimensional thing, what difference then would this style of painting make?

Li Songsong: I feel that it is at least equal. That is to say, the origin is something flat, something ready-made. Painting is also such a trace, of the same kind, on one dimension.

Li Songsong: A trace on one dimension. Besides, it doesn't have to be judged by aesthetic principles. There is no need to decide on the space, or to make a choice. (All you have to do is) to place something on the top. It is already responsible for itself. You simply complete?
Li Songsong: Maybe it's like reading. Simply rereading it again.

Ai Weiwei: Your idea reminds me of Jasper Johns. Of course, his paintings and yours are different in nature. Someone has discovered that in all of Jasper Johns' paintings, there was no active involvement on his side. For example, in his early works, he painted the American flag, the target, and the American map. Until the numbers he's painted in his latest works, including all the crosses appearing in various directions must have come from a graphic or text he spotted passing a barbershop or driving on the way to Harlem. His current paintings have carried on this tradition. He has never directly created forms and structures in a traditional sense and instead deconstructed a form he has come across usually in his paintings. He says, "I have little interest when it comes to creation itself. I am only doing reinterpretation. It's impossible for me to change the reality itself but I want to re-interpret it." In this regard, do you think you share some similarities?