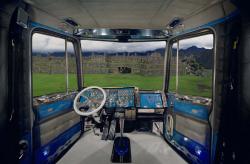 182.9 x 276.9
Luis Gispert sees his work situated at an intersection of certain arcane aesthetic ideals, notions of the constructed photographic image, and an interest in concepts of the picturesque and sublime in landscape photography. Unlike a number of his fellow artists, however, he has no interest in a seamless weave; on the contrary, itâ€™s the rough seams that give the work its vigour. Gispert puts the viewer in the back seat of richly upholstered cars or trucks and takes us off on a ride through the Californian desert and the Grand Tetons. Or so it would appear. Itâ€™s hard not to think of these interiors as a video game, but fact is stranger than fiction, and facts they are â€“ of a kind. 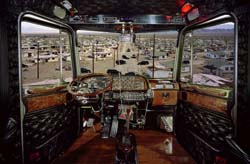 The rich fabrics are real enough, lovingly installed by the vehicles’ proud owners, but the deception starts here. Burberry? Gucci? Stephen Sprouse? No, knock-offs. Real vistas out those windows? Well, yes, but transplanted thousands of miles. Have we perhaps already arrived in postpostmodern Paradise, where vehicle owners appropriate logos and artists appropriate vehicle owners? “There’s a double meaning,” admits Gispert, and it’s there in the series title, Decepcion.

Luis Gispert is a young contemporary artist born in Jersey City, New Jersey, and raised primarily in Miami. He trained first at Miami-Dade Community College and then at the Art Institute of Chicago and Yale University. Today Gispert lives and works in Brooklyn.

His earliest creative recognition was tied to his participation in a group of young South Florida-based artists who challenged the reigning paradigms of Latino/a representation in that region. Gispert's vividly colored photographs and booming sound sculptures have since been shown widely throughout the United States as well as in Europe, South America, and the Middle East.

The multimedia installation he created for the 2002 Whitney Biennial was one of the most critically acclaimed elements of that exhibition, and his work has become a virtual mainstay in recent surveys of contemporary art practices.Gispert's work cannily explores and confronts familiar aspects of youth culture, art history, hip-hop music, and, most recently, the artist's own Cuban American background.

As a young Cuban-American, the artist brings an insider's perspective to an investigation of ethnic youth culture, exposing incipient ties to music, power and gangland activity by constructing modern tableaux based on the iconography of Western religious art, specifically, from the Baroque and Renaissance periods. Asserting that hip hop is the contemporary Baroque, Gispert adopts signifiers from that subculture to address societal views and investigate identity politics.

Utilizing what is a somewhat fetishized figure, the cheerleader, and removing her from her normal conditions, Gispert draws in tangential issues of sex, drugs and gang warfare in a slightly humorous and innocuous way. He poses young women in cheerleading outfits-primarily Latinas-against vivid, chroma-key green backgrounds in seemingly minimal compositions. On closer view, however, details emerge-gaudy gold jewelry, makeup and elaborate body positions (often set-ups with suspension wires)-substantiating an intricately layered underlying concept. These are not simple documentary photographs; instead, they are complex, composed arrangements that delve into the familiar and the unknown, the mainstream and the marginalized, to expose and address the various subcultures currently infiltrating the mainstream.

Gispert also attempts, while using the social leveler of a uniform (in this case short pleated skirts, short socks, gym shoes and V-necked sleeveless sweaters), to erase the sense of 'other" so pervasive in our society. Functioning as a critique of race relations and varying levels of marginalization, Gispert's work also addresses hip hop's trajectory from an African-American subculture adopted by Latinos, to its current place in the mainstream. The artist's inclusion of excessive bling bling and various gangland signifiers-guns, hand signals-is indicative of this crossover.