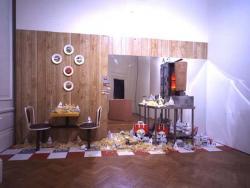 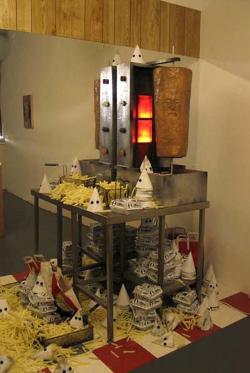 
King Tat is a newly commissioned installation by Shaun Doyle and Mally Mallinson at the John Hansard Gallery in Southampton. Even before arriving at the gallery, one question arises: who was King Tat? Is he a composite of peoples, of people who the local newspaper report as being found dead surrounded by a life-time of mouldering possessions and hoarded junk; or was he a real person? Whatever the case, in creating this celebration to the recently departed Doyle and Mallinson have transformed the Hansard galleries into a gigantic reliquary containing an installation that is equal parts solemn and humorous, and imbued with barely concealed social commentary.

The artists found inspiration for the tomb of King Tat in a recreation of Tutankhamen‚Äôs tomb exhibited at the British Empire Exhibition at Wembley in 1924. Doyle and Mallinson‚Äôs installation retains the stagey feel of the 1924 original, and begins with a corridor clad with woodchip wallpaper that ushers the viewer towards an antechamber. One wall of this chamber has been cleaved away ‚Äì as if visited in the night by the ghost of Gordon Matta-Clark ‚Äì revealing a dank and dusty room filled with junk and clutter that is more Bargain Hunt than Pharaoh‚Äôs tomb. In one corner is a small red car intended as a poor man‚Äôs chariot to the next world. How it managed to end up in what appears to be a cramped council flat is another matter. However, its inclusion adds to the pervading gloom; melancholy hangs in the air accentuating a sense of the recently departed; time appears to be suspended. A heap of junk is piled alongside the far wall ‚Äì a digital alarm clock twinkles in the gloom, old clothes, bric-a-brac and piles of books jostle for place on old cabinets and sideboards. There is a definite sense of a personal history here allied to a sense of obsessive collecting. However, the air of sadness is exacerbated when one realises that the worthless objects laid out here, no doubt precious and personal to their former owner, serve only as a pitiful indictment of a life gone unnoticed.


In 1891 the Dutch anatomist and sometime surgeon, anthropologist and paleontologist Eugene Dubois discovered an epoch-defining archaeological find named Pithecanthropus erectus. Loosely translated as ‚Äúape-human which stood upright‚Äù and known around the world as ‚ÄòJava Man‚Äô, Dubois‚Äô discovery of a fragment of skull and a solitary leg bone served, amongst other claims, to add weight to Charles Darwin‚Äôs Theory of Evolution.

Continuing debates within the scientific community challenge Dubois‚Äô discovery, particularly with regards to its true classification and origins (it has since been re-named Homo erectus, an early hominid), with some evolutionists still firmly convinced it is evidence for their holy grail: the missing link. Missing links, superstition and long-held beliefs provide the basis for the playfully anarchic work of Shaun Doyle and Mally Mallinson; for them the fact that a missing link would provoke and challenge the creationist theory that the Earth was created approximately 6000 years ago is manna from an illusory heaven. Doyle and Mallinson unearth and expose the contradictory and inflammatory tenets inherent to the main world religions with a gleeful relish mixed with pitch-black humour. In fact, they often tread a fine line that at times could see them the target of retaliatory attacks by religious extremists, particularly when considering their installation The Garden Centre of Gethsemane (2006), complete with a Christ figure, situated in an inflatable paddling pool, with eyes gushing blood.