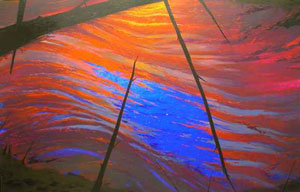 Marc Handelman
Our Banner in the Sky

226 x 365 cm
Our Banner in the Sky is based on an iconic 1861 Civil War propaganda painting of the same title by Hudson River School artist Frederick Church, in which streaks of red and white cloud fill an early dawn sky behind a dead tree to form an almost abstract double-image of the American flag. Widely circulated in the form of a mass-produced print, it was intended to rally Union supporters, indicating a victory prefigured in the heavens. Handelman ramps up the illusionistic, visionary power of the original painting by greatly increasing its size, while at the same time cropping it to strip away its surrounding landscape. Furthermore, the flag itself has been inverted, a defiant gesture on the part of the artist to express his own ambiguity of feelings regarding national identity, ideology and morality in the contemporary political climate. 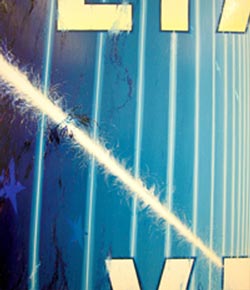 227.3 x 193cm
Adopting the languages and motifs of iconic images, Handelman’s paintings crop, manipulate and invert their sources to formulate abstracted and fragmented fields that resound with the uncanny. Through this re-ordering, Handelman forges parallels between media, kitsch and spirituality. Inspired by American Luminists such as Frederic Edwin Church and Fitz Hugh Lane, Handelman’s canvases incorporate light as a dramatic tool, simultaneously conjuring associations of grandeur, heraldry and divinity, while underscoring their representation as artificial constructions. 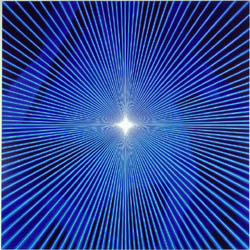 Marc Handelman analyses and repackages the power of visual images. His work questions the relationship between aesthetics and ethics, making references to the glory of nineteenth-century American landscape painting, political propaganda, Nazi architecture, photo-journalism, advertising, and the USA’s most beloved home decor artist Thomas Kinkade. Choosing his sources for their contemporary and historical associations with politics, religion and social ideals, Handelman pastiches the alluring visual strategies of dogma and propaganda. Expropriating these dynamic genres from their associated ideologies, Handelman’s canvases reverberate with hollow splendour, creating a critical meta-aesthetic reflective of a new global outlook.


Landscape might be seen more profitably as something like the ‚Äúdreamwork‚Äù of imperialism, unfolding it‚Äôs own movement in time and space from a central point of origin and folding back on itself‚Ä¶
-W.J.T. Mitchell
Marc Selwyn Fine Art is pleased to announce Scenes From the New Miasma, the debut Los Angeles solo exhibition of New York based painter Marc Handelman.
Marc Handelman‚Äôs paintings explore the intersection of power, propaganda, national identity, fascism, beauty, and kitsch through subjective fantasies inspired by the rhetorical and visual legacy of nineteenth century American Landscape painting.
Marc Handelman constructs paintings that seek to dismantle, reify and complicate the seductive relationship between beauty and the moral delusion so often embedded in aestheticizing processes. Drawing from sordid discourses and histories both real and imagined and within a shifting visual framework at once representational, symbolic, and abstract, Handelman‚Äôs paintings conflate spaces that both stabilize and disrupt a comfortable recognition and relationship to his subjects.
Light is a reoccurring motif and subject in his work. From the blinding and annihilating atmosphere of 19th century Luminist canvases and Albert Speer‚Äôs (the Nazi architect‚Äôs) Cathedral of Light to its contemporary manifestation at Ground Zero and use within military intelligence operations and advertising, light functions as the entry and vanishing point of the viewing subject.

Marc Handelman is a tricky painter. ‚ÄúWarm White Blizzard,‚Äù his current solo debut at Lombard-Freid Fine Arts, consists primarily of landscape paintings, each rendered with a kind of swoony technical bravura and revelry in the possibilities of materials.
‚ÄúHypothetical,‚Äù the first painting that one encounters upon entering the gallery, is a large-scale pastoral scene that sets up the contextual framework for the entire exhibition. The end of a road empties out into a shallow glen where the viewer is overwhelmed by a palpable yet impenetrable white light. The lush, manicured implications of the landscape suggest a golf course or a wealthy gated-community rather than a scene of untrammeled nature. The sparkle of fantasy is heightened by a collection of delicious scratched, scraped and flicked brushstrokes that could come directly from a Bob Ross ‚ÄúJoy of Painting‚Äù video.