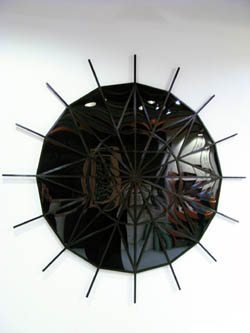 243.8 x 243.8 x 3.8 cm
Approaching his practice as a means of self-exploration, Marc Swanson’s work examines the notion of masculine identity through a variety of media ranging from film, to sculpture, installation, and painting. Reconciling queer sensibility with the ultra conservatism of rural folk arts, Swanson’s Psychic Studies approaches themes of power, spirituality and tradition through an aesthetic of heightened sensuality. Psychic Studies takes the form of a large reflective wall mount; its radial motif suggestive of a web, shield, mystical symbol, or hunting lodge fixture. Constructed from painted wood and mirrored acrylic, Swanson’s form exudes the timeless potency of artefact and the illicit allure of kitsch. 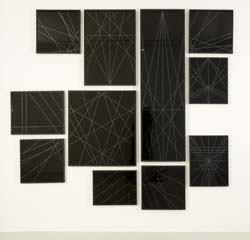 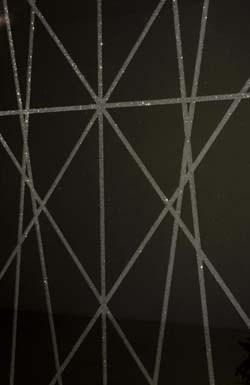 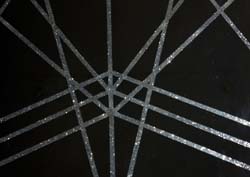 Previously known for sculptures of sequined deer and other strange fauna, Marc Swanson seems to be hunting different trophies in his current show. Although a pile of sparkly black antlers greets visitors, a nearby wall-mounted caseŌĆöa sort of reliquary containing a grungy football jersey and a swath of glam fabricŌĆöindicates that the artist is shifting his aim from animals to humans.
Also new is the incorporation of geometric patterns or diagramsŌĆörelated, apparently, to personality testing and psychiatric evaluationŌĆöinto several of the pieces, most chillingly Love Is All Around (2007), a video created with Neil Gust. In it, we see a shirtless young man with devotion tattooed across his chest posing against a tinseled backdrop in a red-lit room. A network of lines running over and behind him suggests that not only is his body being subjected to some creepy kind of analysis, but his mind is too. In the back gallery, viewers find themselves similarly dissected, thanks to two sculptural installations incorporating mirrors behind radiating webs of string and wood.
Even more disconcerting is another vitrine in which grimy T-shirts are covered in latex to form a giant hide pierced with thin gold chains. The piece recalls an earlier Swanson effort created out of T-shirts, a sort of boat sail evoking sweaty, erotic camaraderie. But here, the resemblance to flayed skin, and the dark undercurrent of the other works in the dimly lit gallery, sends a far more sinister message.

For a young gay man coming of age in the nightclub world, lifeŌĆÖs lessons are often obscured or refracted by endless halls of mirrors, Mylar and Plexiglas. The possibility for transcendental experience in that closed-off world is the focus of Love Is All Around, a short video installation by artist Marc Swanson and Outside editor Neil Gust.Before becoming a full-time filmmaker and editor in the mid-1990s, Gust was best known as co-founder of Portland band Heatmiser alongside singer-songwriter Elliott Smith. HeŌĆÖs won three Association of Independent Creative Editors Awards for his work with Jaguar since joining New York-based editorial company Outside in 2005.Over the years heŌĆÖs collaborated on several video art projects with his long-time friend, visual artist Marc Swanson, a former club kid whose work draws upon both highly personal experiences and formal, academic references.Love Is All Around is a heady, sensuous trip into the darker corners of gay nightlife. The film, which follows a young man on a nocturnal sojourn to a nightclub, is designed to be projected on a white rectangle in a room of black Plexiglas so it reflects upon itself. The presentation mirrors nightclub d├®cor in order to draw viewers deeper into its disorienting world of strobes, sweat, glitter and geometry. Gust co-shot and edited the film and composed its abstract soundtrack.ŌĆ£This is what it feels like when you want to go to a club, when you get there and when you leave,ŌĆØ says Gust. ŌĆ£ItŌĆÖs pretty formal and experiential.ŌĆØLove Is All Around, which was recently bought by the Museum of Modern Art (MoMA), debuted last year as part of SwansonŌĆÖs solo show at the Bellwether Gallery in New York. It also featured in a night-themed art exhibit at Hunter College timed to coincide with the MoMAŌĆÖs ŌĆ£Van Gogh and the Colors of the NightŌĆØ show. Swanson and GustŌĆÖs third video installation, Darkroom, will be included in an exhibition at the Saint Louis Art Museum early in the New Year.
YouŌĆÖve worked with Marc Swanson for several years. How did you start collaborating?
IŌĆÖve known Marc for longer than I havenŌĆÖt - heŌĆÖs an old friend who used to be a club kid. He became a fine artist over many years. I used to visit him in San Francisco when I lived in Portland and then he lived in New York and convinced me to move to New York. When I moved here he saw the work that I was doing to make a living and he thought we should collaborate on making a video. We started filming stuff in his studio and putting it together and weŌĆÖve made three or four videos now. The second of which is [Love is All Around].
Where did you shoot the film?
We set stuff up in his studio and we went out to his dadŌĆÖs property in New Hampshire and set up strobe lights and Mylar curtains in the woods and shot in restroom bathrooms on the way out there. We tried to create this big, all-silver, red, blue and black world.
A lot of it has to do with gay bars and backrooms and bath houses and this super closed-off world of hidden-in-plain-sight gay stuff. So, the film Love is All Around is about the cycle of desire and how it builds up and is released and how it builds up again and is released. The films are meant to loop endlessly. ItŌĆÖs less like this now, but when Marc and I were much younger and going out, gay bars often had mirrored windows so you couldnŌĆÖt see in, or theyŌĆÖd put black Plexiglas up against the glass so as youŌĆÖre walking by youŌĆÖre reflected in black and you canŌĆÖt see in.
A few reviewers have described Love Is All Around as ŌĆśnostalgicŌĆÖ. Is that fair to say?
I donŌĆÖt have anything to say about nostalgia. What weŌĆÖre trying to do is get up on screen what it felt growing up and coming to middle age as gay men. A lot of that is done by yourself. ItŌĆÖs difficult to talk about because with Marc and me itŌĆÖs all so intuitive.

This exhibition is a representation of the artist's continuing pursuit of self-awareness via the artistic process. Consisting of three main components, it is as if the work has been dreamed up by Swanson's subconscious manifesting in glitter and etched mirror-paintings, hand-made glass sculptures, and a large-scale dioramic installation.

The black glitter and mirror pieces, inspired by carnival novelty prizes, are arranged horizontally against the entrance wall. They form a dichotomy between the fantastical and self-exploratory. The etched mirrors, inspired by self-reflection and personal perceptions, consist of a singular image, such as a colored target, a peacock, a flying goat, and the pop icon Madonna. These mirrors have been partially scratched off and much like Swanson's earlier rhinestone covered objects these reflective surfaces play upon feelings of diffidence, desire and acceptance. They are glamorous objects full of aspiration, memory and nostalgia.

Also in the front gallery, five glass arrows seem to have been shot into the wall. These sculptures act as poetic anachronisms, futile and impossible in reality, but pleasurable for their romantic gesture.

Greeting the viewer in the rear gallery is a full-scale installation. A wooded mise-en-scene is composed of 17-foot beech and hemlock tree trunks framed by a canopy of tree branches acquired by the artist from the woods behind his father's property in rural New Hampshire. In a gesture not unlike gilding a lily, Swanson has painted a peacock re-presenting it in a forced acrylic palette. Swanson employs the peacock as a symbol of male allure though it is underscored by a sense of self-questioning as the artist continues his exploration of the self. Handmade wasp nests and cages full of old liquor bottles hang from above in this forest of the subconscious. They are overt allusions to danger while the bird's nests allude to safe havens.